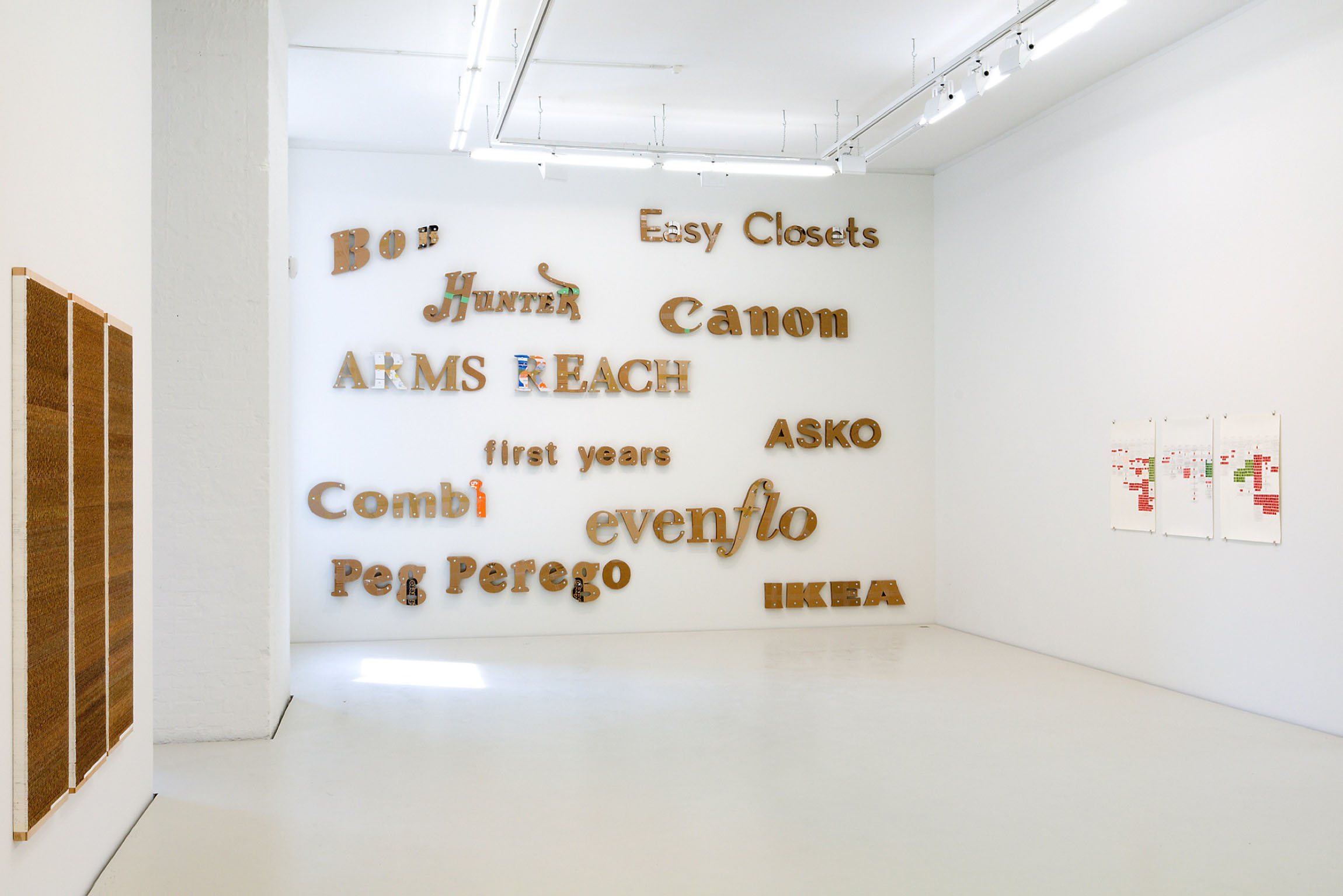 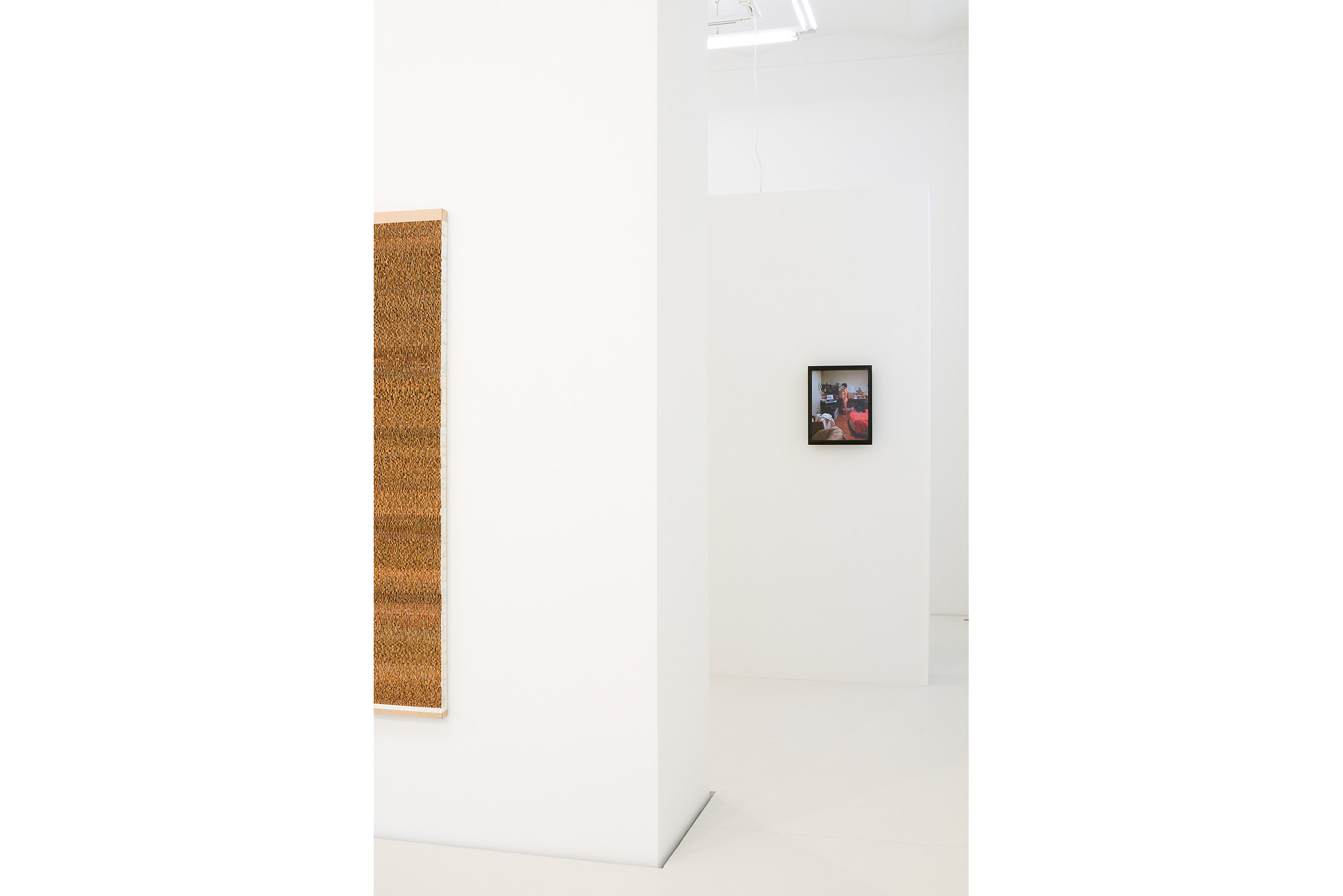 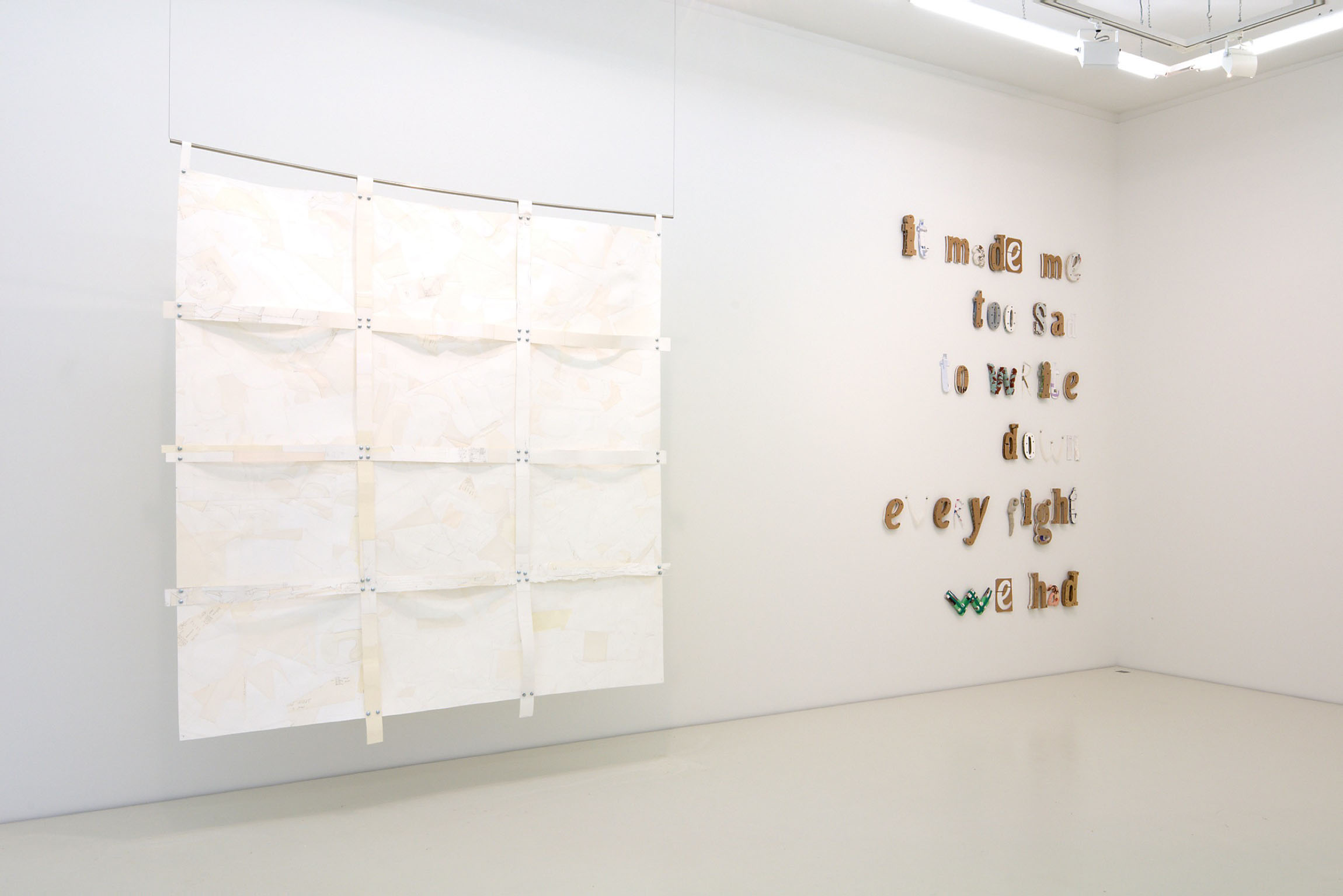 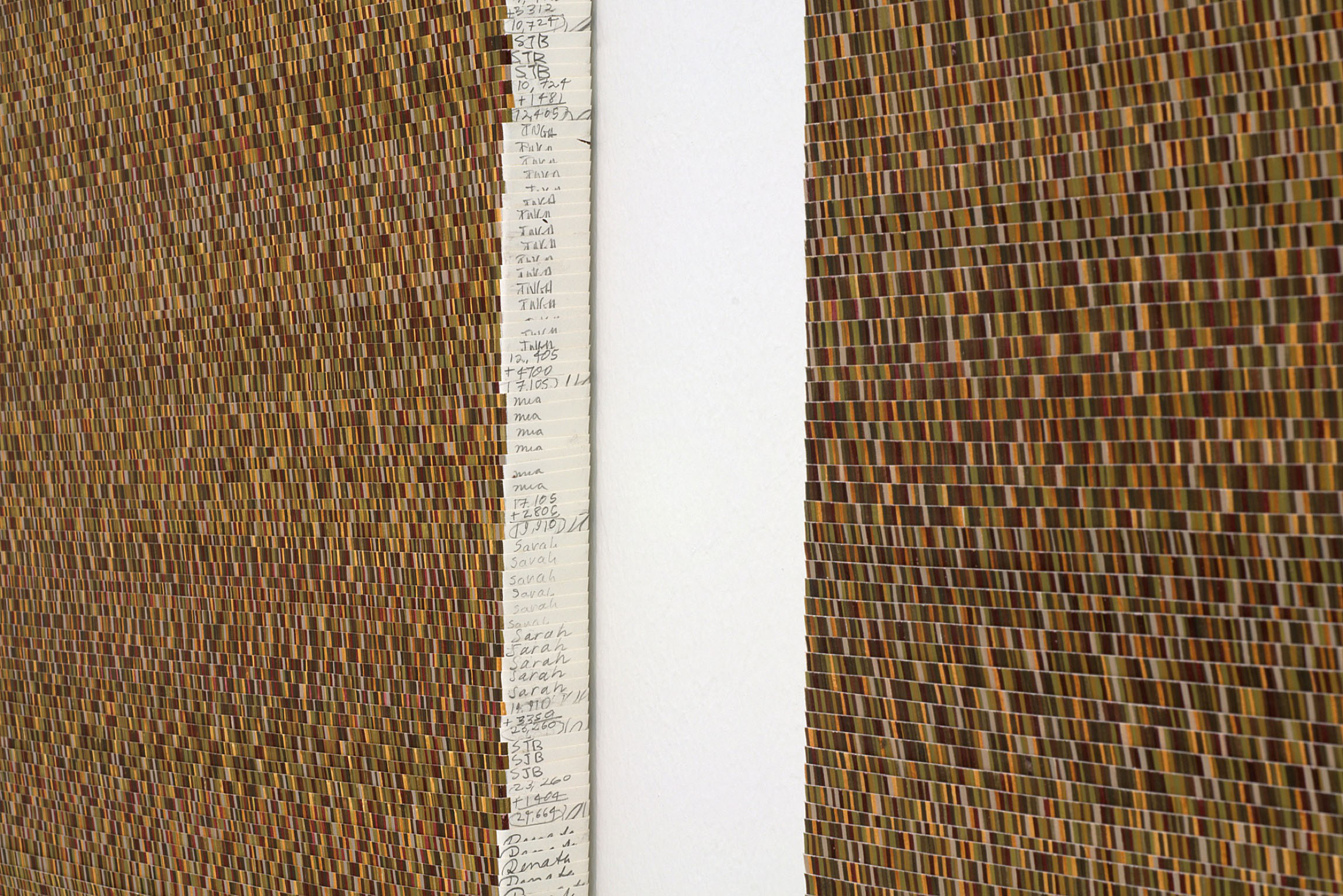 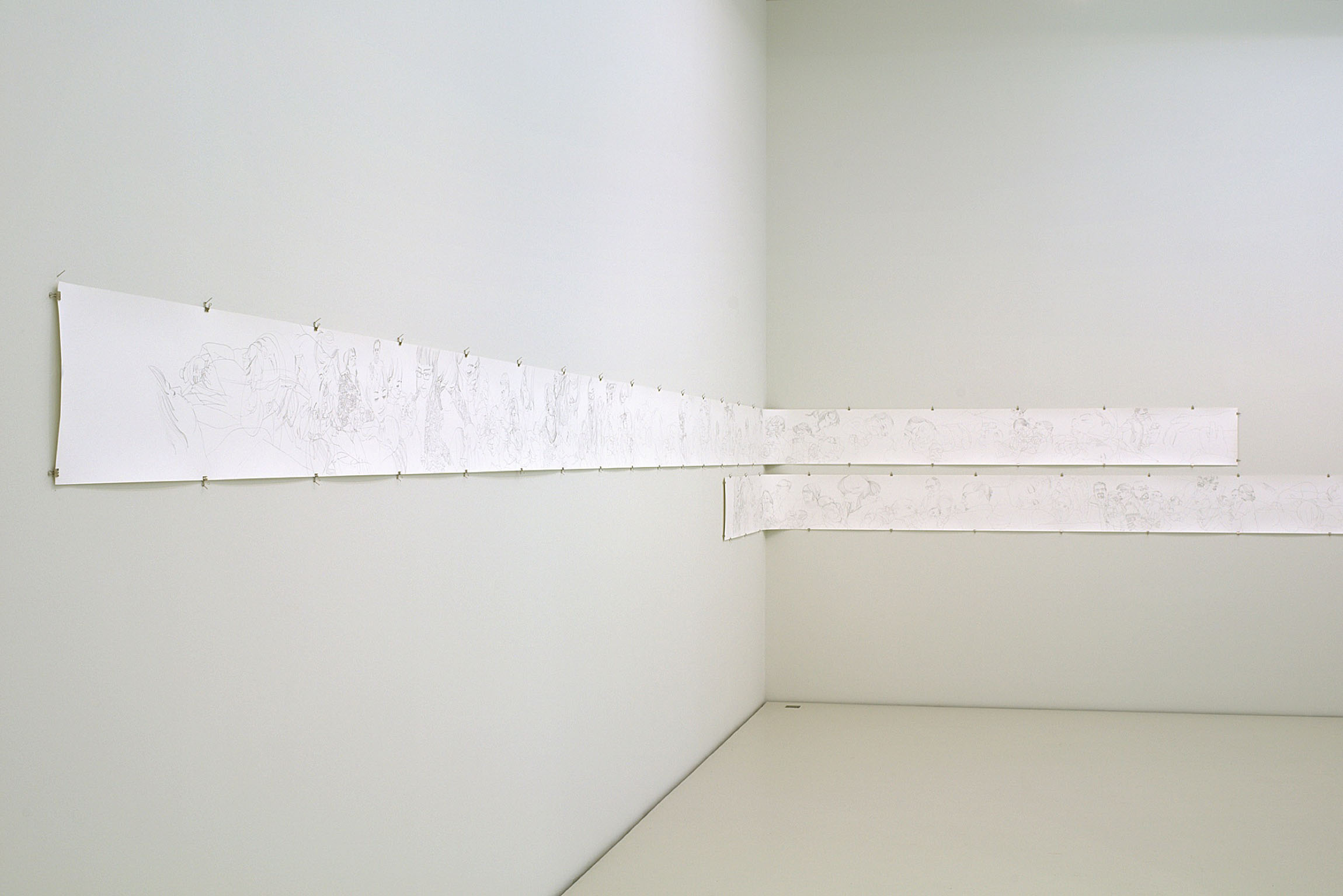 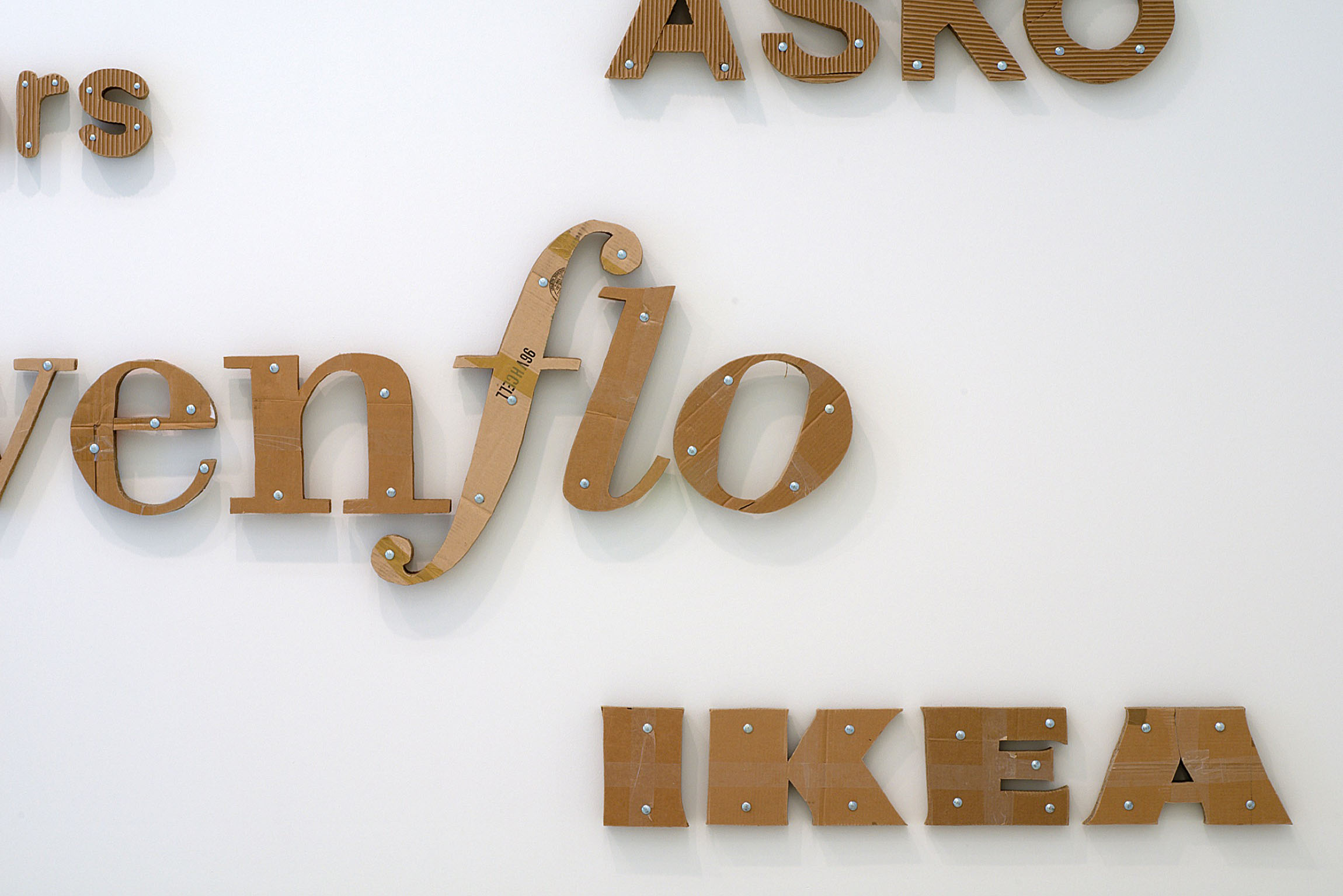 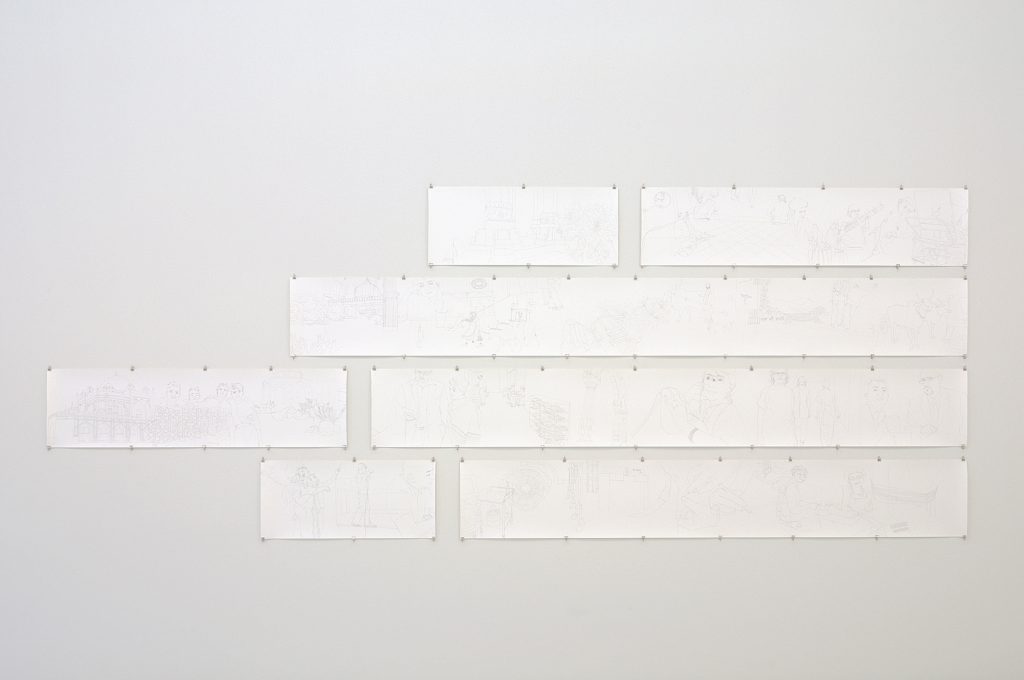 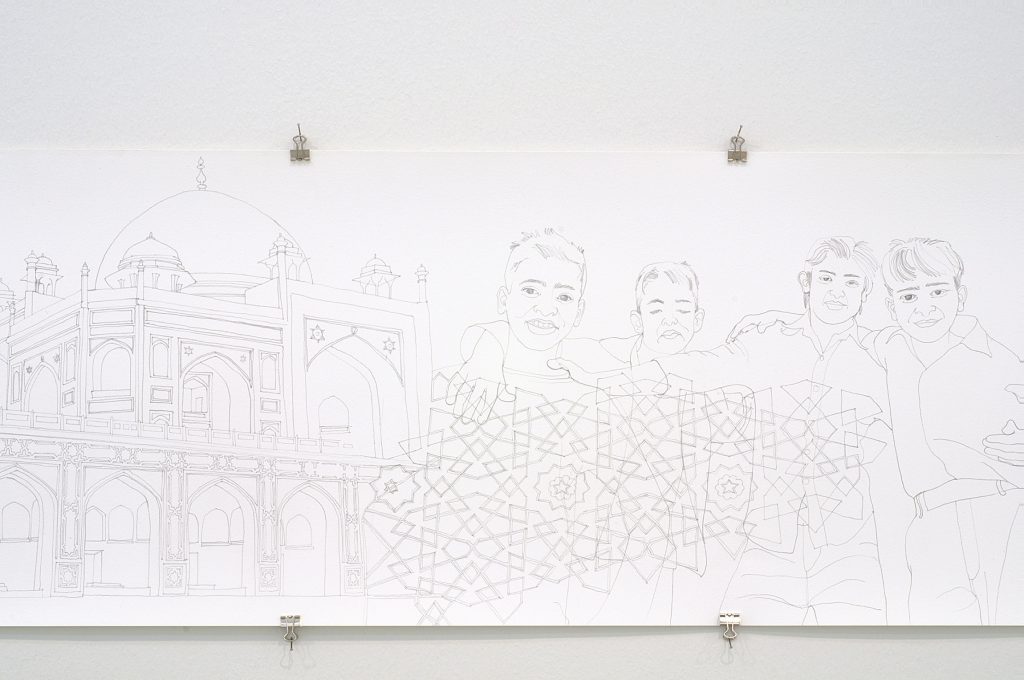 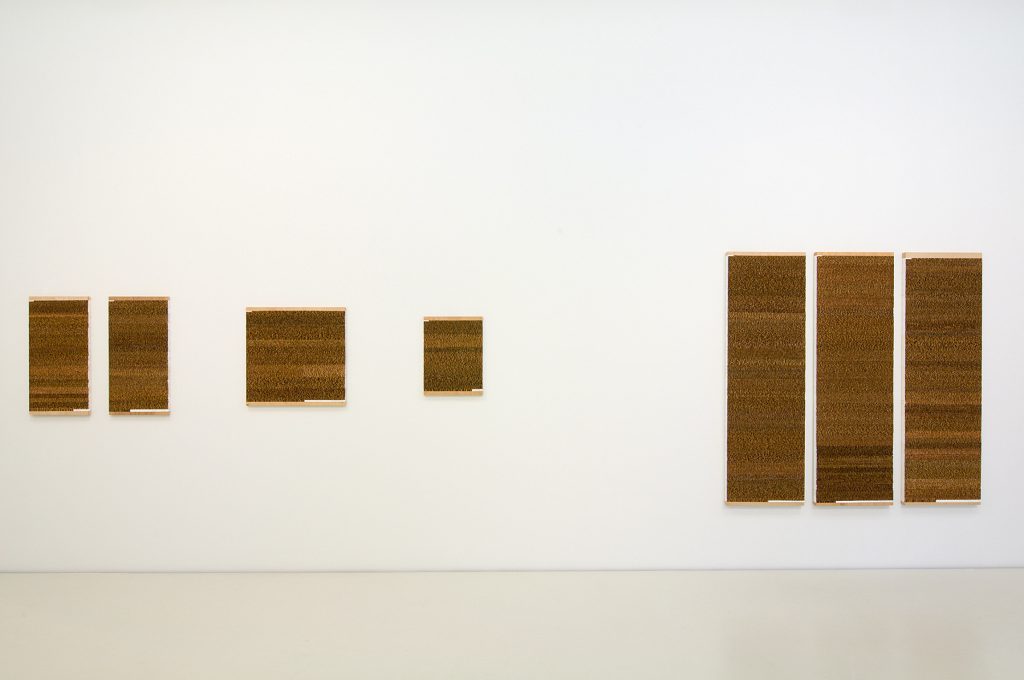 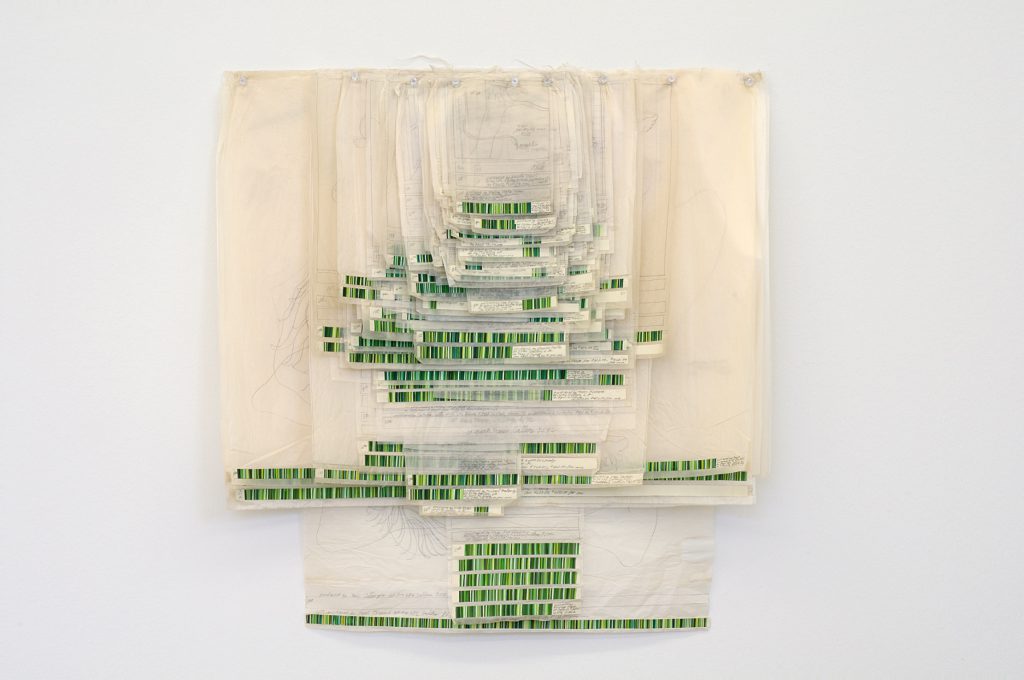 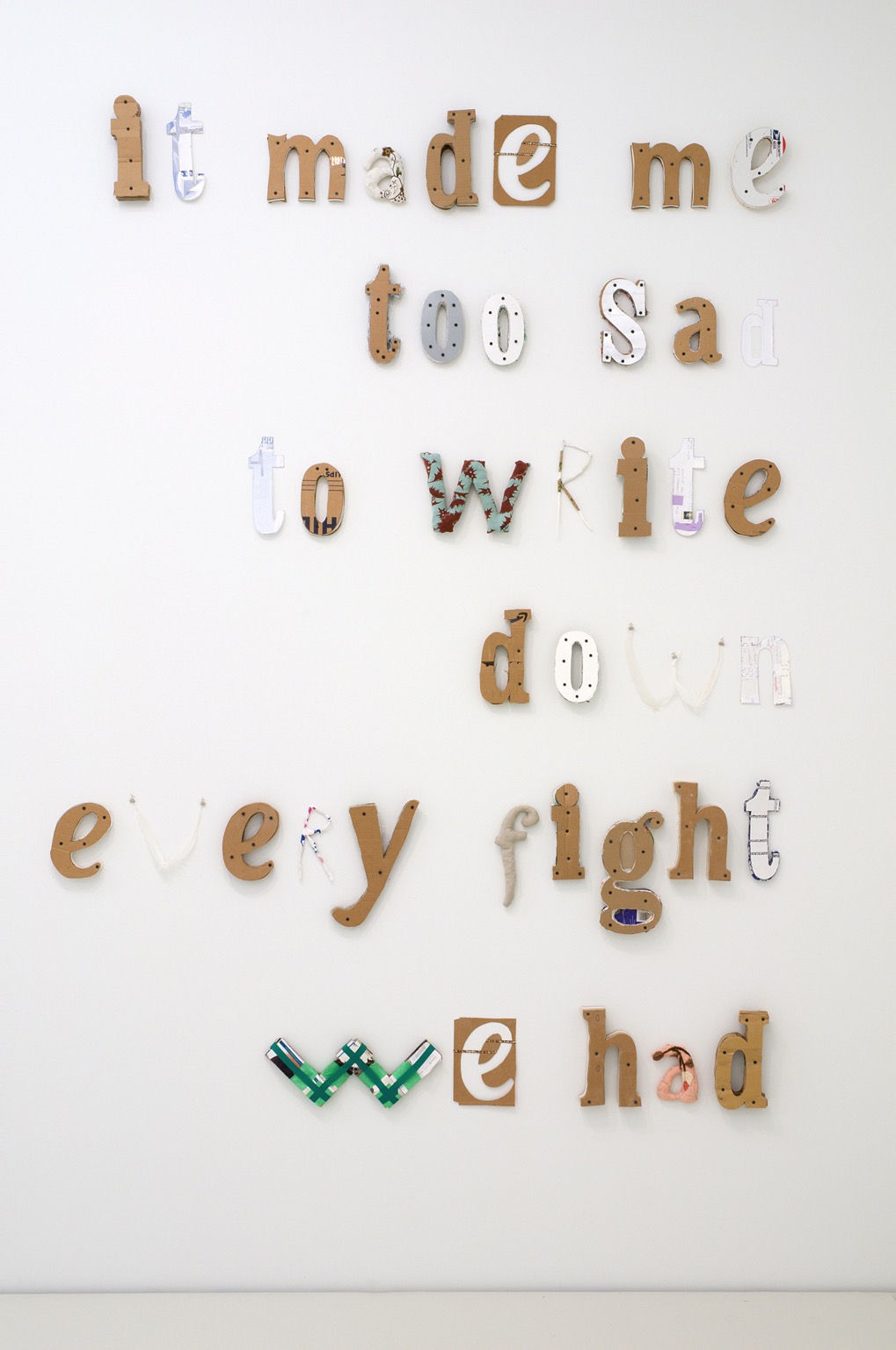 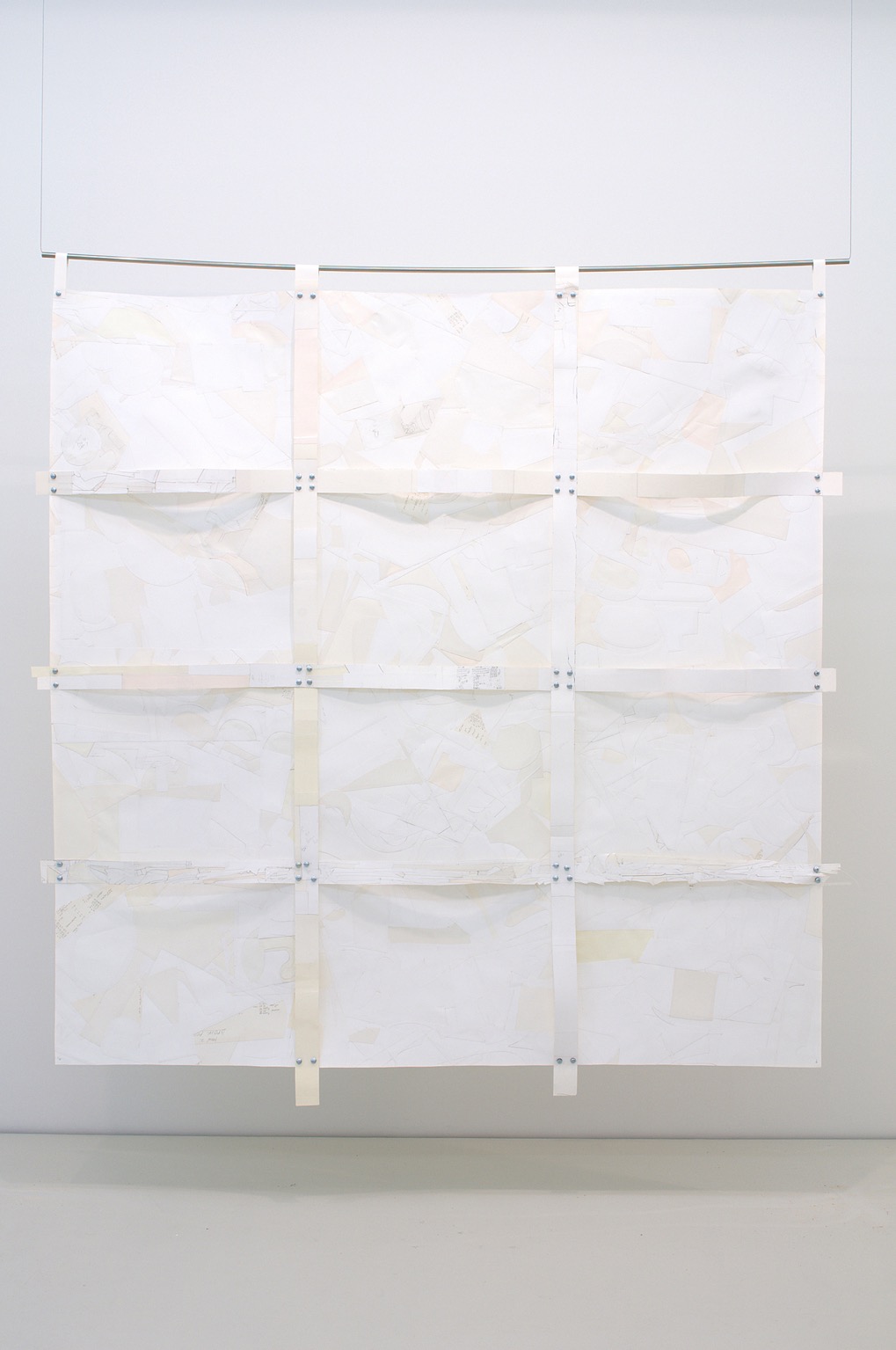 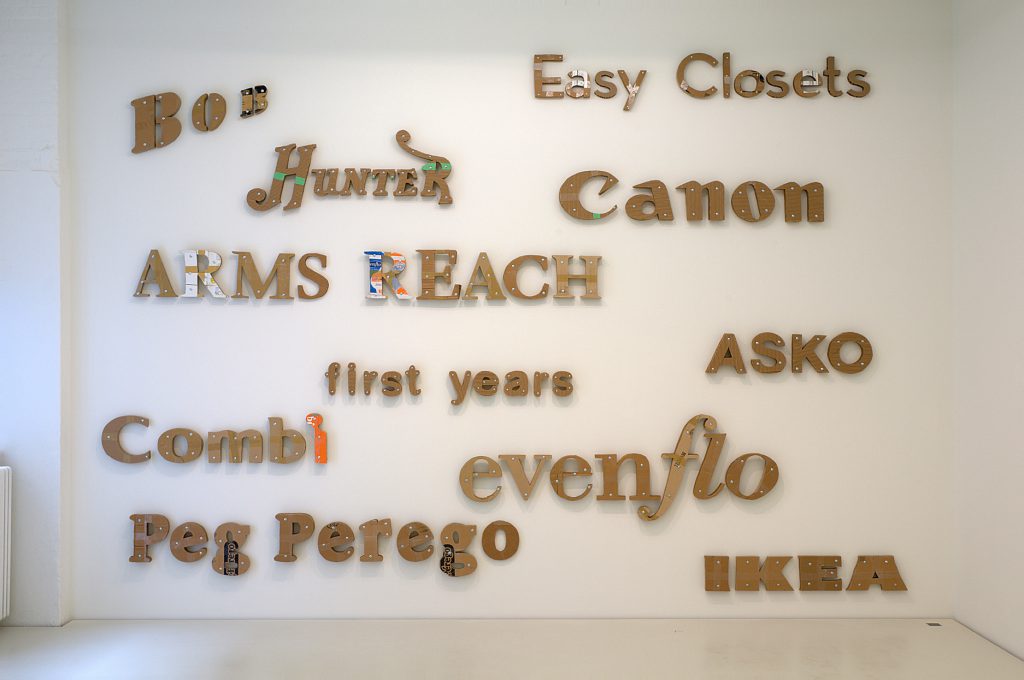 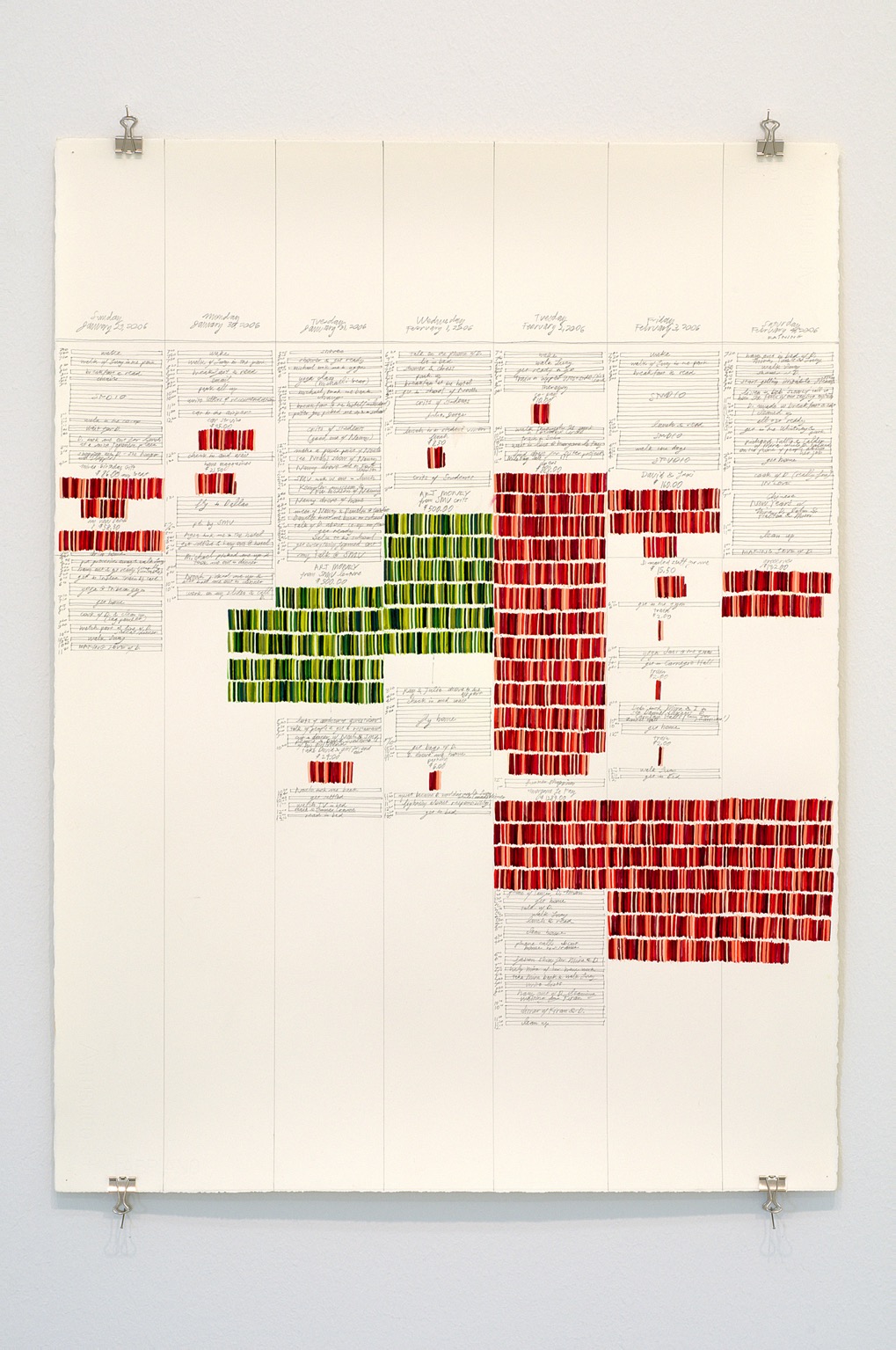 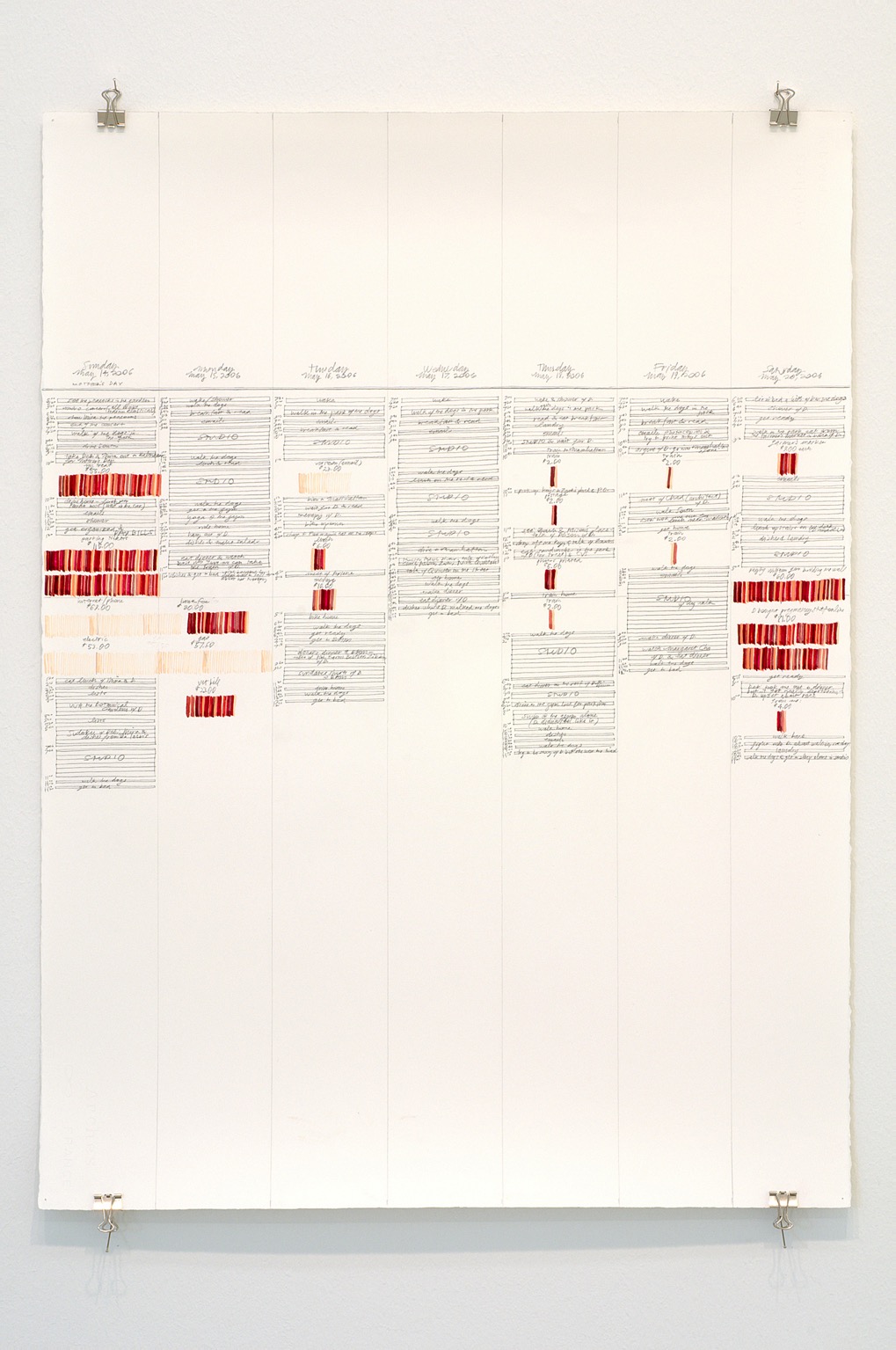 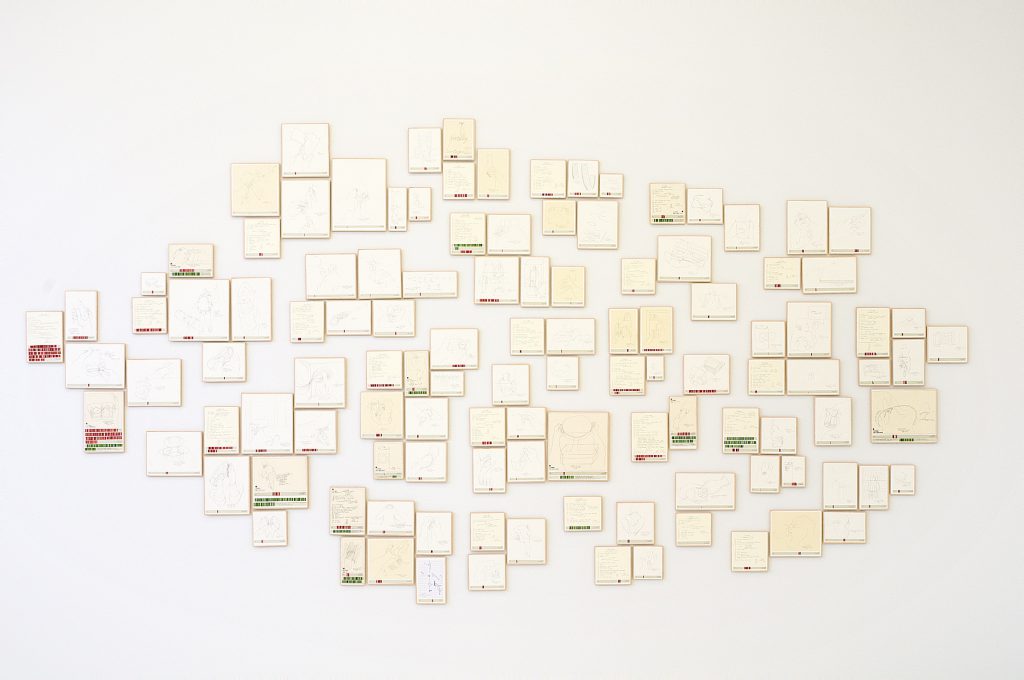 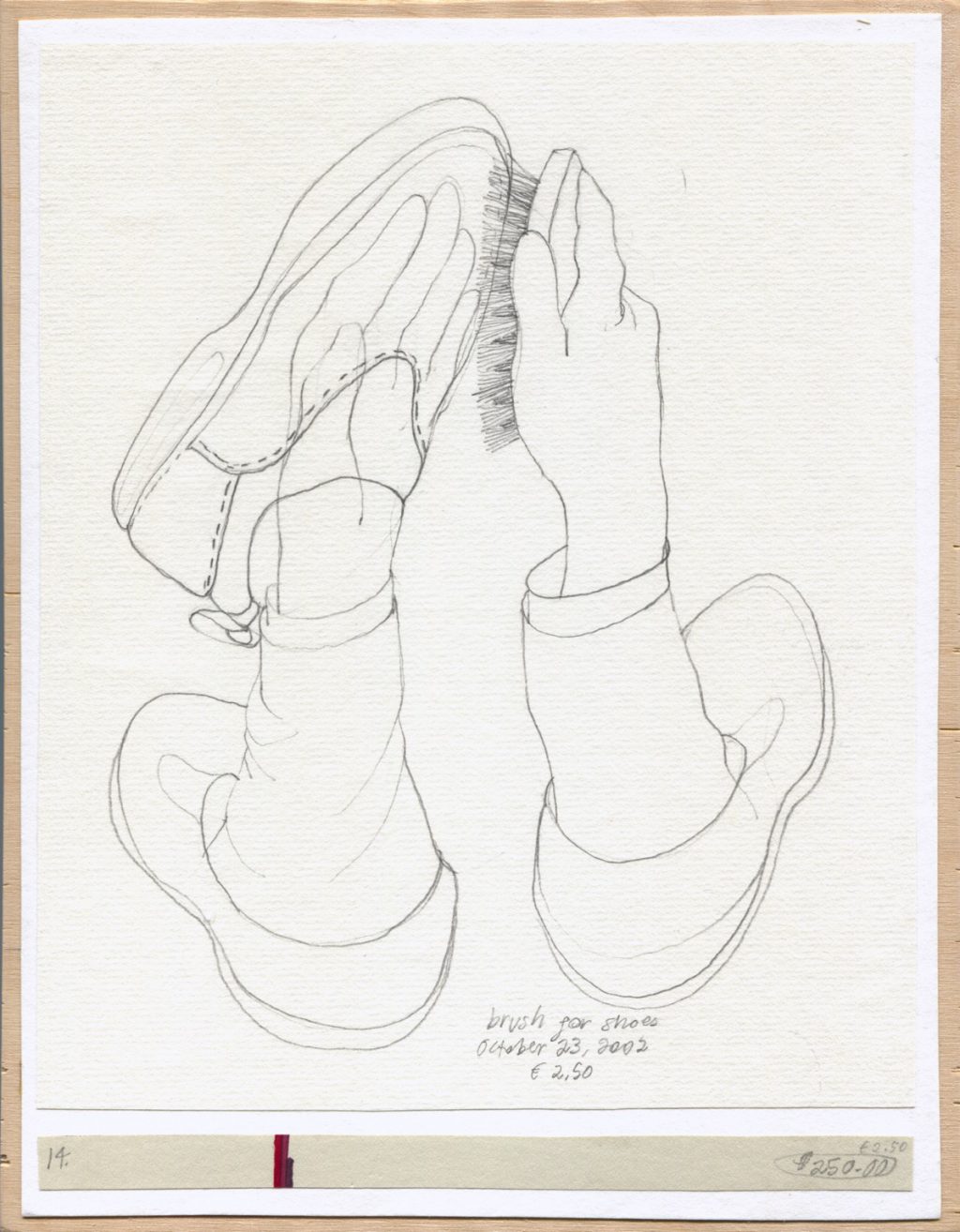 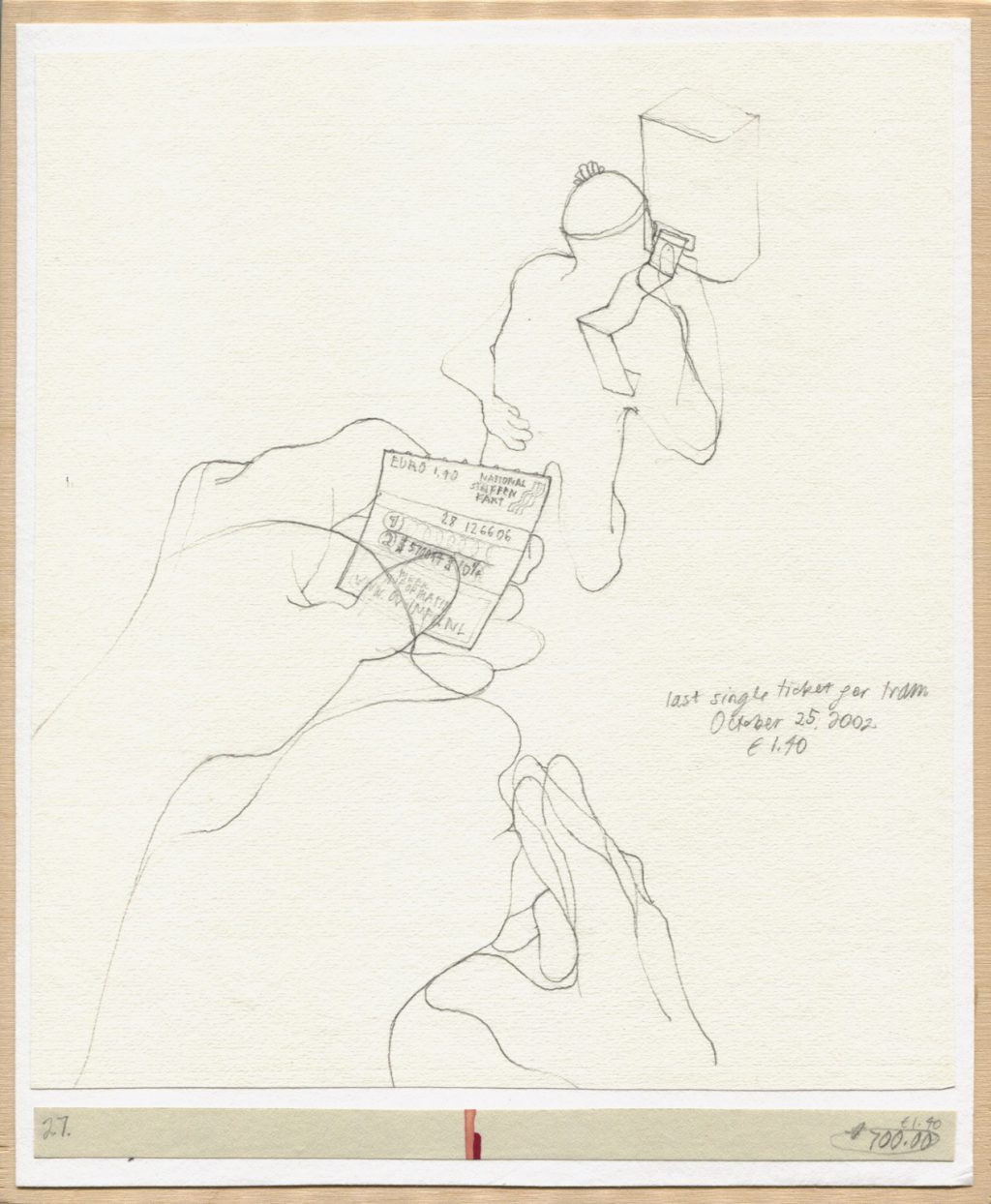 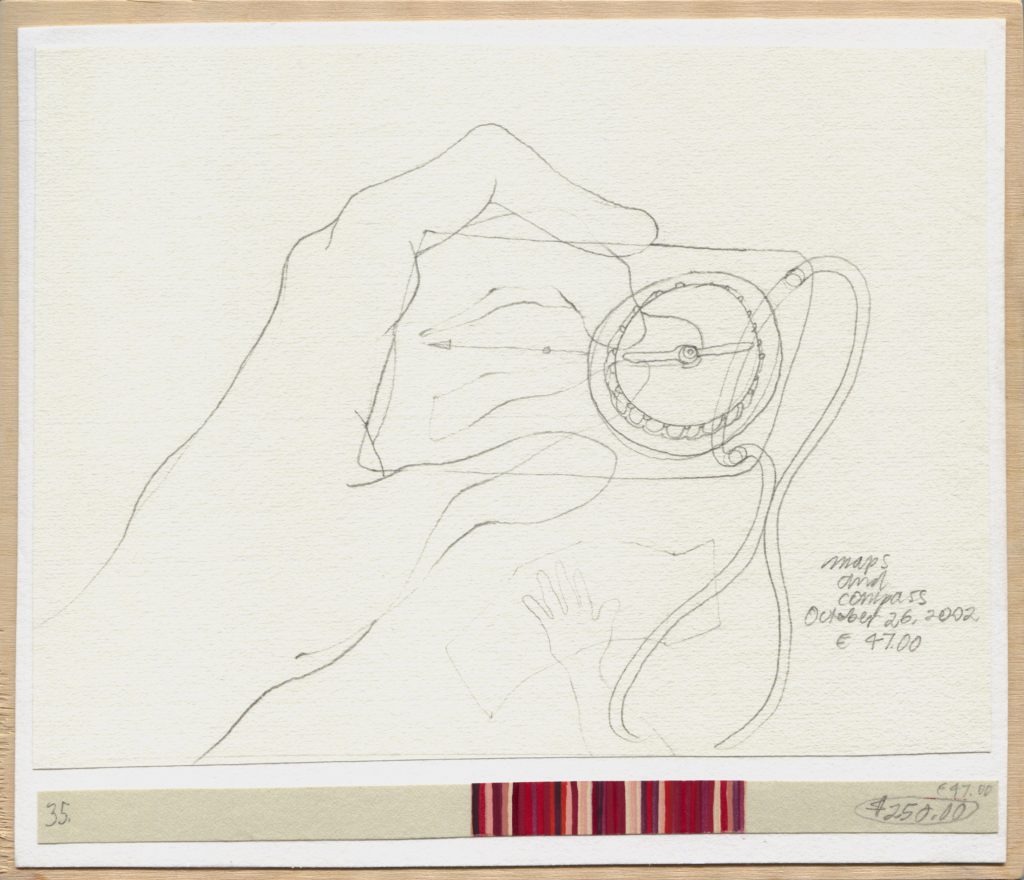 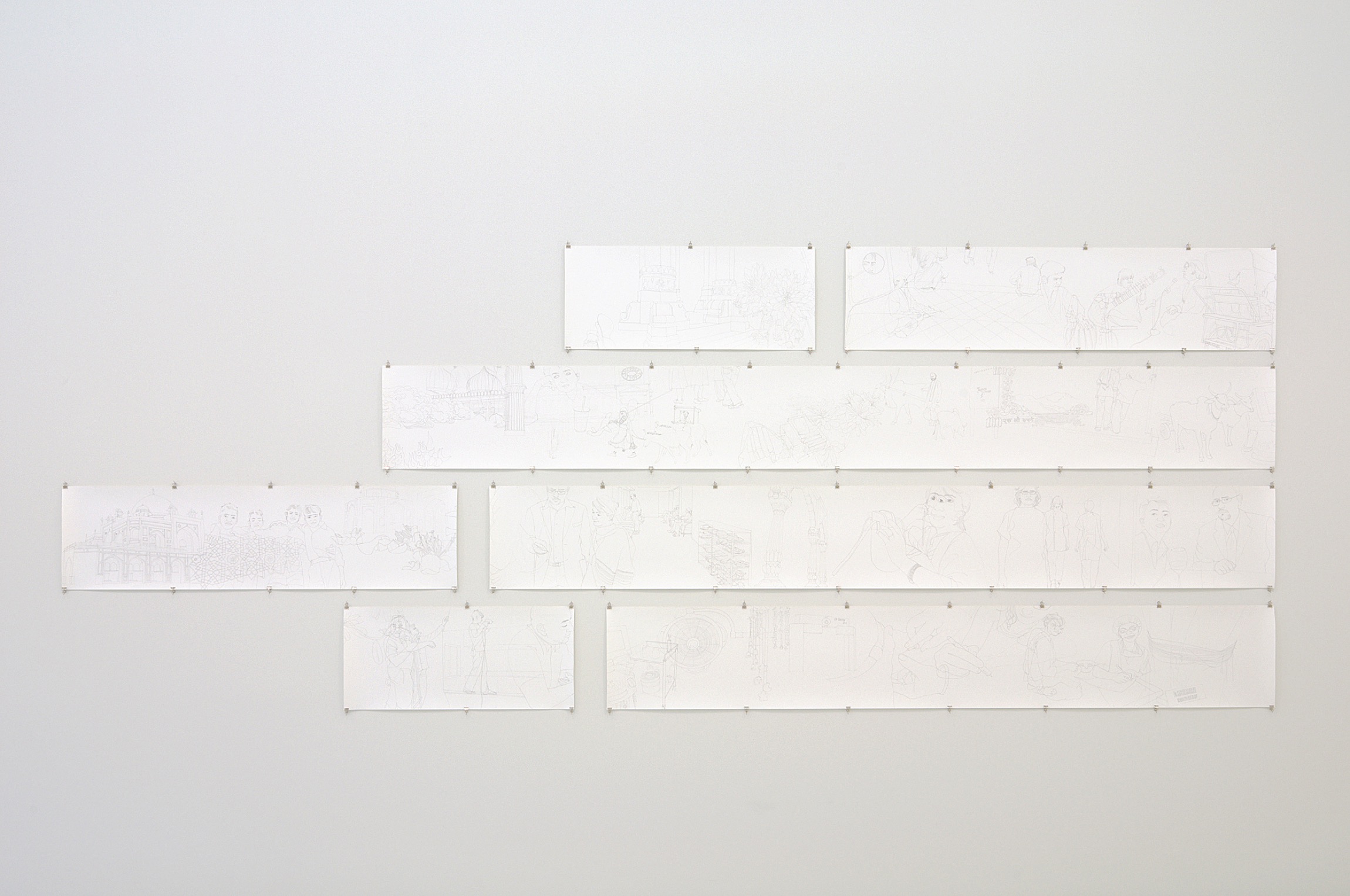 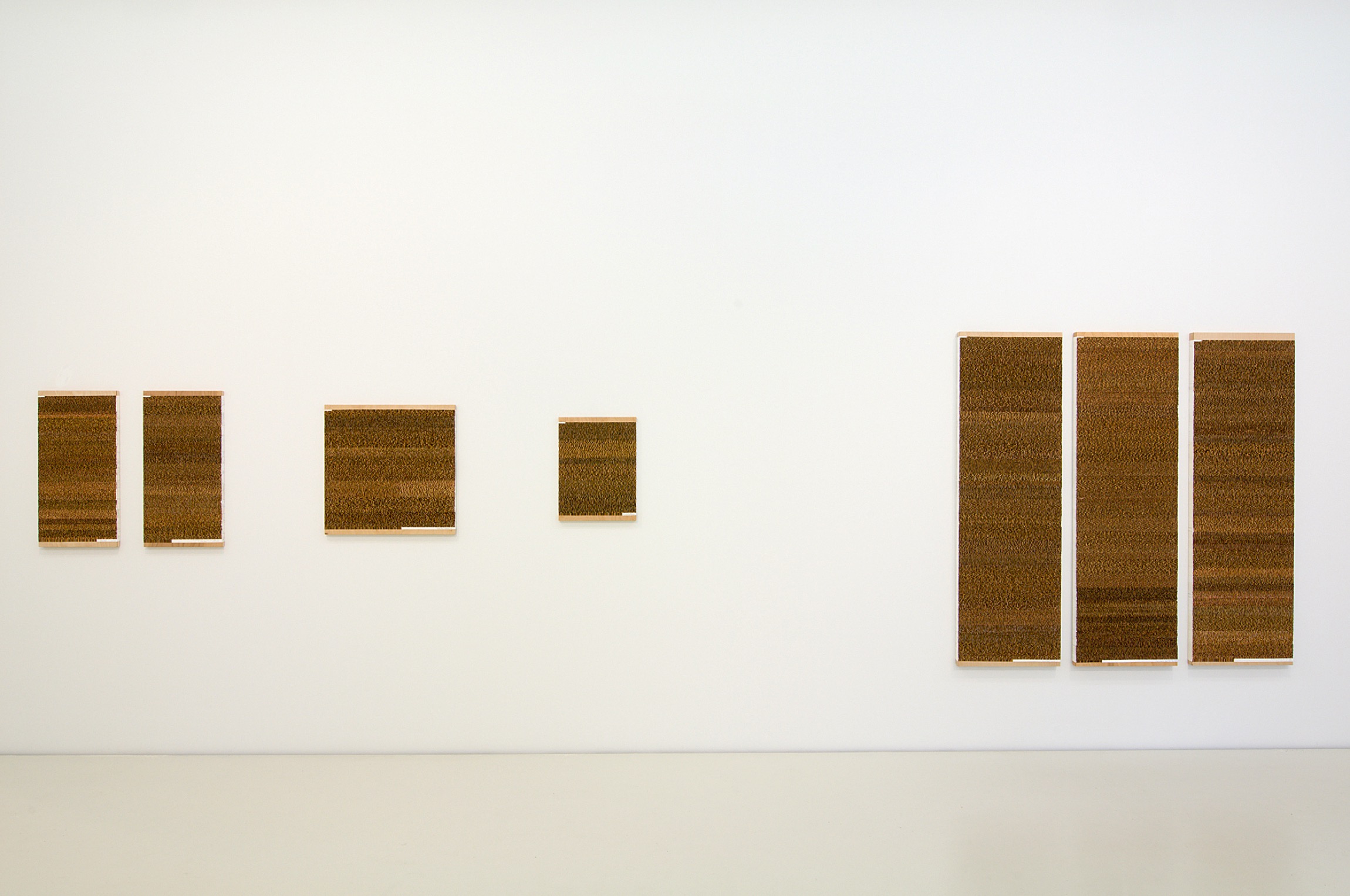 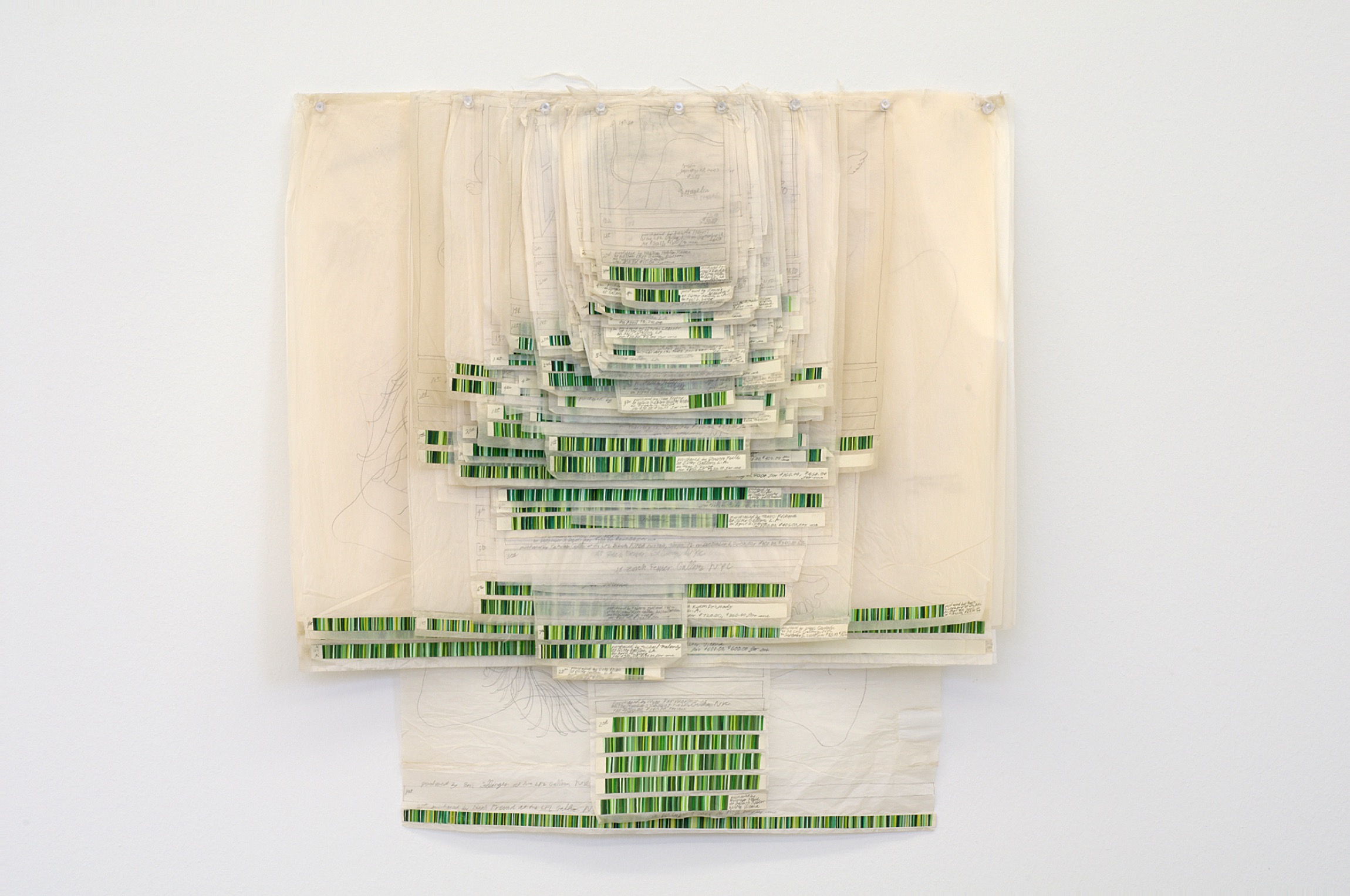 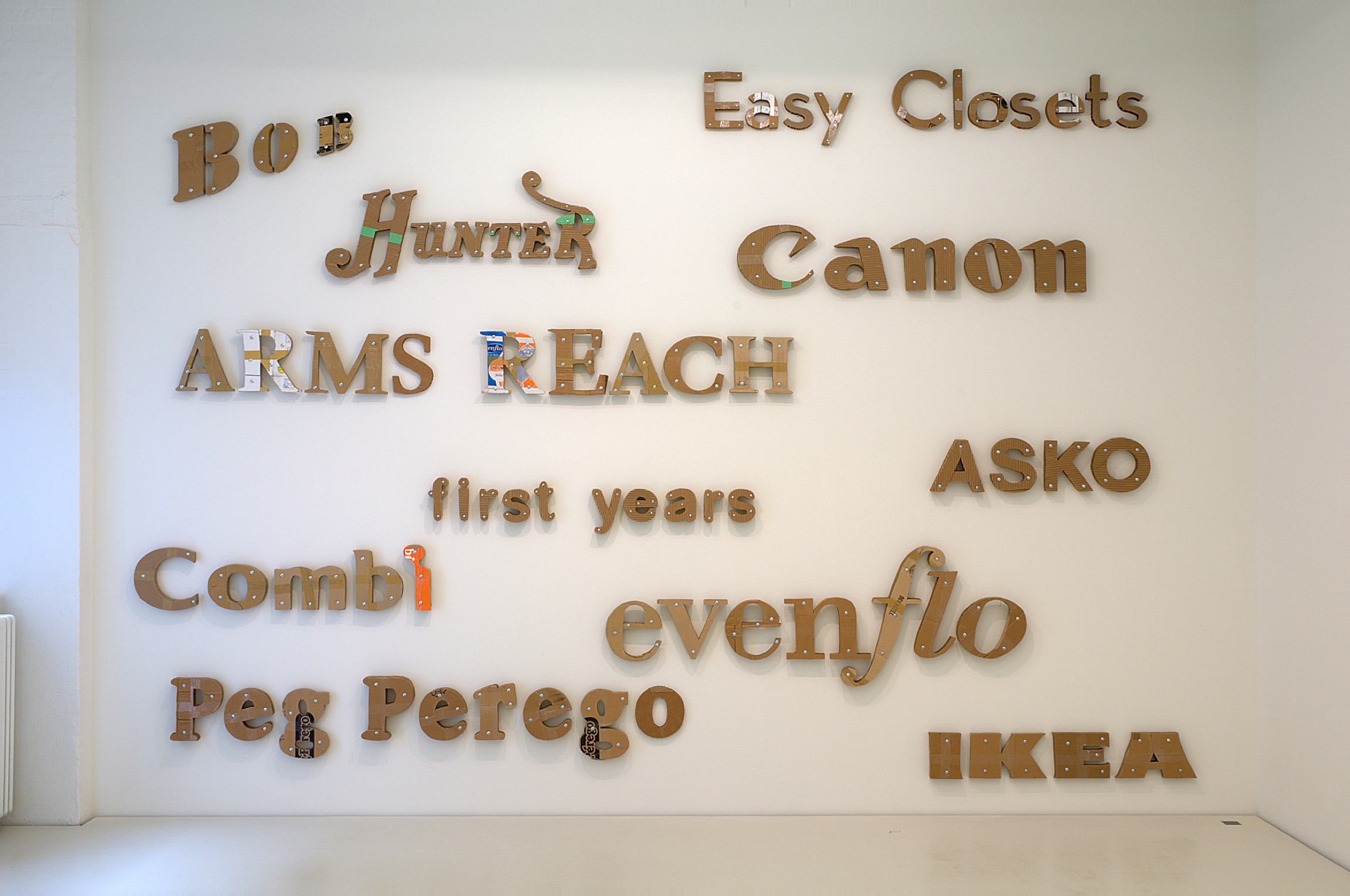 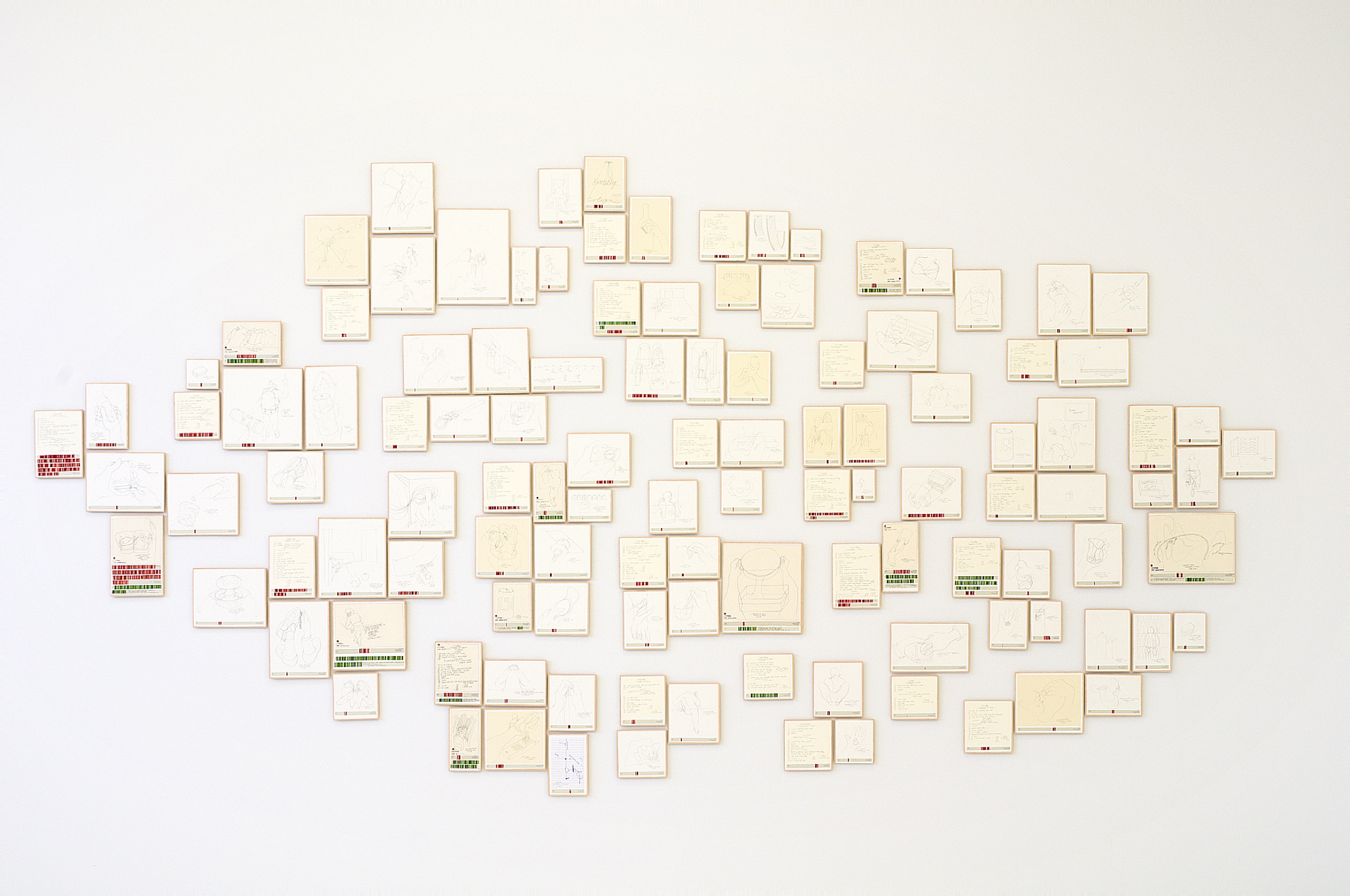 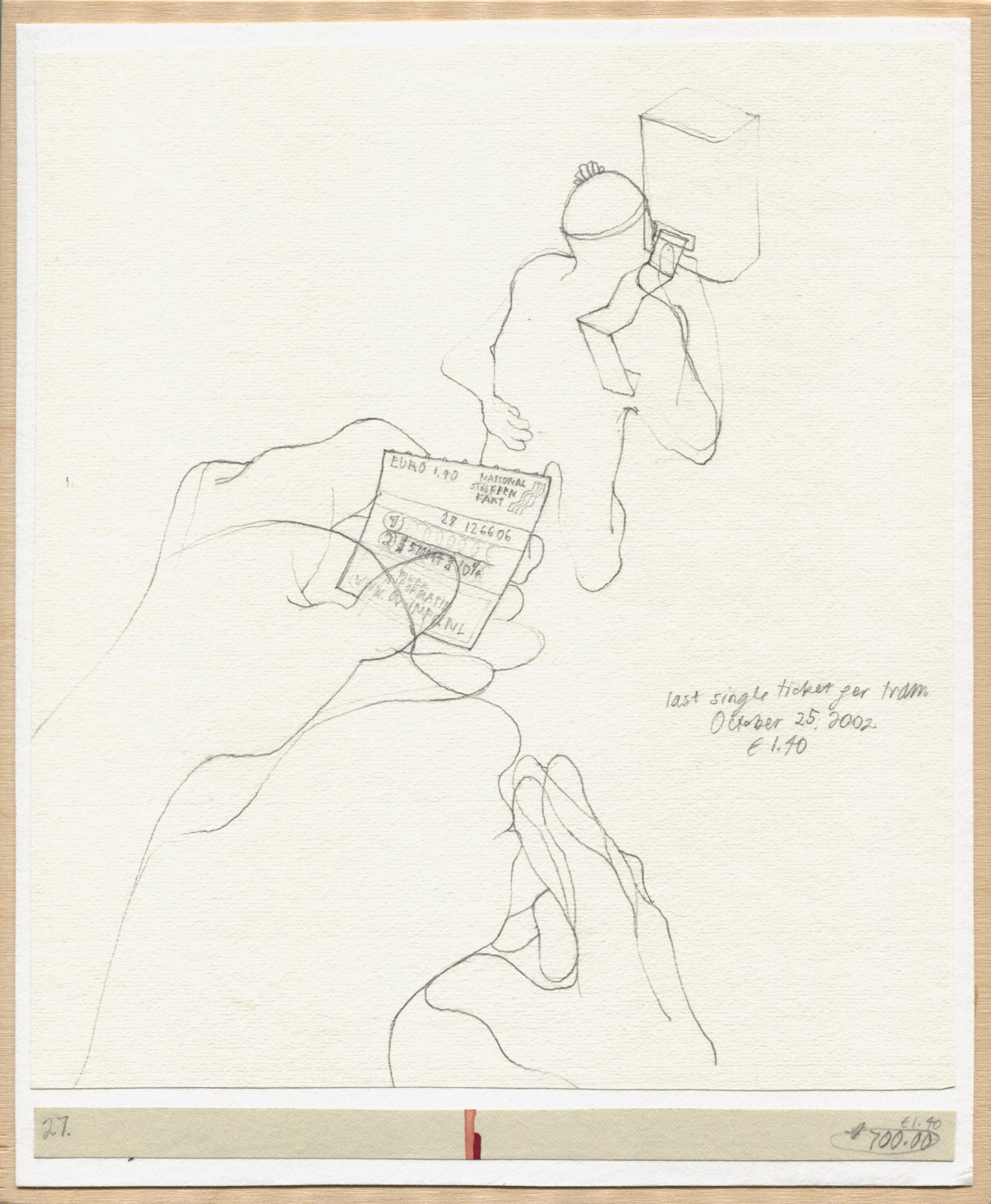 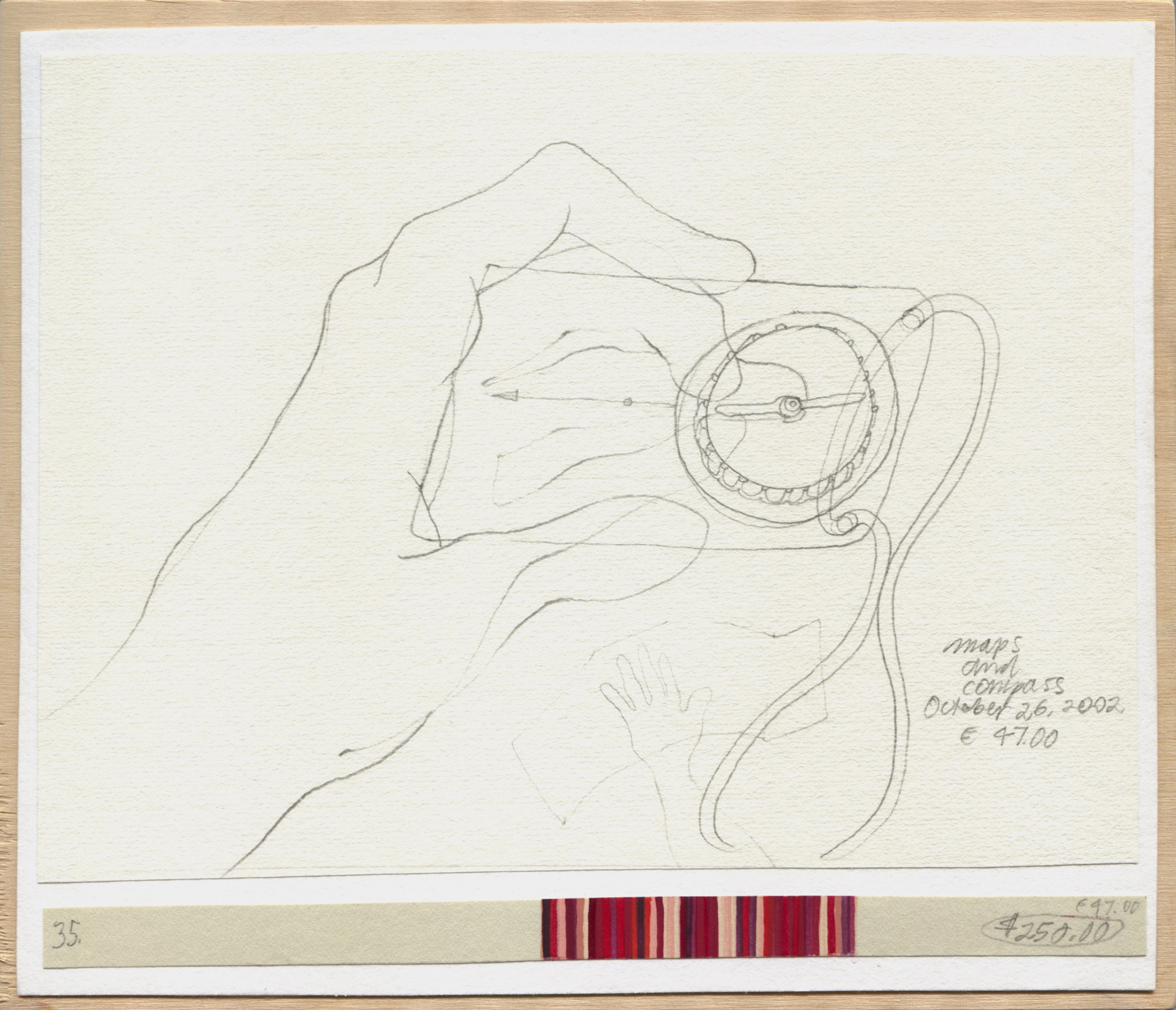 “Mark Down” is New York artist Danica Phelps’ (born 1971) first exhibition in Berlin, and presents several key works of the past years alongside newer works. Danica Phelps is first of all a draughtswoman, who uses this medium to keep a diary, and painstakingly document every aspect of her daily life as an artist. Executed in elegant pencil lines, she meticulously catalogues rituals both quotidian and intimate: waking up, walking the dog, grocery shopping, sex, arguments, making up. Phelps creates a unique blend of abstraction, conceptual systematics, figurative line and exhibitionism. She directly engages with issues such as the creation of value, or the structures of the art market, by laying bare her costs of living down to the last dollar – and by creating works that in turn deal with her own economic situation. In November 2008, Danica Phelps gave birth to her first child, Orion. “Mark Down” is her subtle and touching way of letting the viewer participate in the emotional and economic transformations of her daily life as an artist and a mother.

The earliest work in the exhibition is “Walking Amsterdam 9-5”, a sprawling installation of 116 small-sized drawings. Danica created this work in 2002 for the Amsterdam gallery Annet Gelink. She spent three weeks in the city, and 13 days walking through it, for exactly 8 hours every day. Point of departure for these excursions was always the central station, and every one of them proceeded in as straight a line as possible in all directions, 20 degree off the direction taken the previous day. At 5pm she would look for the nearest means of public transport in order to return to the city centre. One of her 8-hour hikes took her to a suburb of Utrecht, another all the way to Zanfort. The individual drawings on this wall are clustered by days. One lists all the day’s activities, the others represent situations and objects on which Phelps spent money. Every red stripe stands for a Dollar spent, and green stripe for a Dollar earned. The price of each drawing (from 30 to 800 Euros) depends on how much the artist likes the drawing. As she believes that the determination of the price is the final aesthetic decision, the price becomes part of the work itself – and is noted, in US$, on the drawing itself. If a certain drawing finds a buyer, Phelps creates a copy of it on tracing paper, which then replaces the sold drawing in the series. On this ‘second-generation’ drawing she paints a number of green stripes that corresponds to the price fetched by the original, the name of the collector, the gallery and the date of the sale. This in turn renders the copy unique again – and means that it is itself now up for sale. The presentation at Nolan Judin Berlin is the first chance since their exhibition in Amsterdam in 2002 to buy these drawings.

The drawings in “Integrating Sex into Everyday Life” (2003 – 2006) were created after Danica Phelps’ lesbian coming-out. Prior to that, she had been married to a man for six years. Although during those years she had meticulously logged the details of her daily life – down to every quarter of an hour – there is no mention of sex in these artistic protocols, because there was none in her life. After her coming-out, her newly discovered sex life had to become part of her work, and she decided to record it in her drawings. For Phelps, who draws as though she can see through bodies and things, and thus transform and fuse them, sex was a wonderful topic. Sex should be treated just like any other aspect of her daily life. Accordingly, her drawings of her shopping for vegetables are just as loving as those of a night of passion with her partner. This collection of drawings consists of the last traced copies of works that have been exhibited and offered for sale six times in the last two years. The most popular of these drawings is the 20th generation copy of the ‘original’ drawing.

The script-sculptures that form “Things for Orion” (2009) were created from the packaging of all those things that had to be bought after Orion’s birth. They depict the logos of the brands and are made of cardboard and steel bolts. In order to make these letters, Danica had to first create stencils in the respective fonts. In “Making Paper (Whole Sheets)”, all the paper cuttings from these stencils – even the tiniest snippet – have been put together in a new paper.

The most ambitious installation in the exhibition are the seven panels of Failed Stripe Factory (2007-2009). Her purchase of a small four-family house in Brooklyn overwhelmed Danica Phelps’ “bookkeeping” by way of red and green stripes. She took out a loan of 627,000 US$, requiring a corresponding number of grey stripes (grey, because credit constitutes a grey zone between income and expenditure). The artist had to hire assistants – and at one point there were fifteen people simultaneously painting stripes. The particular way in which each assistant painted her stripes created nuances and structure. The paintings that resulted from this were everything but “monochrome”. Phelps was fascinated by this aspect, and decided to detach the process from her personal finances and to offer stripe paintings ‘on demand’. The project was now called “The Stripe Factory” and employed six people. A collector could commission a painting of any number of stripes, at the cost of 15 cents per stripe. Of this, five cents went as wage to the factory workers, five cents as commission to the gallery that brokered the deal, while the remaining five cents went to the artist. For the stripes, Phelps chose the colour brown – the mixture of red and green. First, seven samples were created, with 20,000 to 100,000 stripes. The project was a failure: collectors were not interested in paintings of stripes that had nothing to do with the financial life of the artist herself. After two years, Phelps decided to wind down the factory. As a result, the project is now called Failed Stripe Factory.

Danica Phelps’ relationship with her girlfriend Debi was very passionate – for good, as well as bad. Intense love-making alternated with rancorous arguments. In recording her daily life, sadness over the arguments became overwhelming, and so the artist decided to stop noting every detail after ten years. To celebrate that decade, she created the last chart-drawing as a silkscreen print. The letters that form the work “It made me too sad to write down every fight we had” (2008)were created from scraps that had accumulated in the four months following her decision to stop creating these charts.

Danica Phelps is renown for her beautiful ‘scroll-drawings’. They can be over 20 metres long and are often drawn recollections of trips or events. IVF in India (2008) was created under the impression of a trip to India, which Danica went on in order to undergo in-vitro fertilisation (IVF). The artist and her partner Debi had decided to have a child together. After both women were examined, it was clear that Danica Phelps had better chances of getting pregnant. In India, the cost of an IVF is around one fifth of that in the US. Also, a cousin of Debi’s donated sperm. The IVF was successful immediately, and in November 2008 a healthy boy by the name of Orion was born. “Orion’s First Months” (2009), the most recent scroll-drawing, describes the arrival of Orion in Danica’s life. The artist has come up with an unusual sales strategy for these scrolls: collectors can themselves select and buy a section of any length, but measuring at least 20cm.

A set of individual drawings is entitled “Orion’s Hands” (2009) and depict the baby’s hands during breastfeeding – in each case over the course of several days.

The last two works in the exhibition are stop motion animations on flat screen monitors. When it was clear that she was pregnant, Danica Phelps took a photo of herself every day at the same point in her flat, which underwent significant restructuring in expectation of the approaching addition to the family. The last photos were taken in the thirty days after her return from the hospital. Only 15 seconds long, Pregnancy (2008), was made up of approximately 300 individual photos now shown in fast motion. Executed in the same technique, “Orion growing” (2009) shows the artist with the little boy from age two to six months – a nice addition to the centuries-old Mother-and-Child iconography. Unlike his mother in Pregnancy, Orion did not stand still for his daily photo.