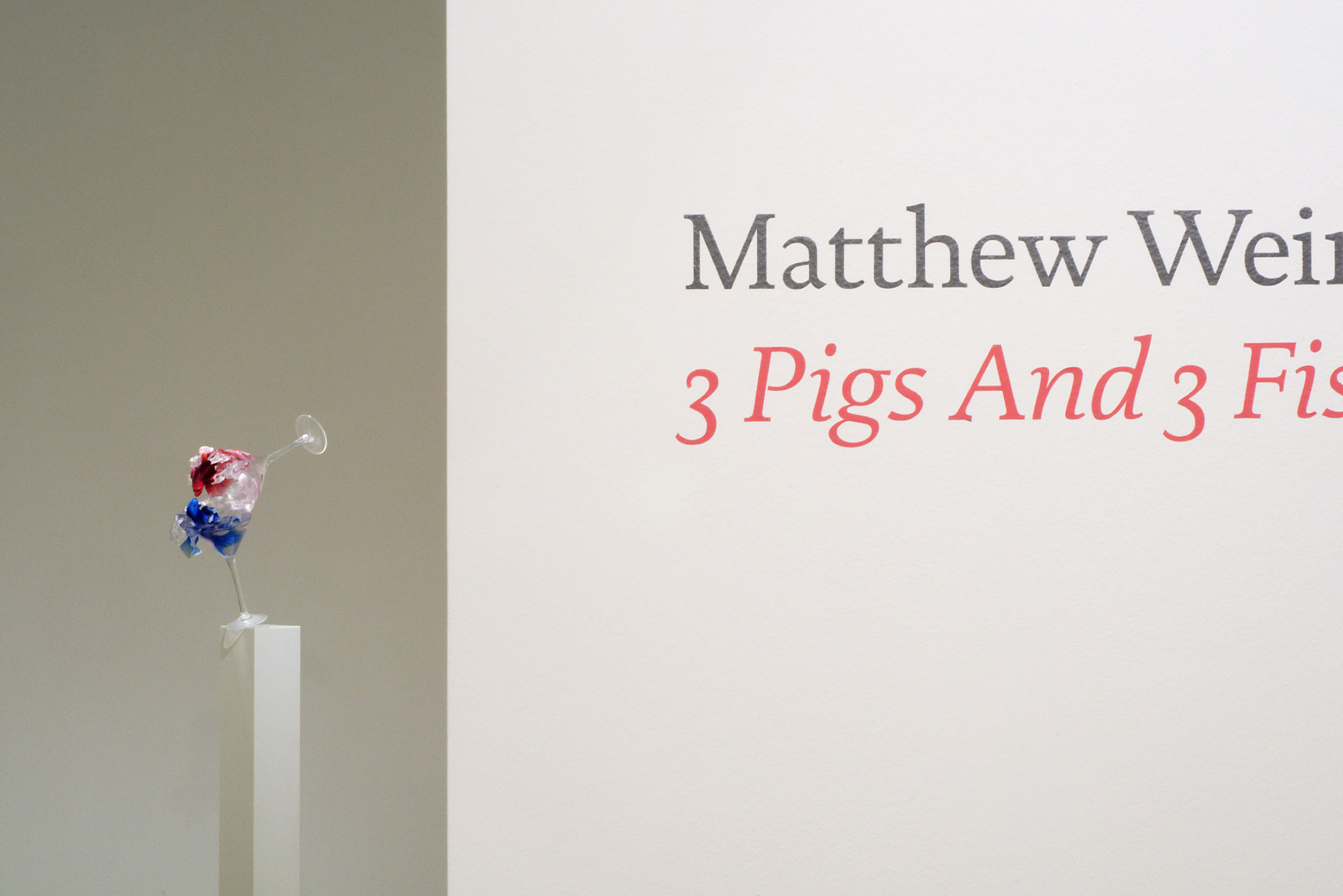 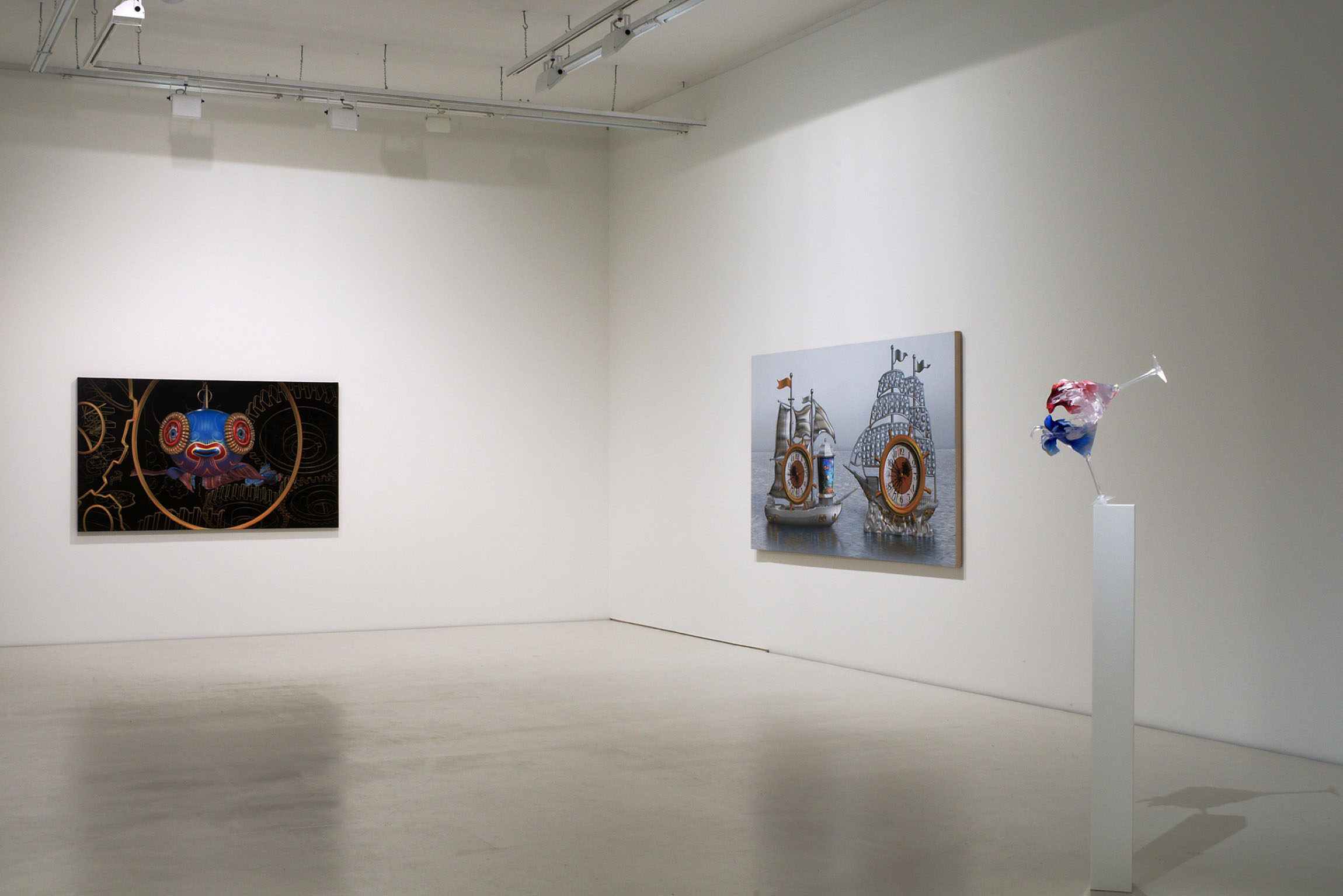 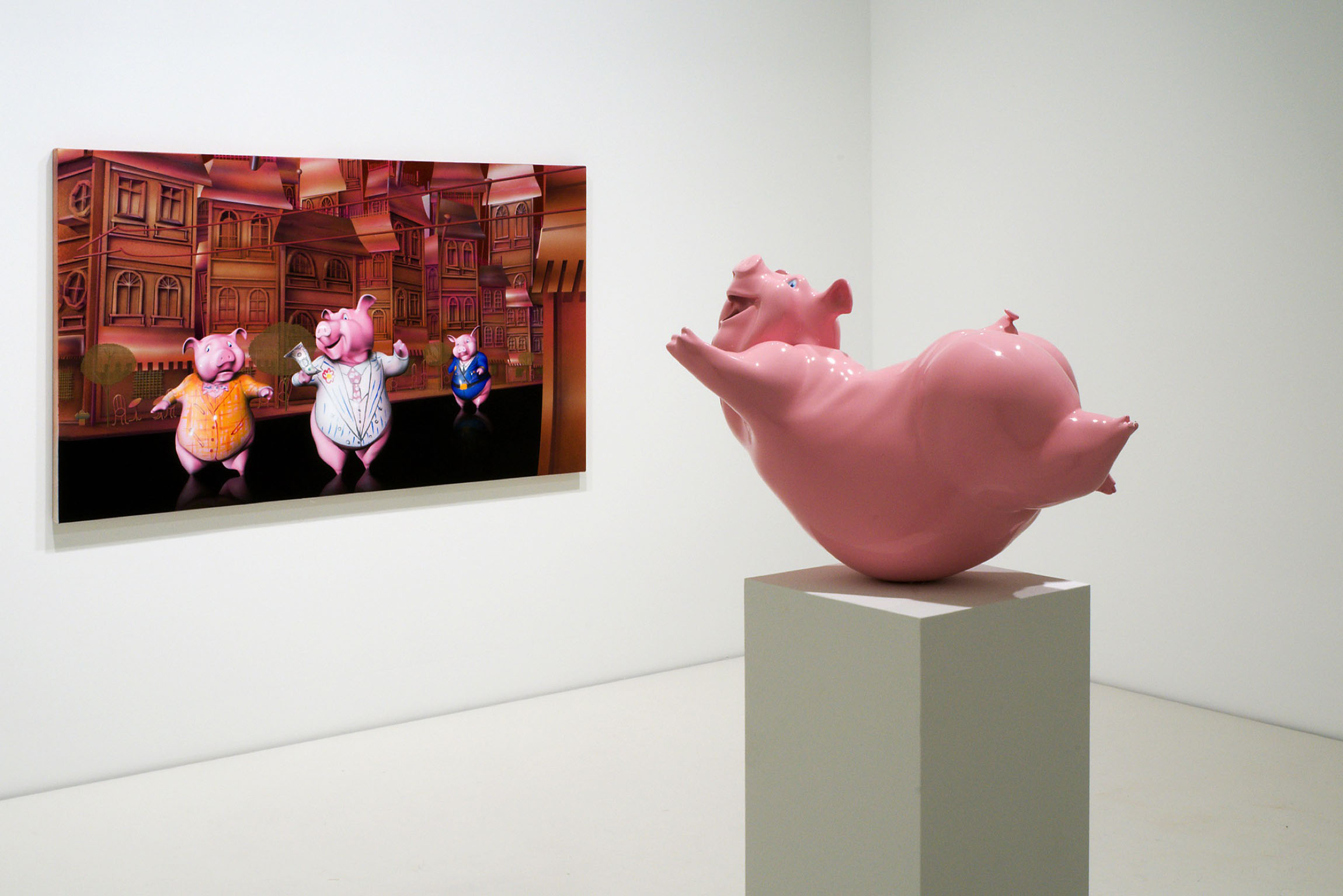 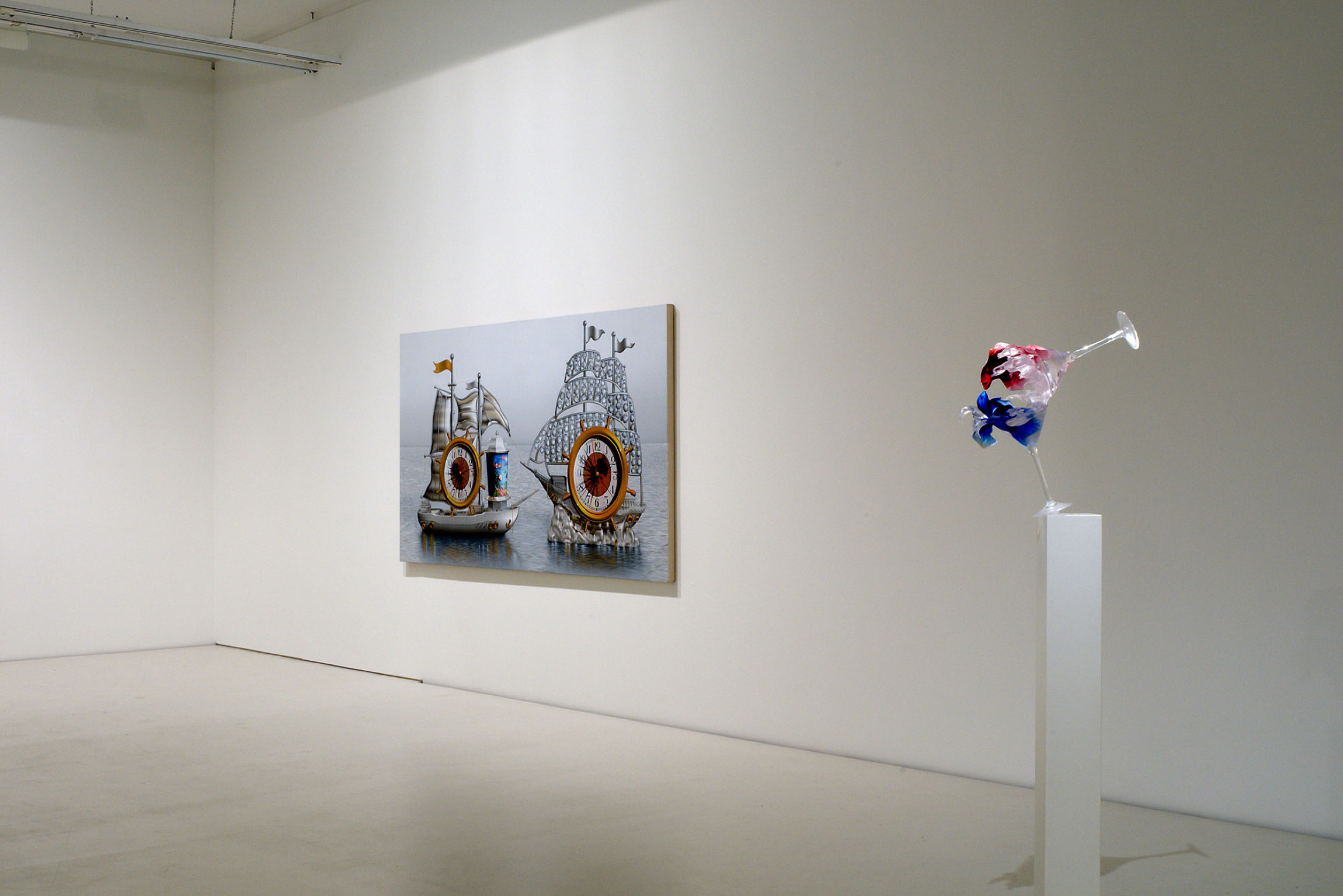 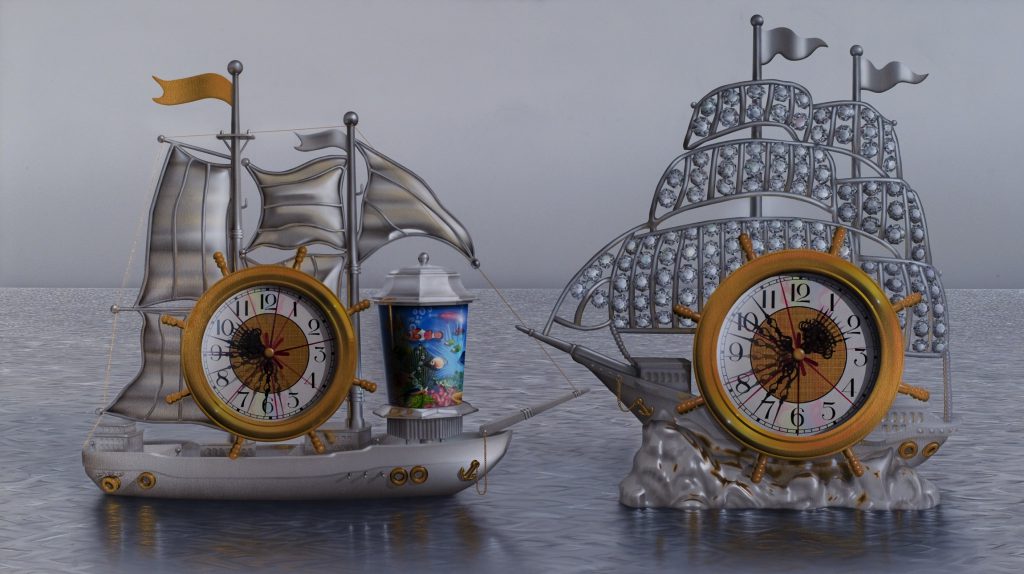 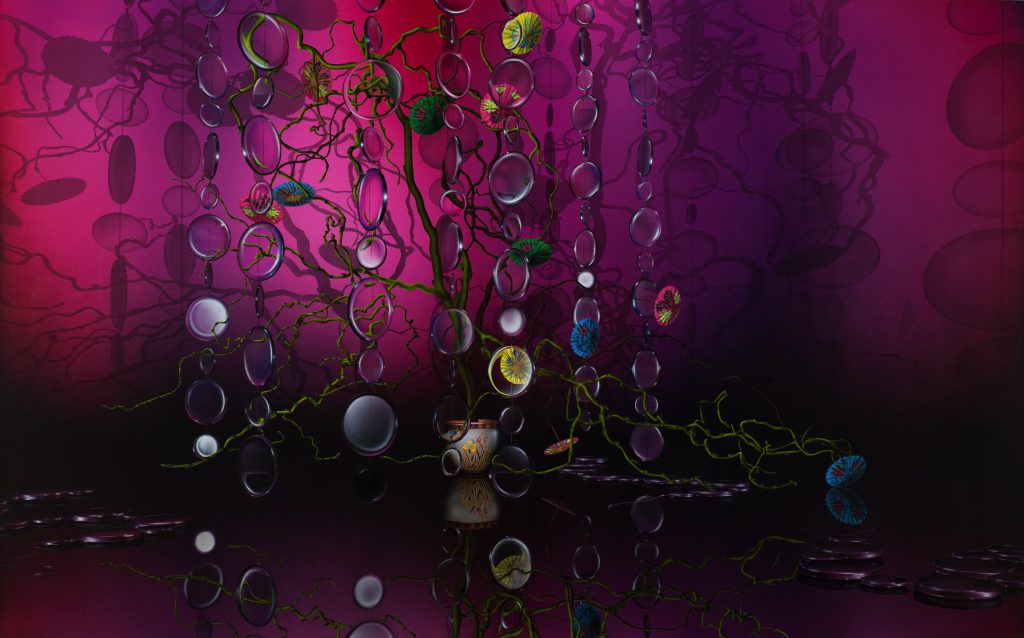 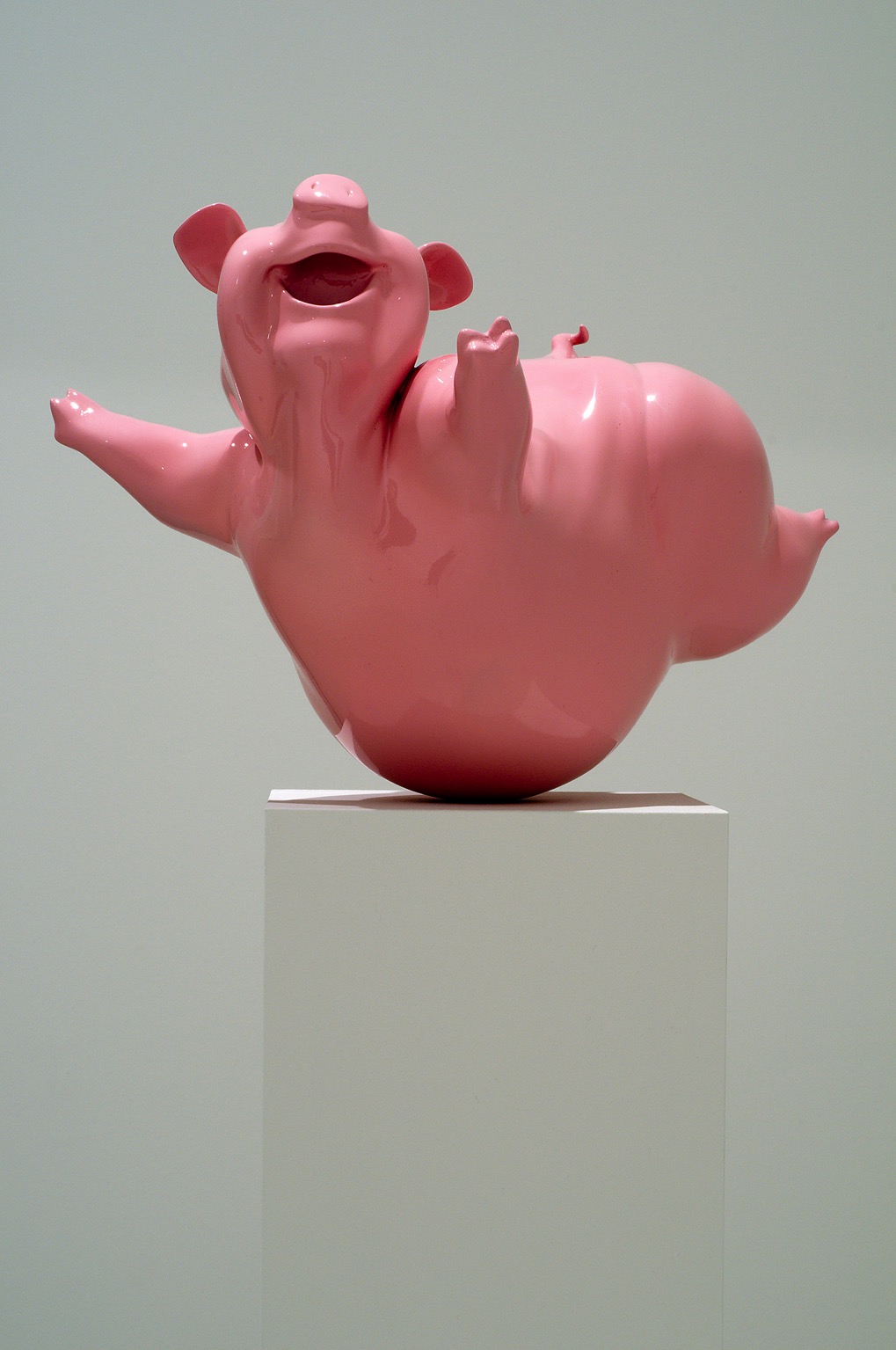 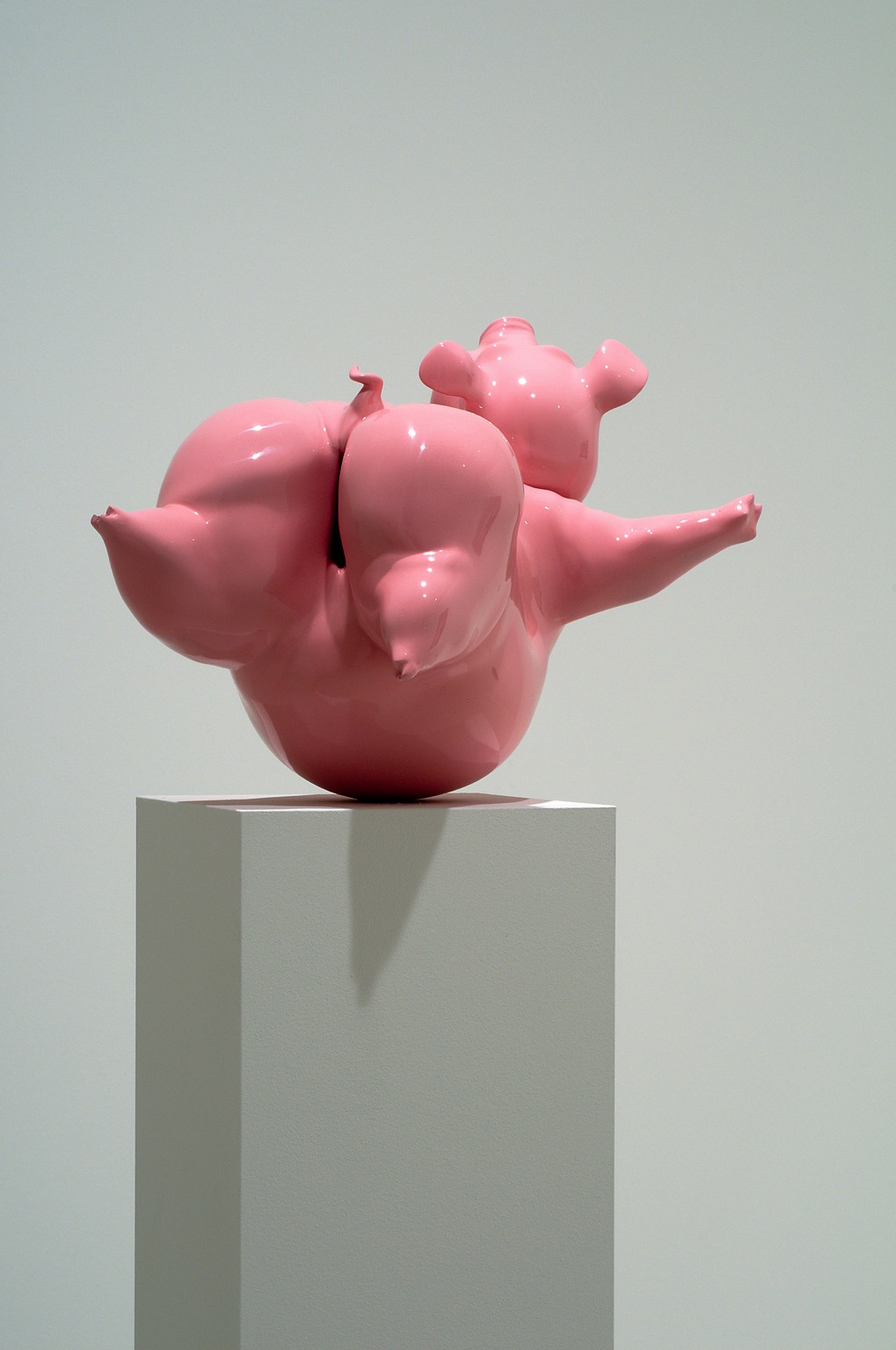 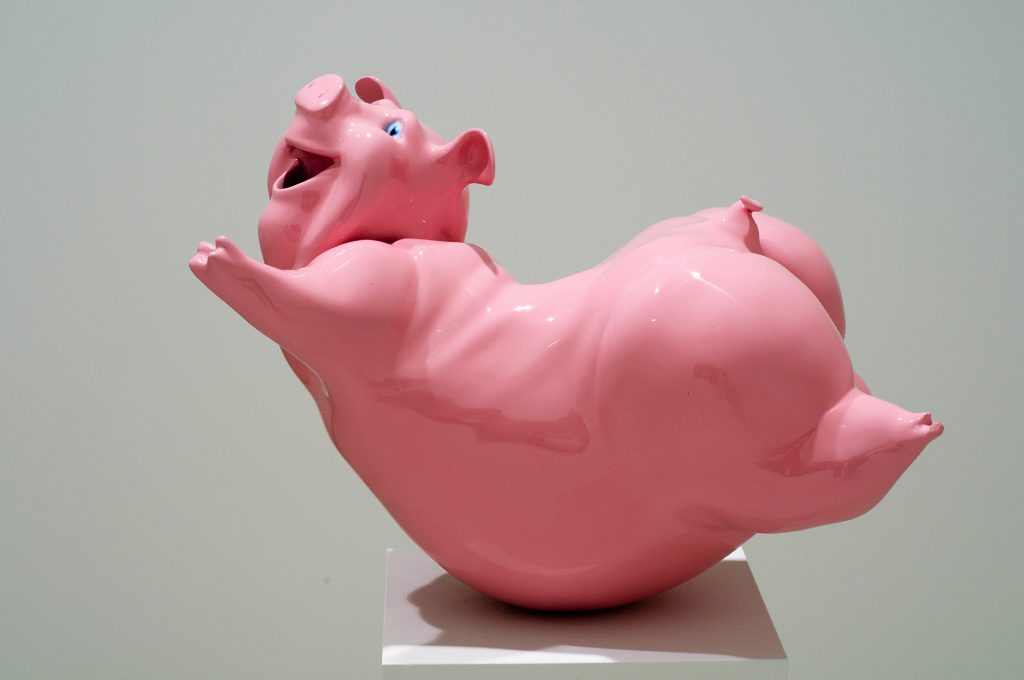 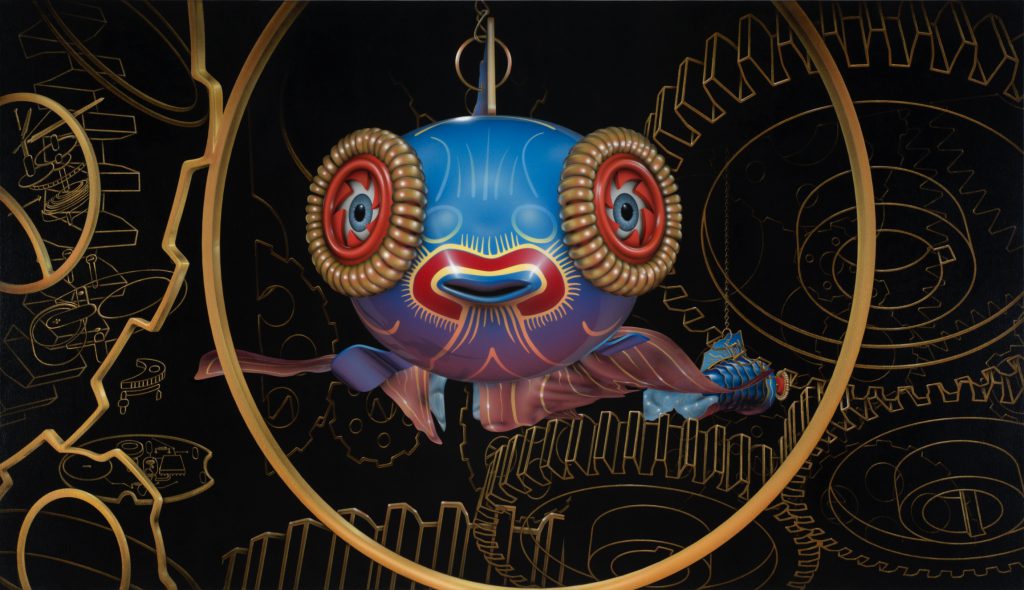 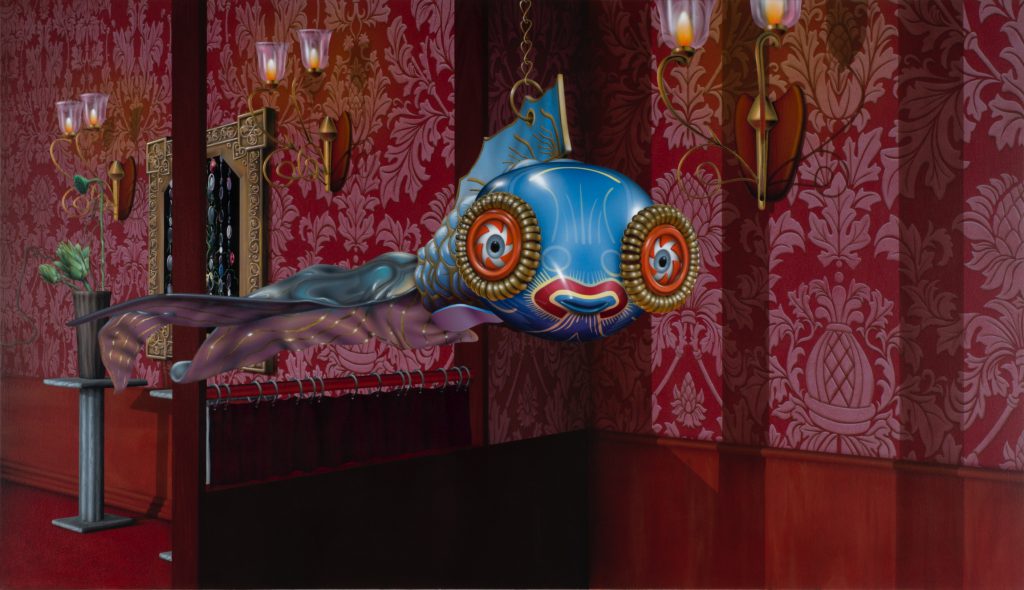 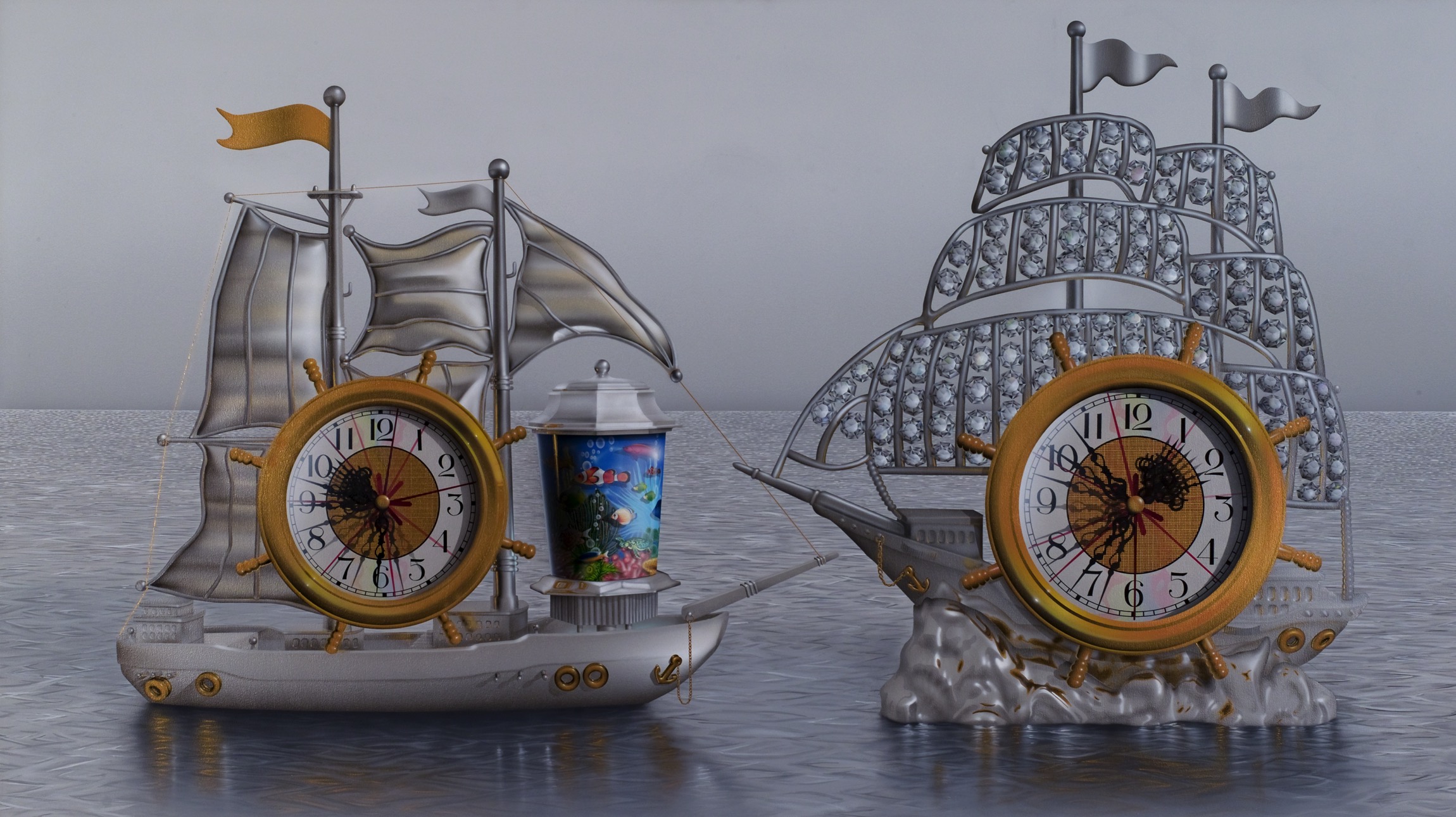 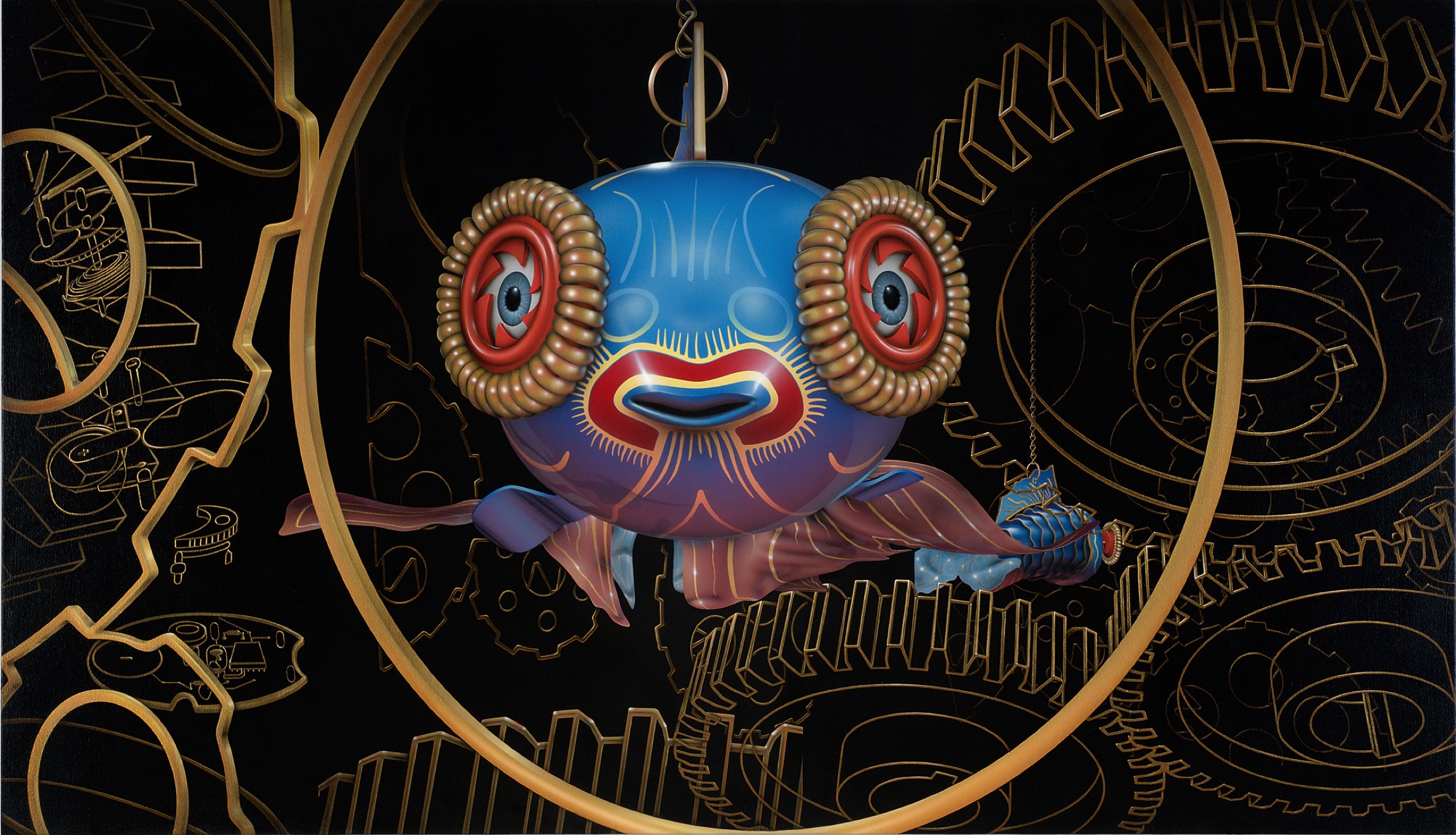 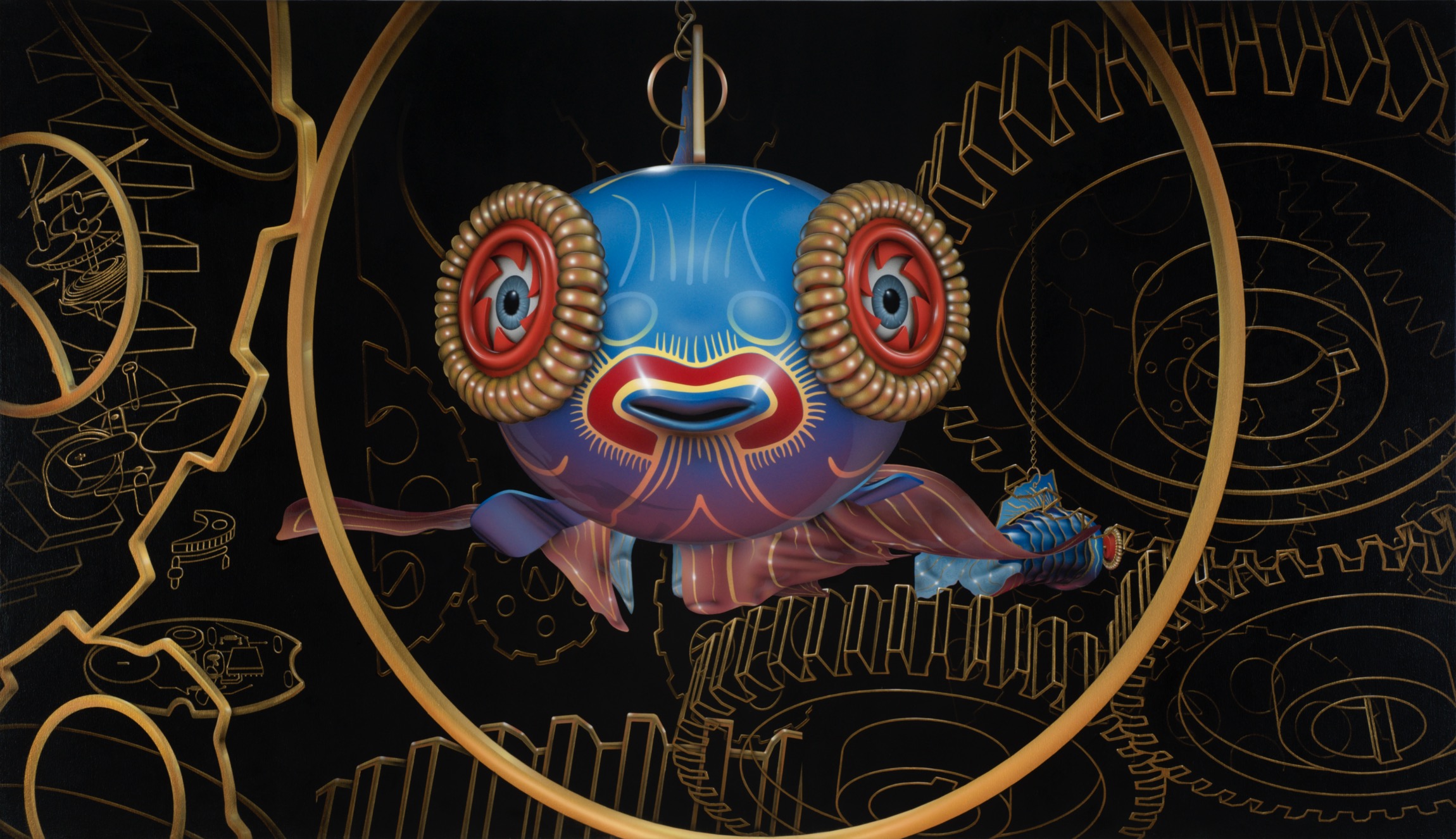 Nolan Judin Berlin is pleased to present New York artist Matthew Weinstein’s work in Berlin – his second exhibition in Germany after a one-man museum show in 2004 at the Pinakothek der Moderne in Munich.

A highlight of Matthew Weinstein: 3 Pigs And 3 Fish is the European premiere of his new film, “Chariots of the Gods”. Further developing his unique format of 3-D animated cabaret, Weinstein‘s longest and most ambitious animation project to date is once again a monologue by a female character (in this case spoken by Tony-Award winning actress Natasha Richardson). The protagonist is an articulated metal fish hanging from a golden chain inside an empty restaurant. She discourses on aliens, the impossibility of progress, climate and other weighty topics. She bubbles along in her monologue, moving from one room of the restaurant to another, delivering bombshells with a smile. The radical change in this piece is the fully articulated virtual set. It is a reconstruction of Ernie’s Restaurant from Hitchcock‘s “Vertigo”. Hitchcock himself had Ernie’s, a local San Francisco restaurant, reconstructed as a set for his film. Weinstein‘s computer generated version of the restaurant is the virtual reconstruction of Hitchcock’s reconstruction.

Weinstein‘s main influence in all his animations is the “Epic Theater”, of Bertolt Brecht. By employing presentational theatrical devices and performances, narrative interruptions, and songs, Brecht created theater that was supposed to be discussed and unraveled. He created issue-oriented productions with a strong entertainment factor. The Cabaret, which is the expression of the highly personal as the political, is also in a direct relationship to Weinstein’s animations.

Weinstein‘s process remains consistent. A script is written. Then characters are developed, conceptualized and created in a 3-D animation and rendering program. Actors are chosen to read the dialogue. A musician or a band is chosen to put Weinstein’s song lyrics to music, and to create the musical and sound landscape for the piece. Then the piece is conceptualized, animated and rendered.

Like the previous animated cabarets, “Three Love Songs From The Bottom Of The Ocean” and “Siam”, music is essential to “Chariots of the Gods”. For “Siam”, Weinstein had the Israeli band Balkan Beat Box put his lyrics to music. For his latest production, Weinstein worked with local DJ and electronic music composer Adultnapper. As in “Three Love Songs”, the style of the music is reflective but in no way illustrative of the content.

Weinstein will also be exhibiting six new paintings. Weinstein‘s paintings spring out of the digital environments he creates for his animated cabarets. Using precision airbrush technique and single hair paintbrushes, Weinstein creates paintings that evoke his invented world. In Weinstein’s work, there is no fall off in technique between media. The paintings and sculptures are not a document of an animated film, but are artworks on their own terms. Created analytically, by examining the output from the computer in minute detail, Weinstein is able to analyze reflectivity and surface and translate these phenomena into paint. The paintings are, therefore, abstractions of reality based on an abstraction of reality, and mirror his interest in the general trend in Western culture towards blurring the boundaries between the real and the virtual, and entertainment and information. In the translation of binary data to the ancient act of painting, Weinstein has found a way to make paintings that are technical mobius strips. He has also found a way to make realist paintings that avoid being based on either photography or observation of the natural world.

In “Allegory”, a larcenous pig steals money from another pig while a pig policeman looks on. They stand in a coppery city, the color of shiny pennies. This painting comes out of Weinstein‘s upcoming animated cabaret, “The Childhood Of Bertolt Brecht”, which will premiere in New York later in the year. “Artichoke”, and “Big Cheesy Moon”, evoke the character and environment from the animated cabaret, “Chariots of The Gods”. “Tiny Bubbles”, and “Two Ships” depict the world created for the animated cabaret, “Siam”. “Green Branches”, is a depiction of an ikebana arrangement. The branches sprout paper cocktail umbrellas and glass medallions fall around it, reflecting and refracting the branches. This painting appears as itself, inside “Artichoke”. It is reproduced in miniature and set into the background of the painting. In front of this painting of a painting is a depiction of an ’actual’ ikebana arrangement, that comes from an earlier painting that Weinstein made in 2006.

Reflection is an important element of Weinstein’s work. Just as the animated cabarets often involve characters reflected by their own environments (metaphorically and literally), Weinstein often paints glass medallions, mirrors, bubbles and reflective floors. Reflection also occurs in the way the paintings and animated cabarets reference and reflect each other. Characters from one pop up in another as a depiction or as an active character. Shadows, another kind of reflection, loom in the backgrounds of these works, dark crisp shadows like shadows created by strongly motivated theatrical lighting, suggesting that these cabarets and tableaux are being played for an audience, and we are witnessing the performance of a performance as reflected in the gaze of a mirror.