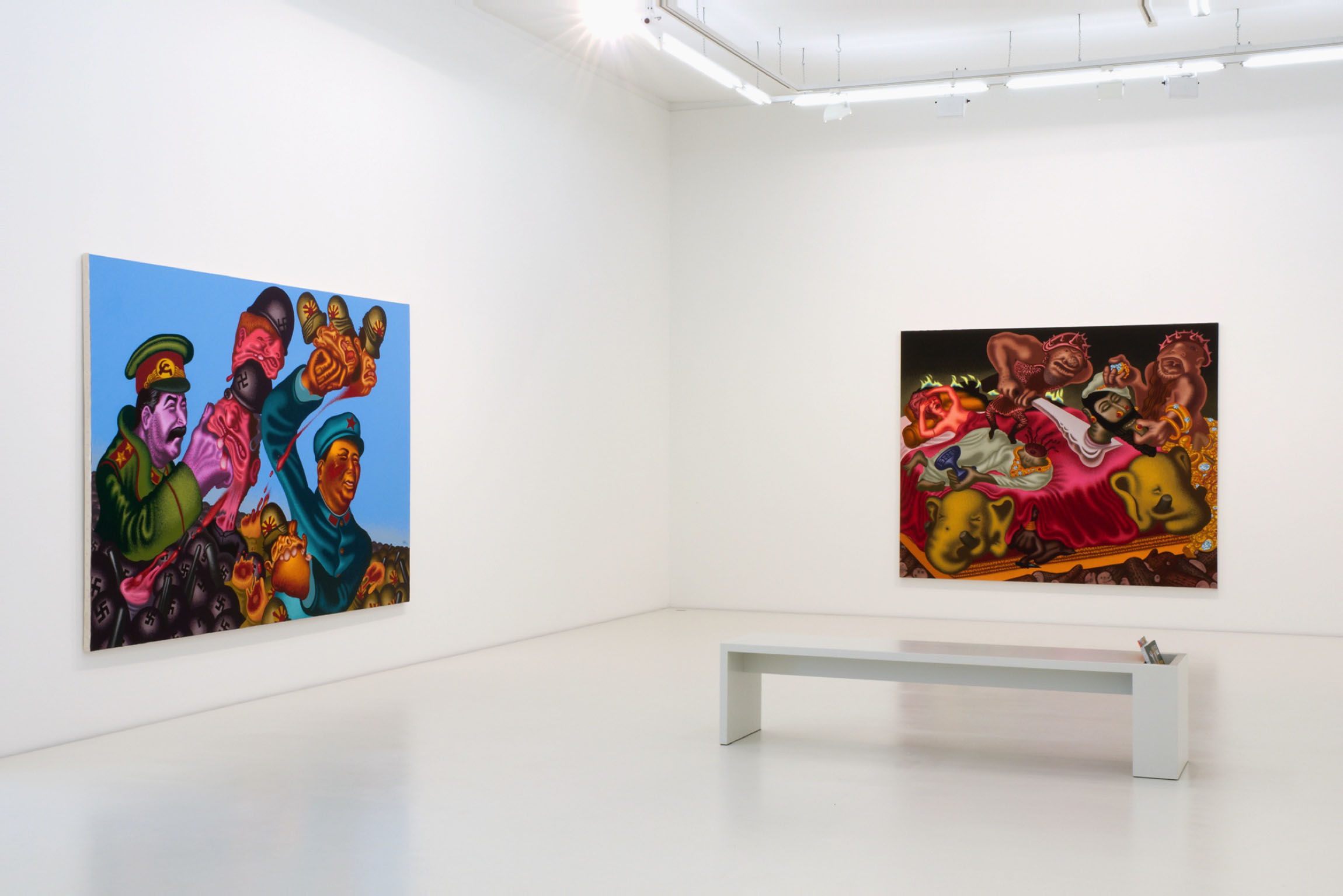 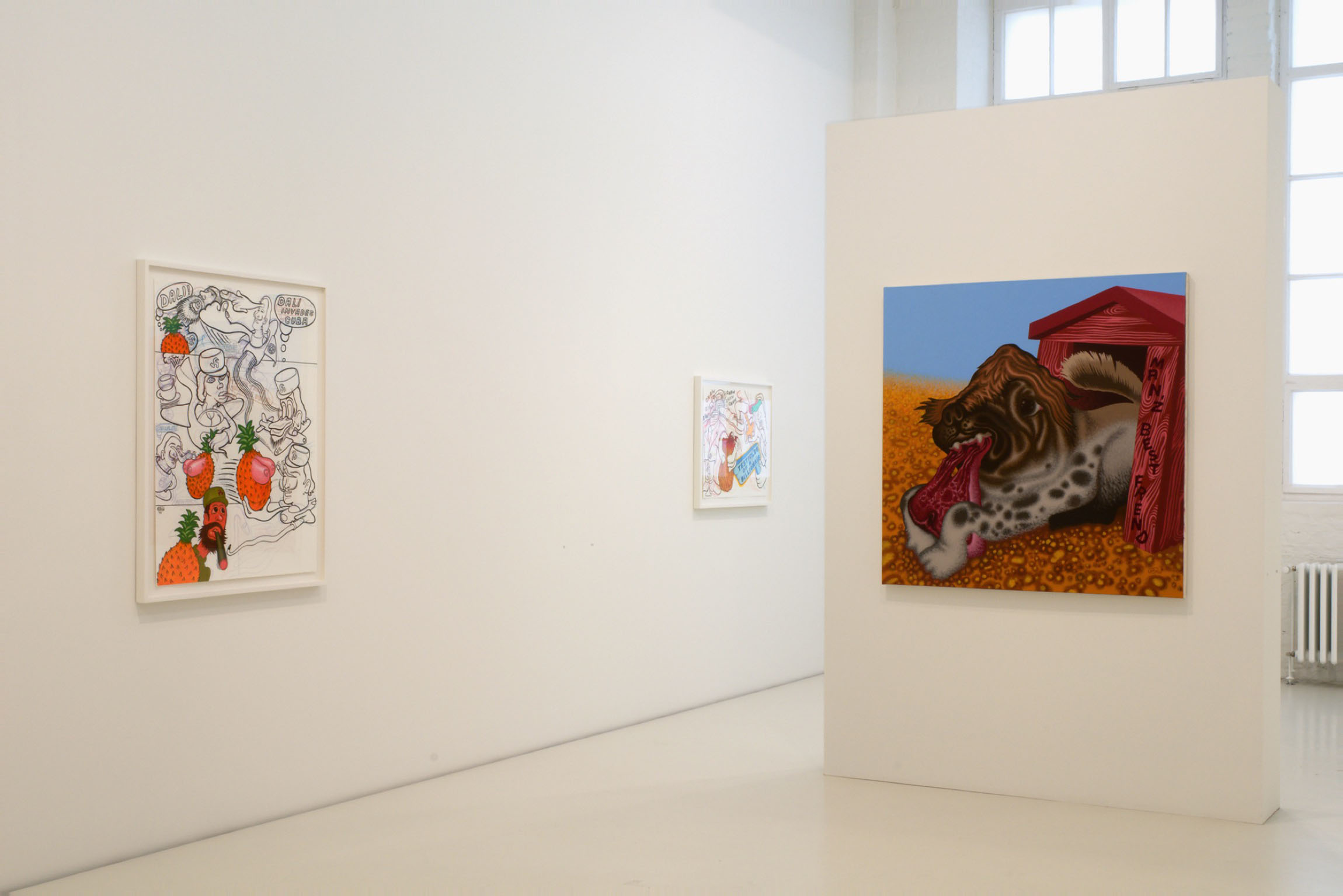 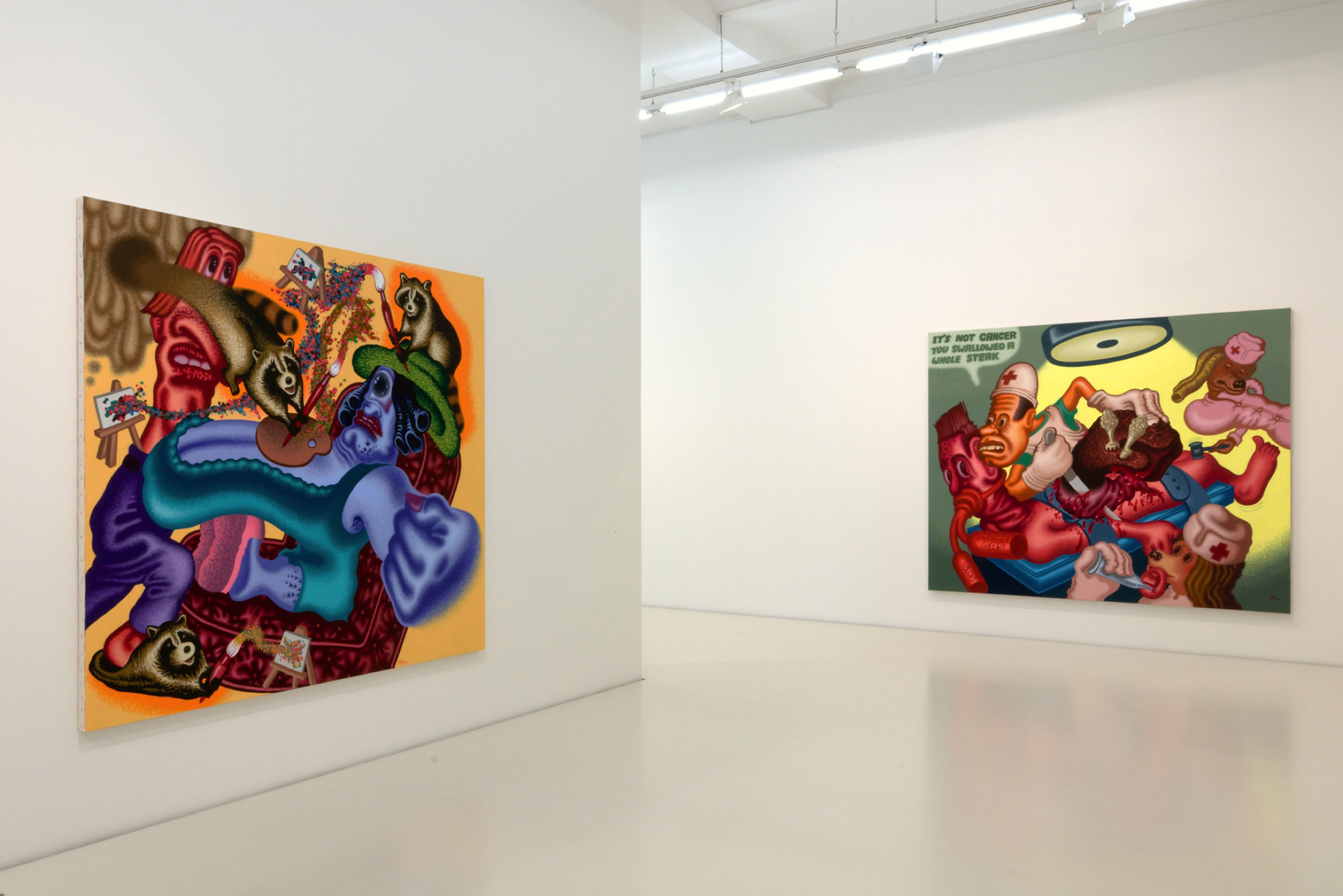 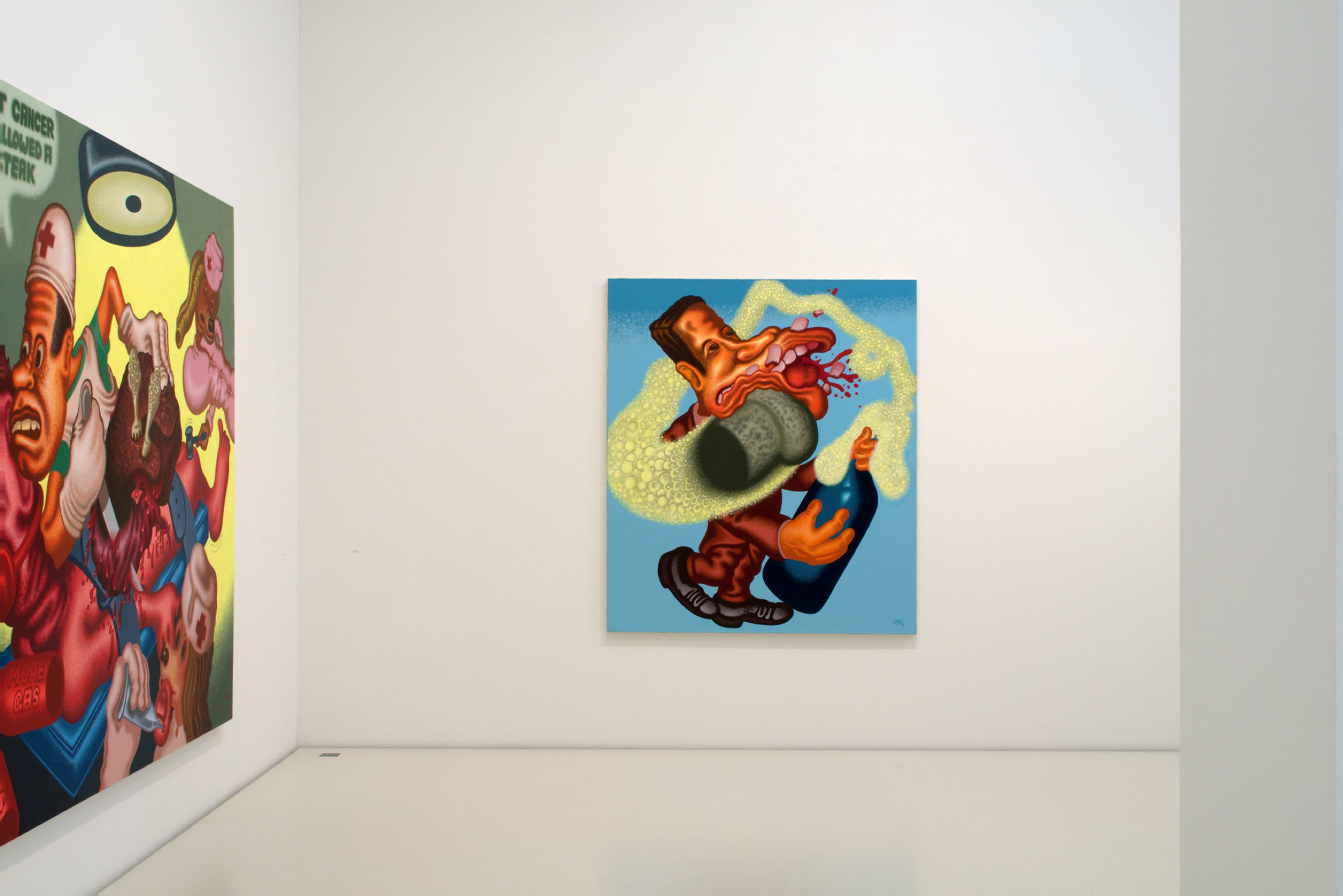 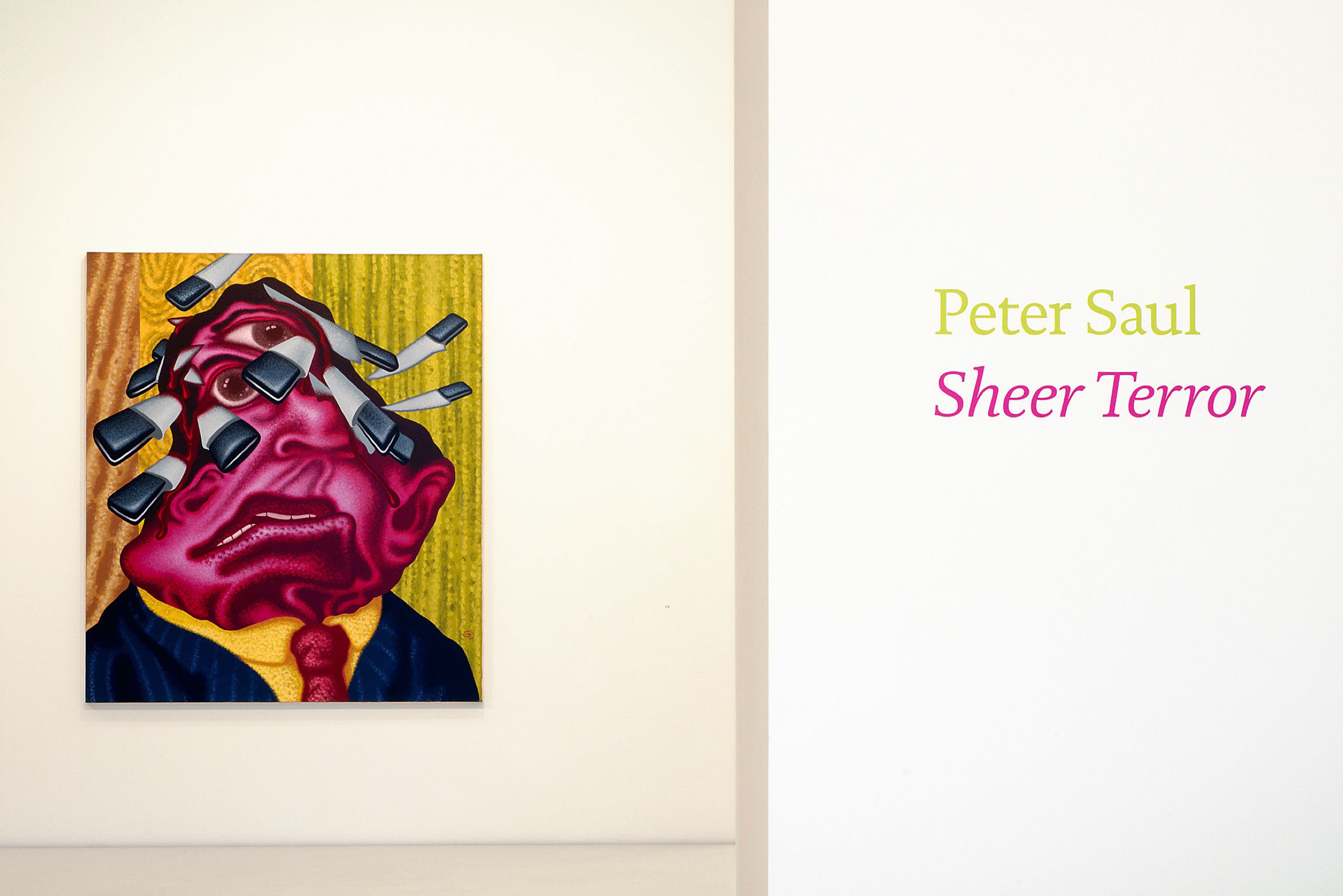 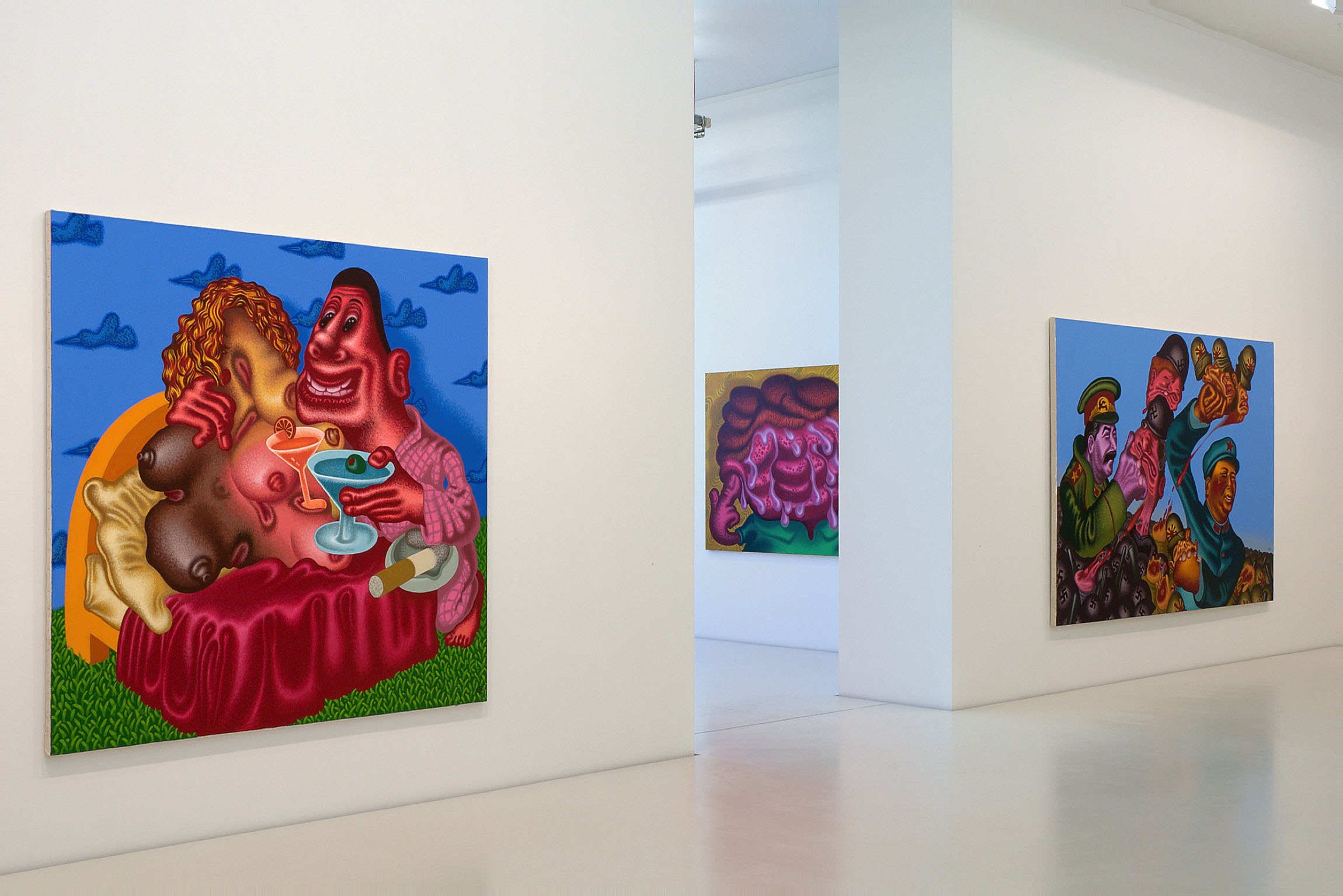 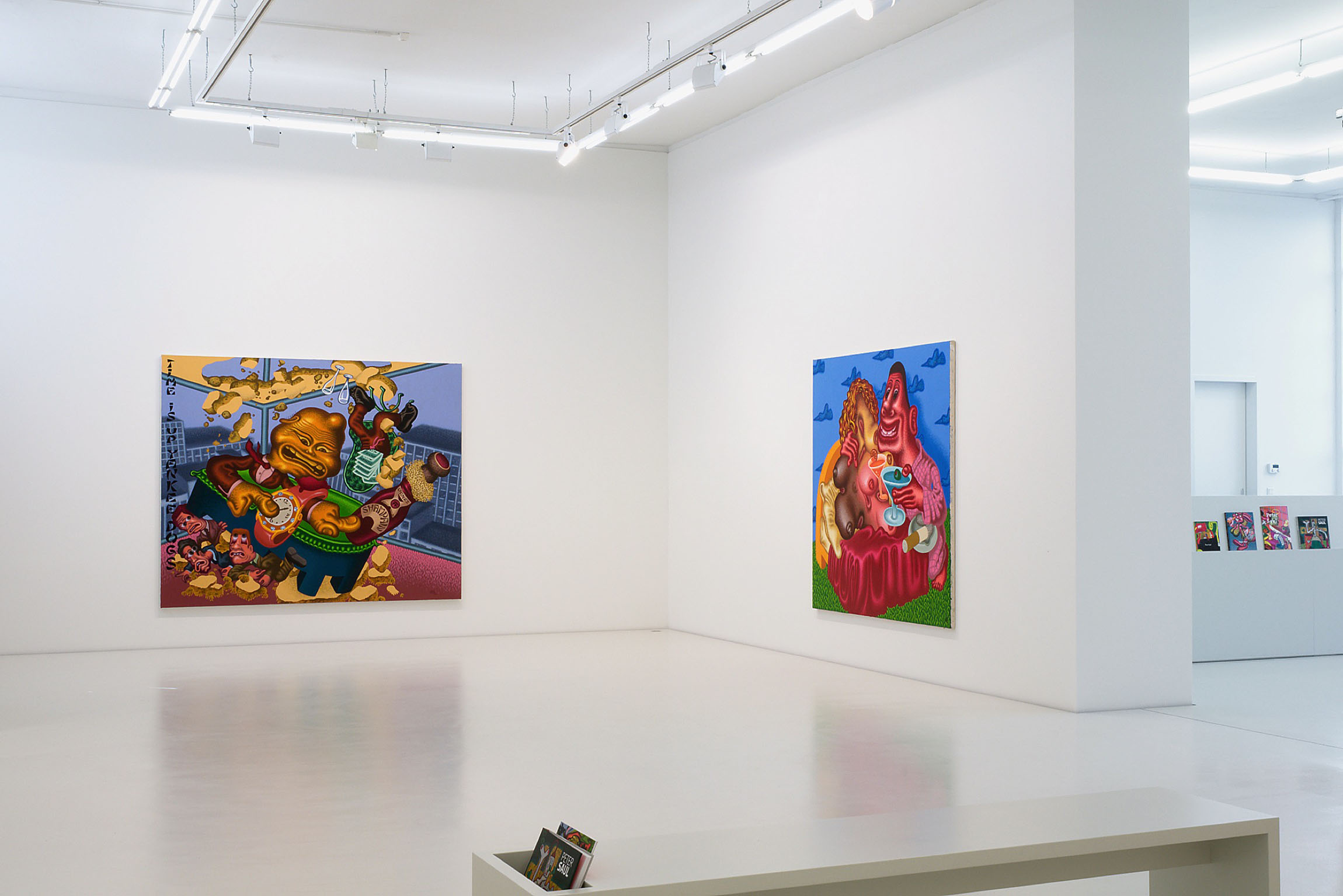 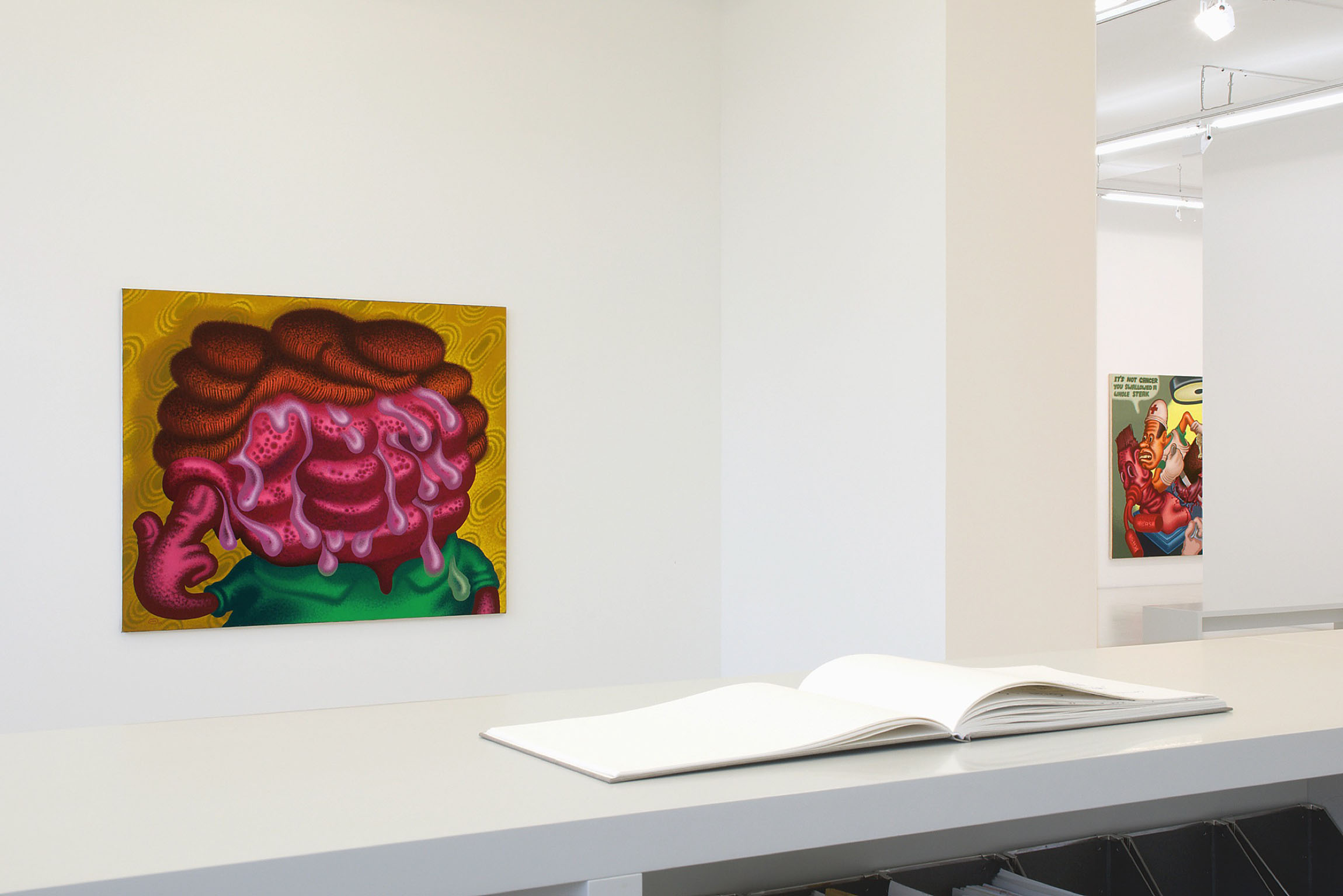 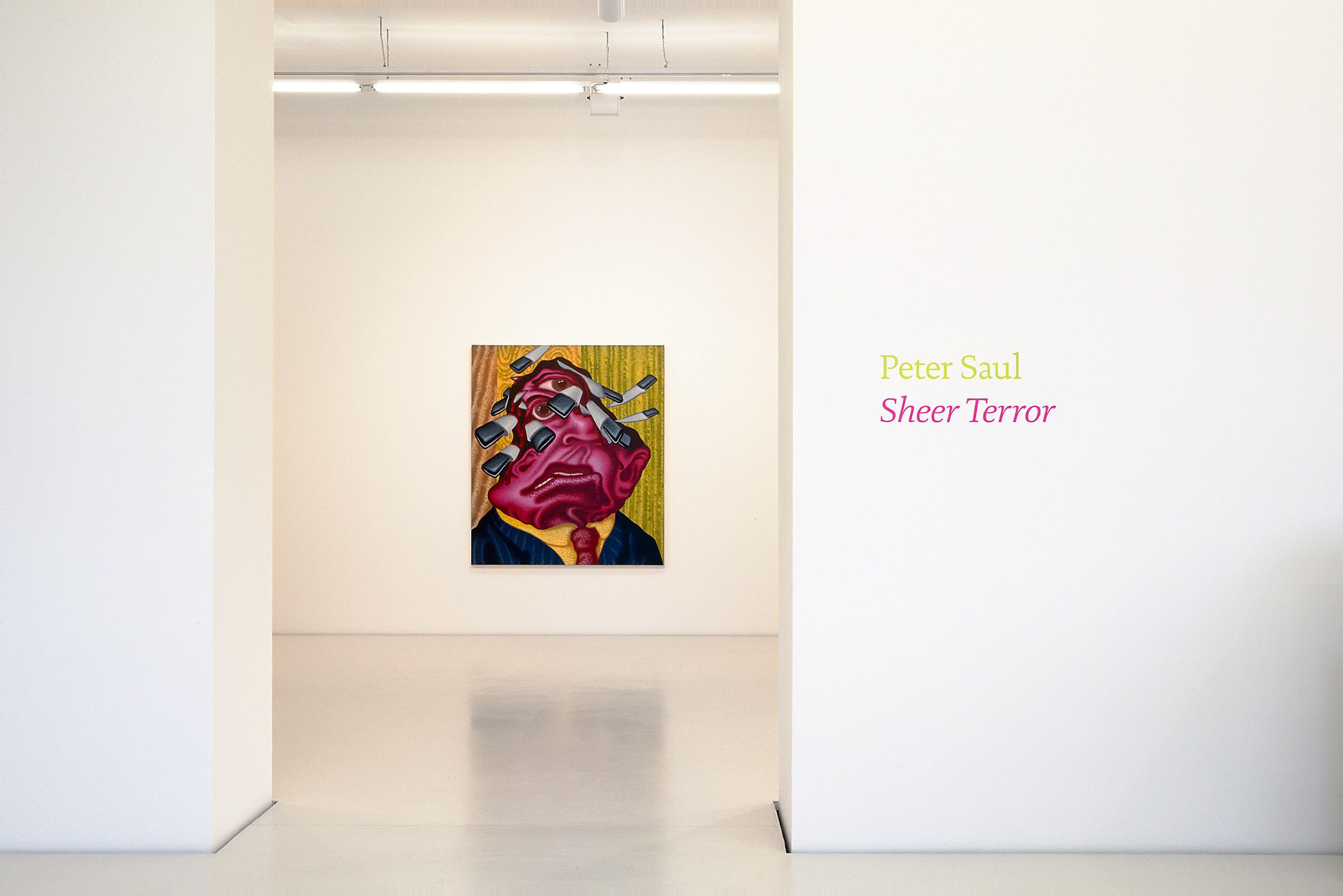 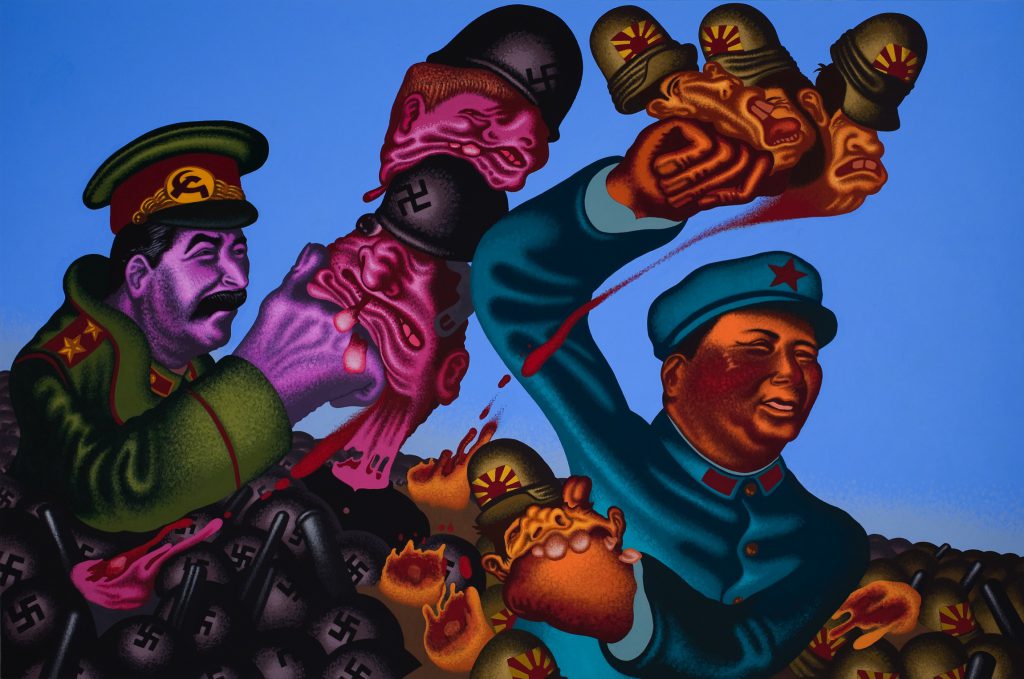 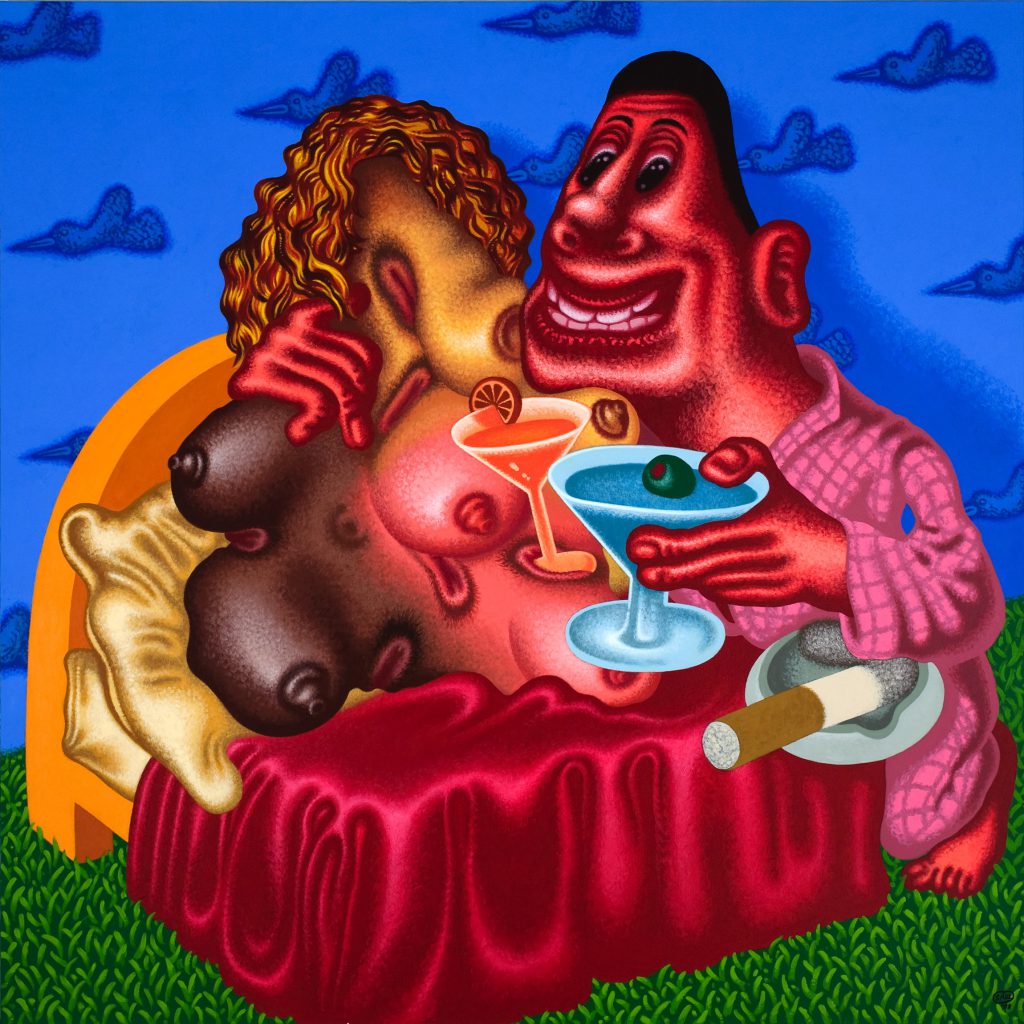 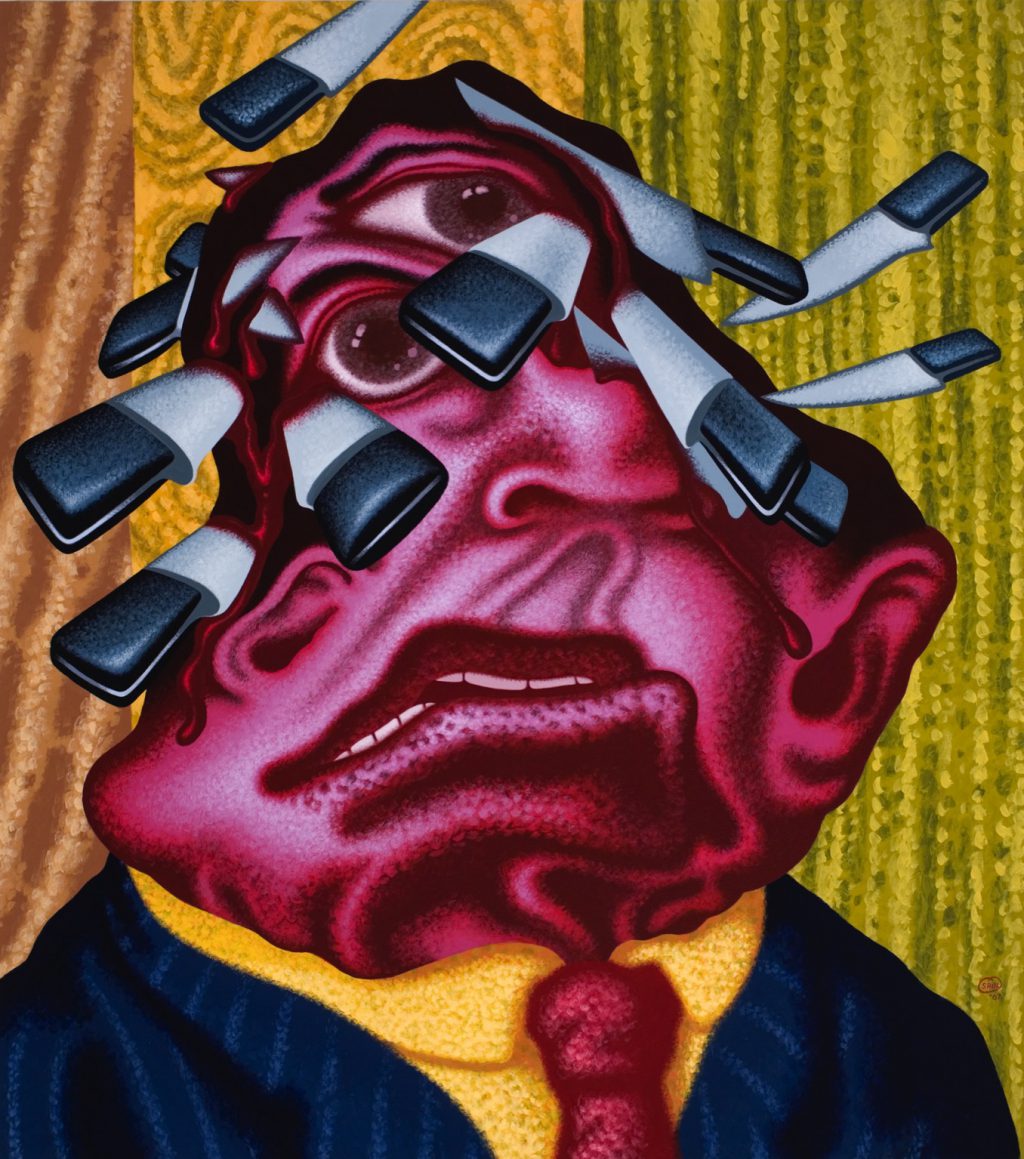 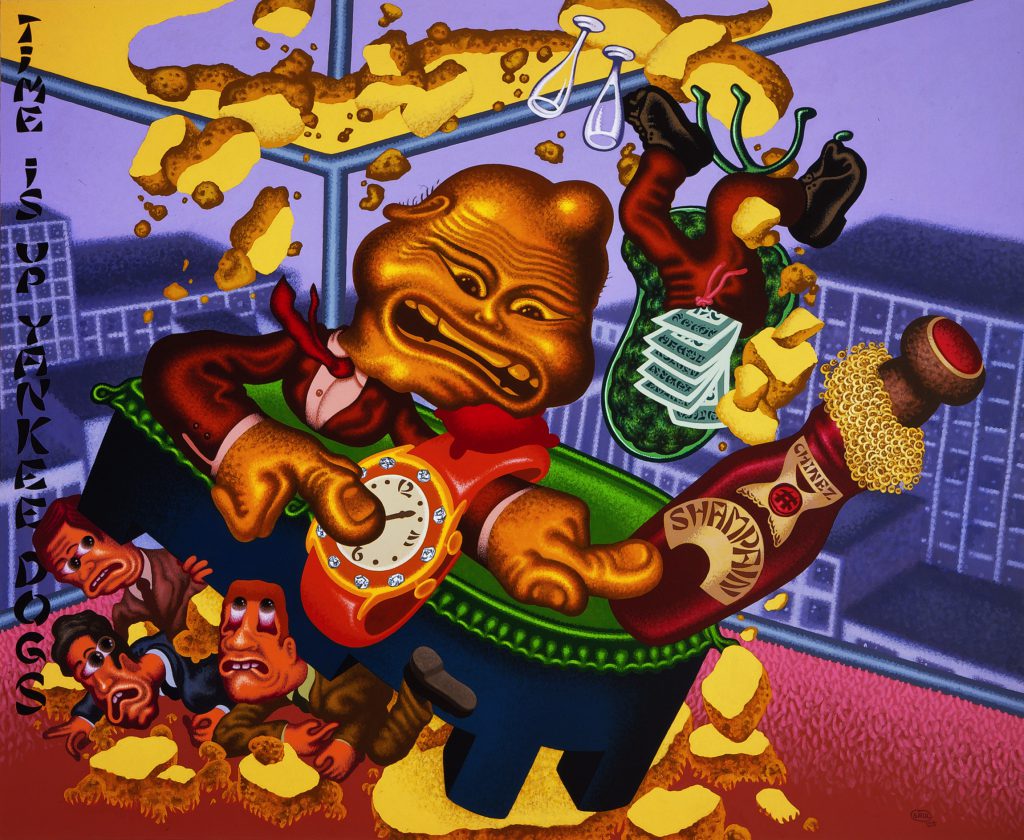 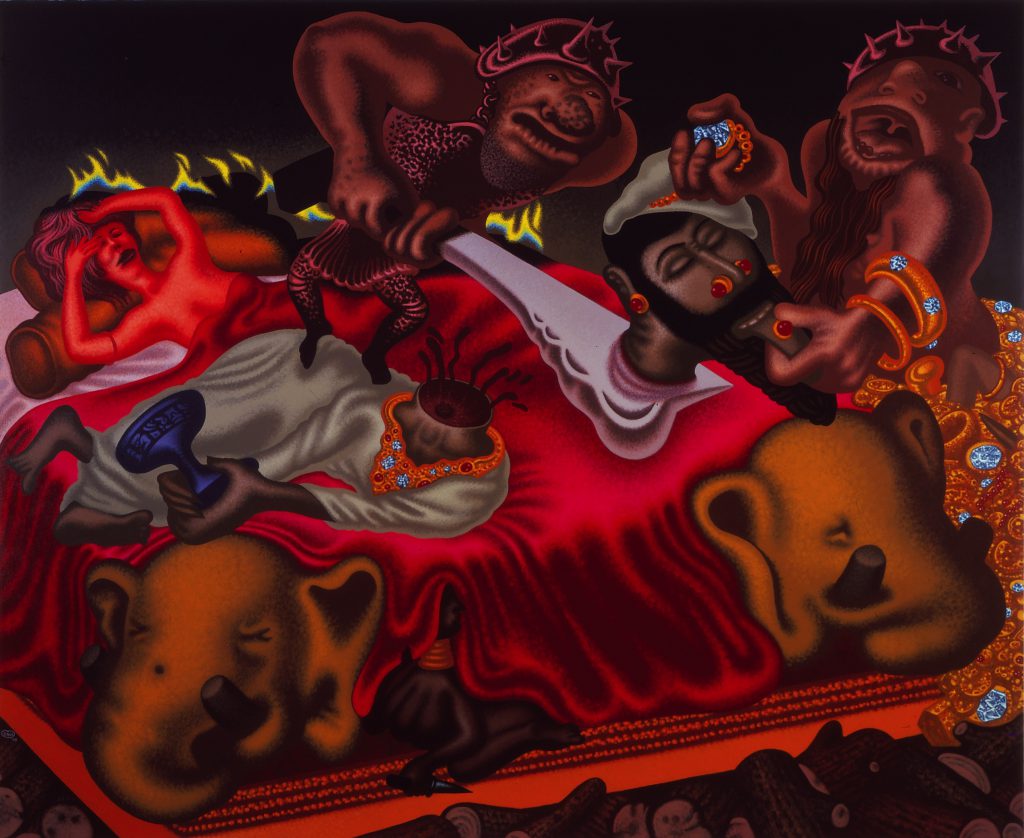 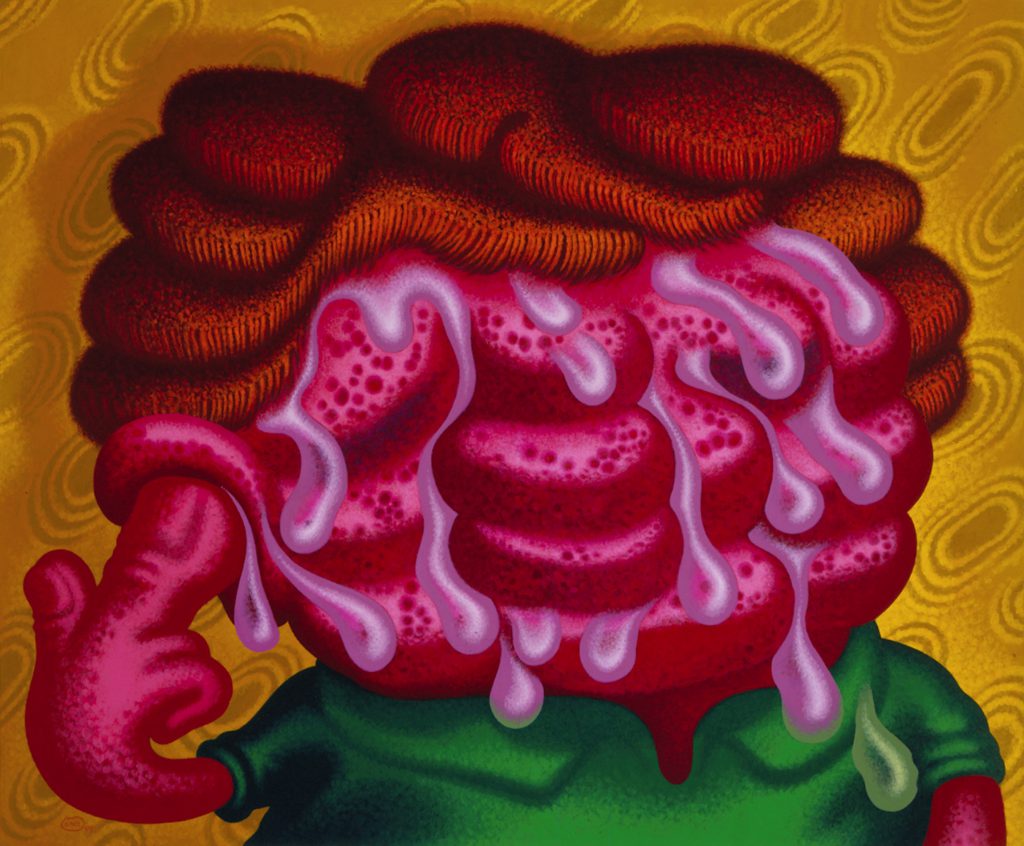 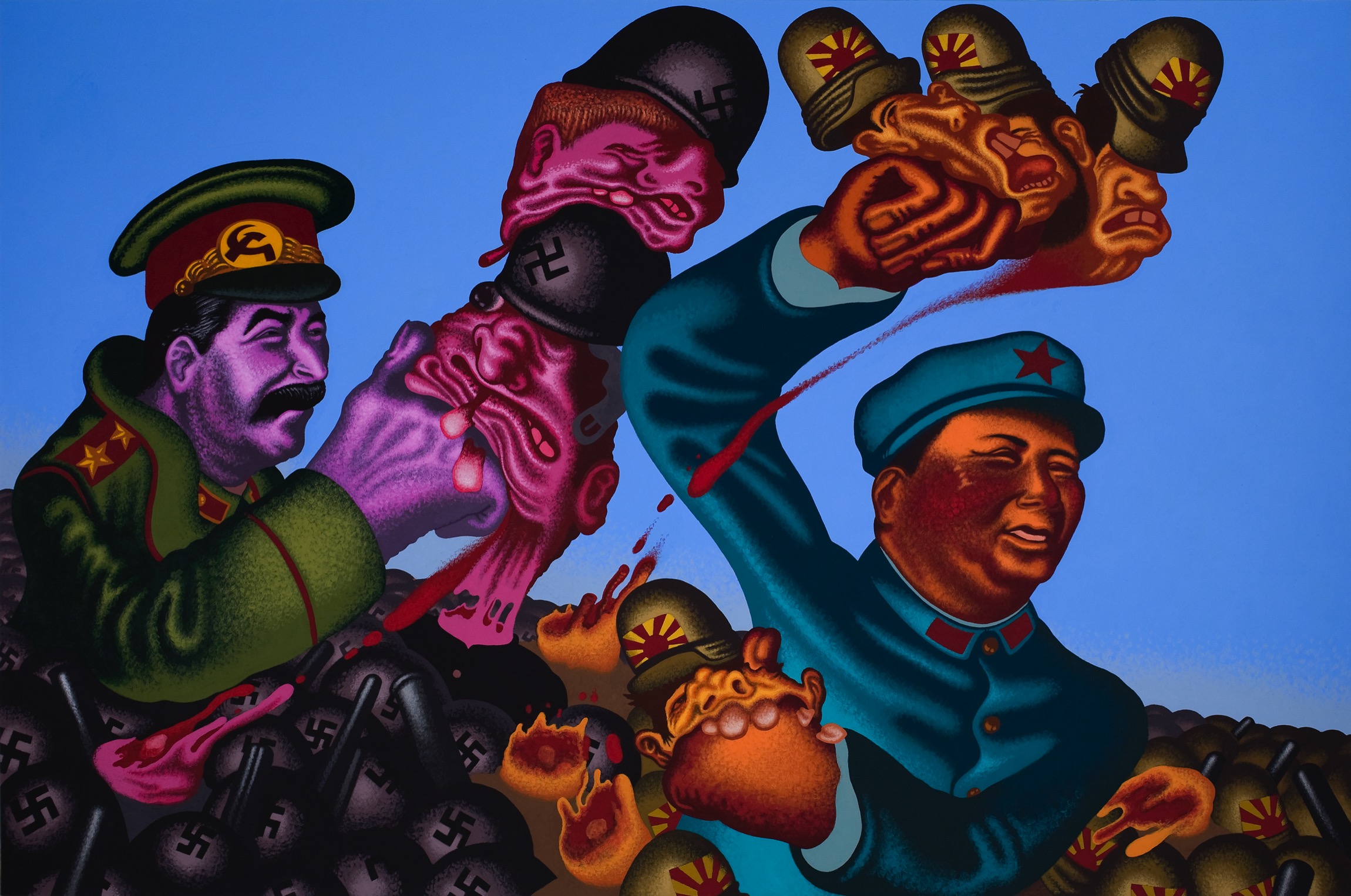 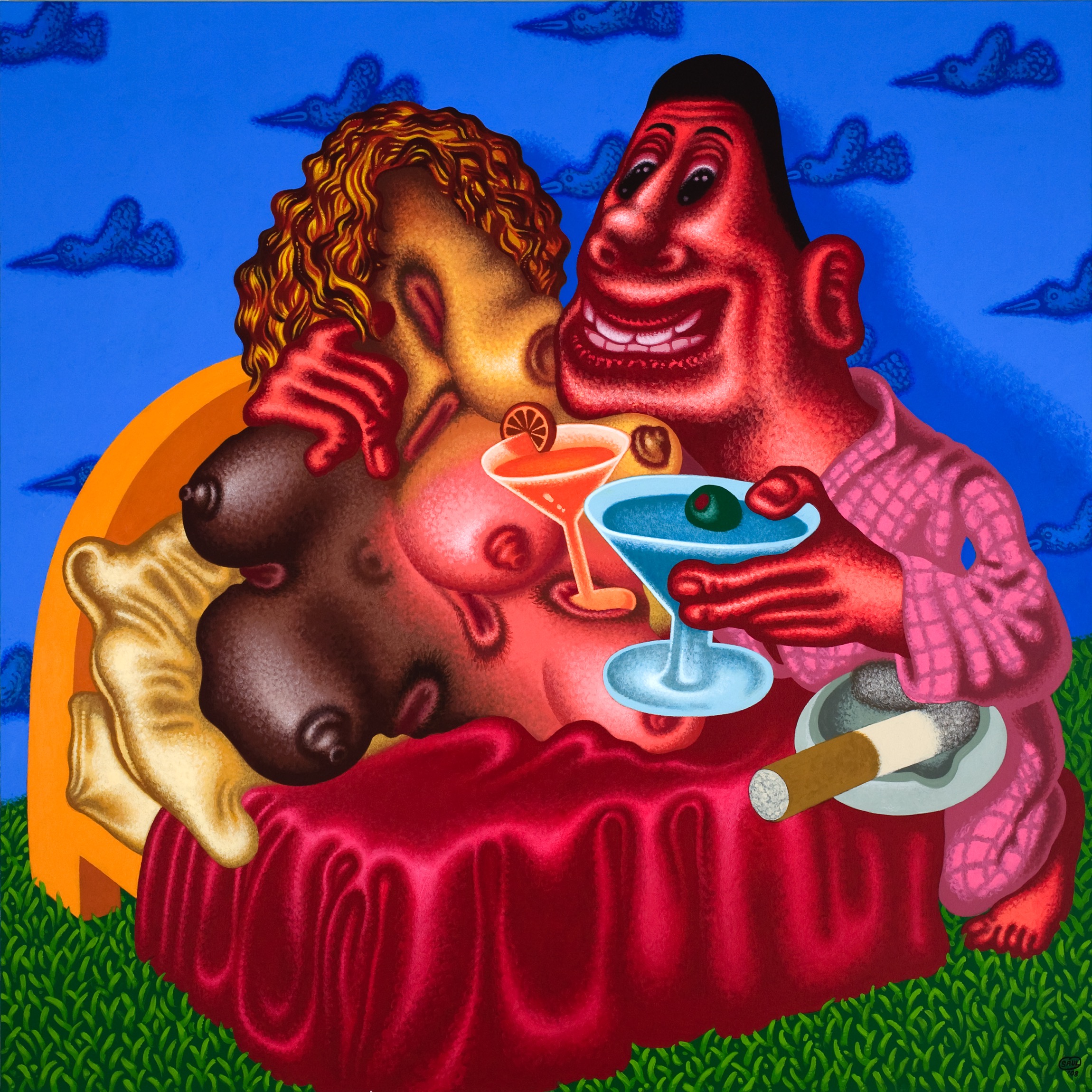 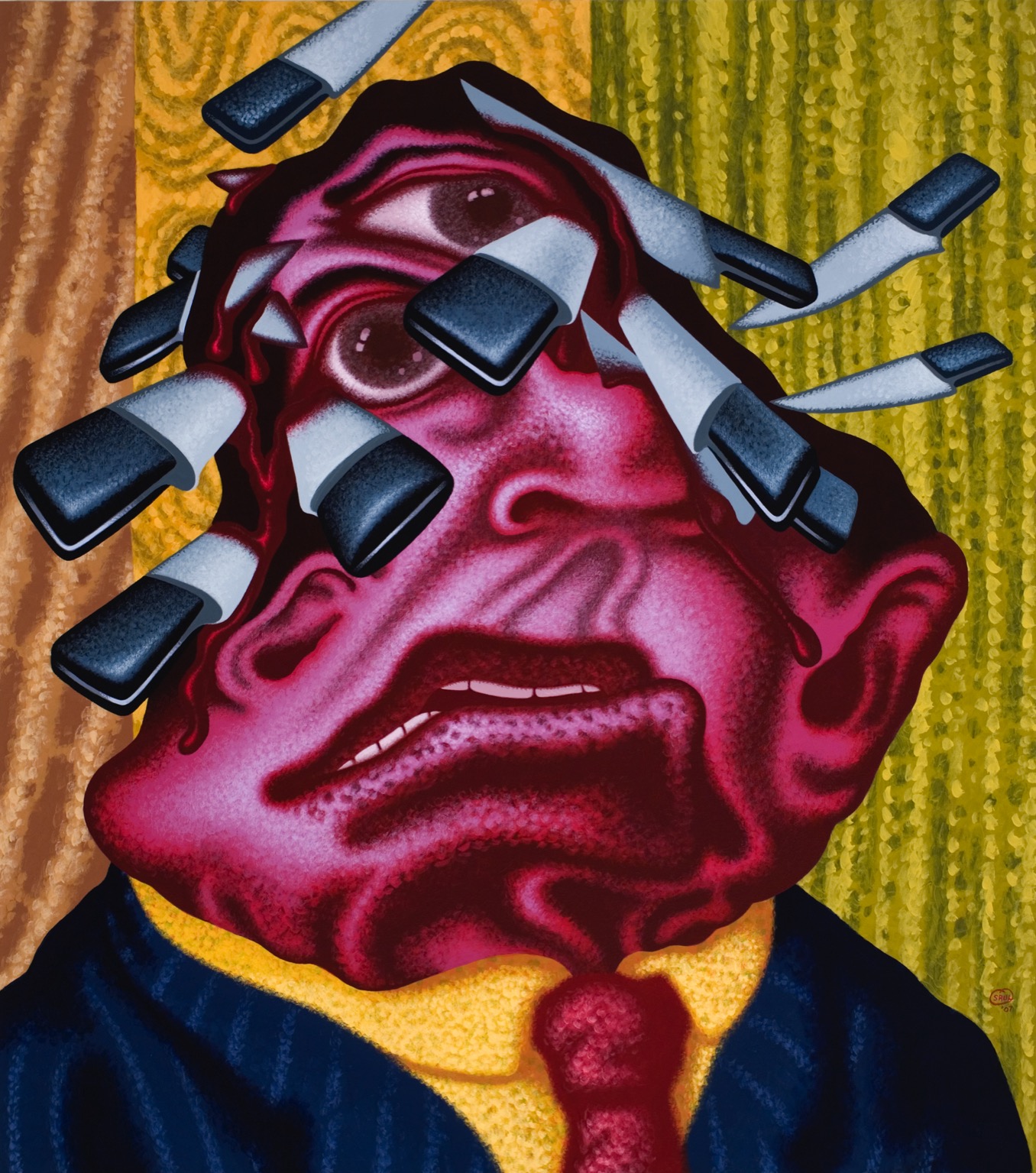 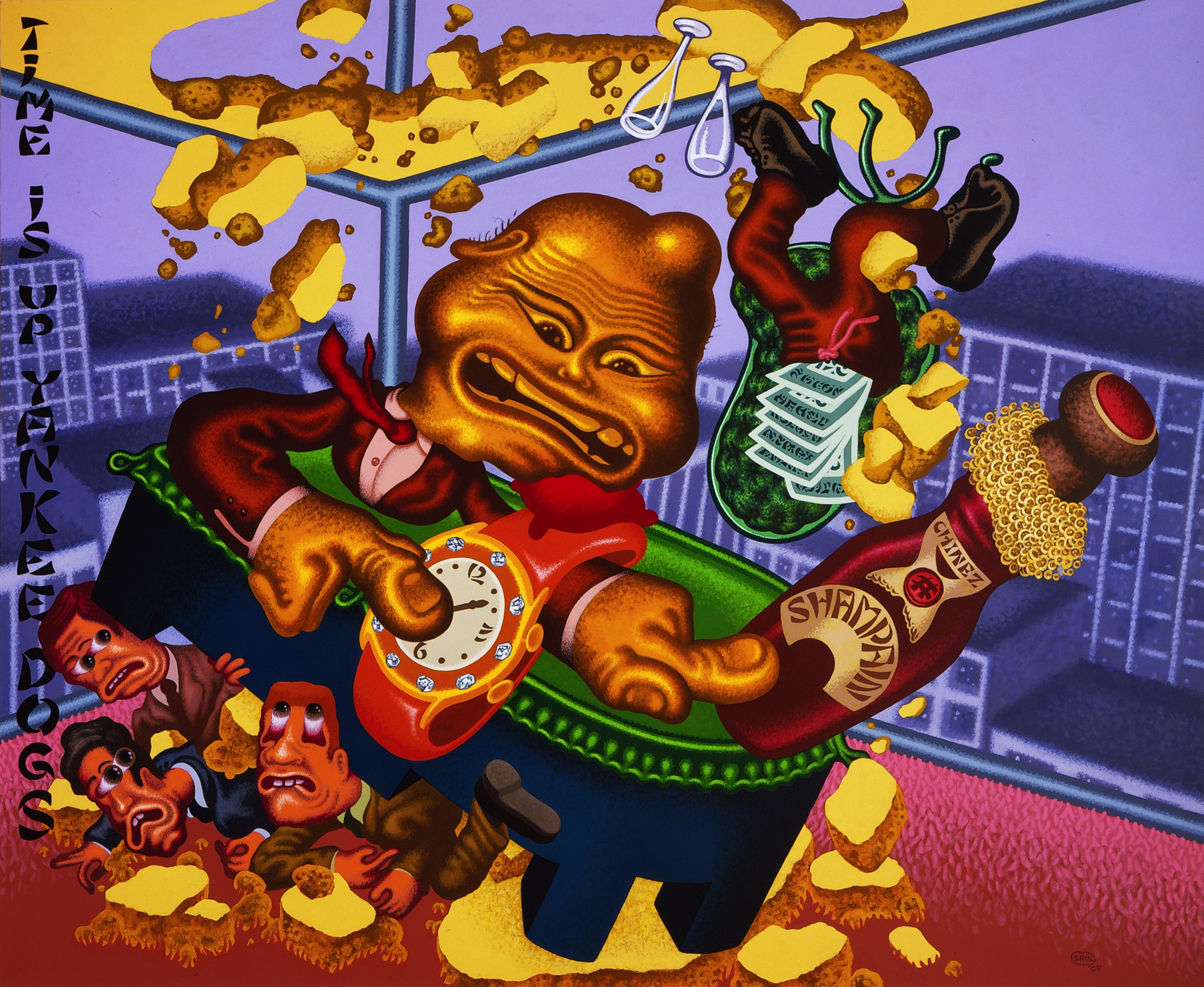 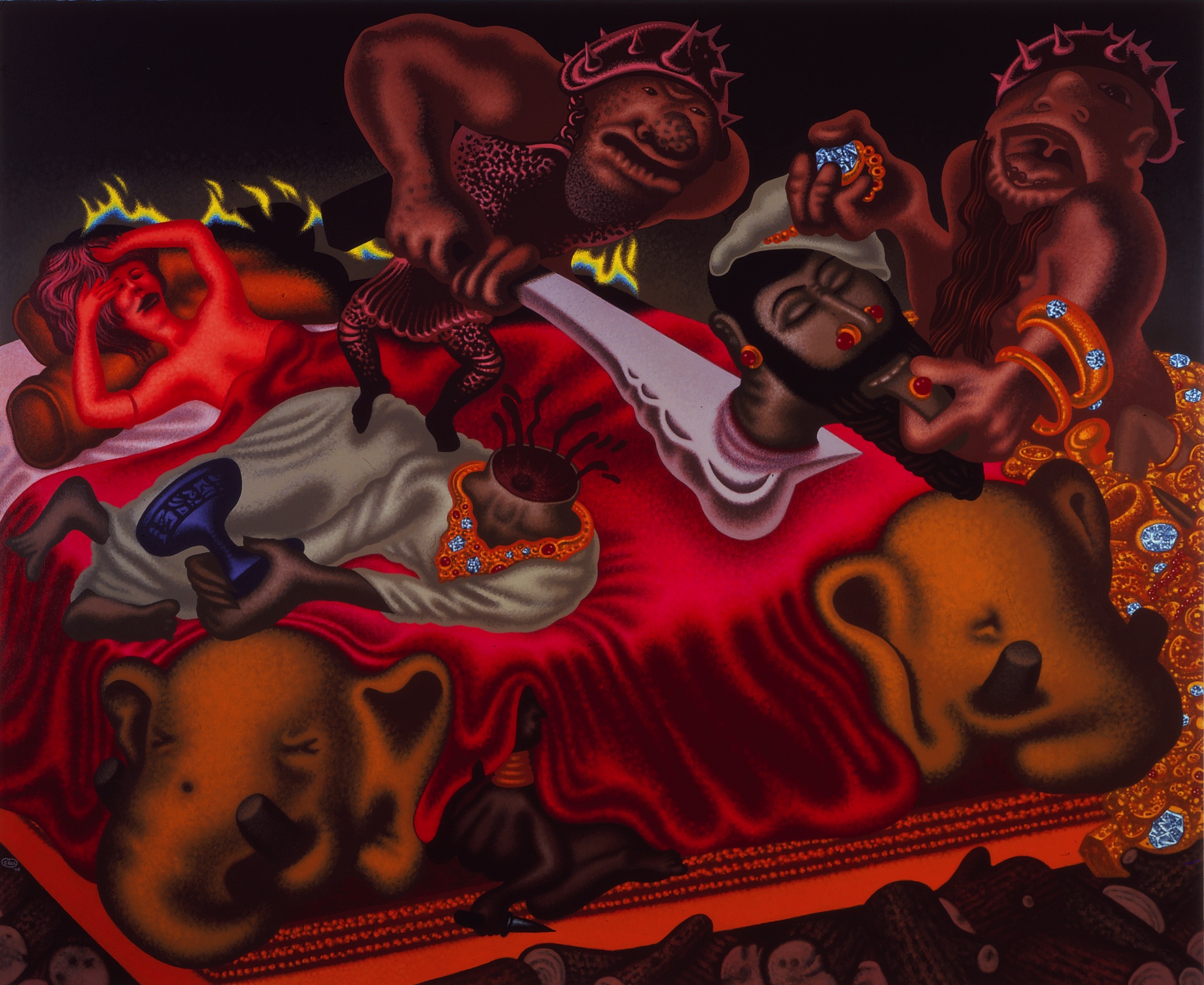 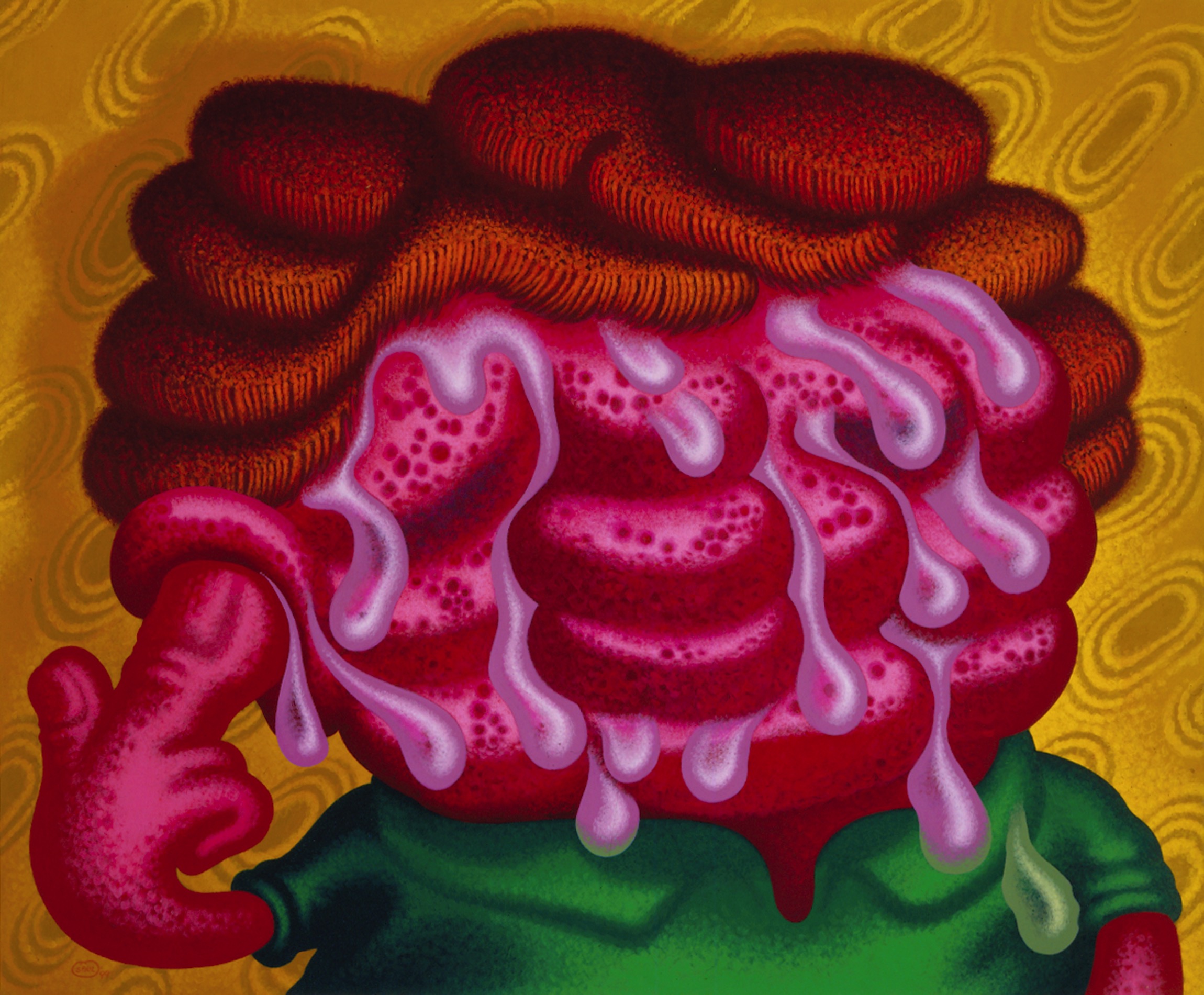 The exhibition “Peter Saul: Sheer Terror” — ten large-format paintings and a selection of works on paper — provides insight into the 75 year-old Provocateur-in-Chief’s work over the last decade. His undiminished influence on both younger and more established fellow artists marks him out as one of the most important painters to emerge in America after World War II. No subject is too taboo for him, no personality deserving of so much respect, that they cannot become subjects of his polemical and violent paintings. Despite the aggressive and acerbic tone of most of his art, by nature, Saul is reserved, sensitive, and thoughtful, which is reflected in the rather old fashioned artists who he admires, like Caillebotte, Cadmus, Ensor, Beckmann. An avid museum and gallery goer, Saul goes to see as much painting as he can in New York and on his travels. He learns from what he sees to create bells and whistles with paint and canvas to make viewers stop in their tracks at an art exhibition and notice his work.

From 1956 to 1964, Saul went to live in Europe. From afar, he witnessed the rise of Abstract Expressionism and the New York School as the zeitgeist of post-war American art. The paintings he made in Europe were unlike anything else being made at the time. Presaging the American artist, Phillip Guston, they were both expressive and figurative, and featured distinctly unartful motifs such as iceboxes, cars, toilets, and Donald Duck. From today’s vantage point it is clear that Peter Saul had established himself as a progenitor of what became widely known as American Pop Art. In late 1950s’ Paris he befriended the Chilean surrealist and Abstract Expressionist Roberto Matta and scored his first successes in the “Salon de jeune peinture”. His first solo exhibitions were to follow in New York and Chicago in 1961.

Upon his return to America in 1964, Saul’s style veered away from the expressive and painterly in favor of a hard-edged figurative style featuring distorted anatomy, acidic psychedelic colors, and an all-over, chaotic composition that created an animated drama and tension within the frame of the canvas. This highly charged cartoon style served the artist as a means to comment, during the late 1960s and early 1970s, on the profound rift within American society over the Vietnam War and the struggle for racial equality.

Despite the harsh tone of Saul’s political paintings, he retained his sense of humor and poked fun at art world personalities, politicians, and notorious celebrities, from nuclear spy Ethel Rosenberg to football star O. J. Simpson, from president Ronald Reagan to financial fraudster Bernie Madoff. Well aware of the importance of the history of portraiture in Western art, Saul satirizes this genre in paintings like “Cold Sweat” (1999) and “Stuck” (2007). History painting is another favorite of Saul’s, and we feature in this exhibition “Sardanapulus” (2005), a painting elaborating on Eugène Delacroix’s “The Death of Sardanapalus” (1827), though Saul’s version takes place 20 minutes after the king’s dramatic suicide. “Stalin + Mao” (2009) shows the two men as a superhero duo bashing in the heads of the Germans and the Japanese during World War II. Saul’s imagination is also fed by current events, as evident in “Chinese Businessman Lands on Wall Street” (2006), a humorous portrayal of China’s rise to the status of an economic superpower.

At the age of 75, Saul continues to transform his own style and technique, creating paintings that are refreshingly contemporary. Recent paintings, like “Viva la Difference” (2008), “Raccoon Artist Surprises the Art World” (2009), “Death by Champagne Cork” (2009), “Manz Best Friend” (2009), and “It’s Not Cancer” (2009), feature Saul’s irrepressible sense of humor and irony. He approaches life, death, love, and companionship with a keen appreciation for the human condition.

Peter Saul has shown widely throughout Europe and the United States. In 2008, three American institutions – the Orange County Museum of Art in Newport Beach, the Contemporary Art Center in New Orleans, and the Pennsylvania Academy of Fine Art in Philadelphia – organized a major and widely noted retrospective of his career. His works can be found in the collections of many museums, among them the Centre George Pompidou and the Musée du Louvre in Paris, the Museum of Modern Art and the Whitney Museum in New York, and the Art Institute in Chicago.