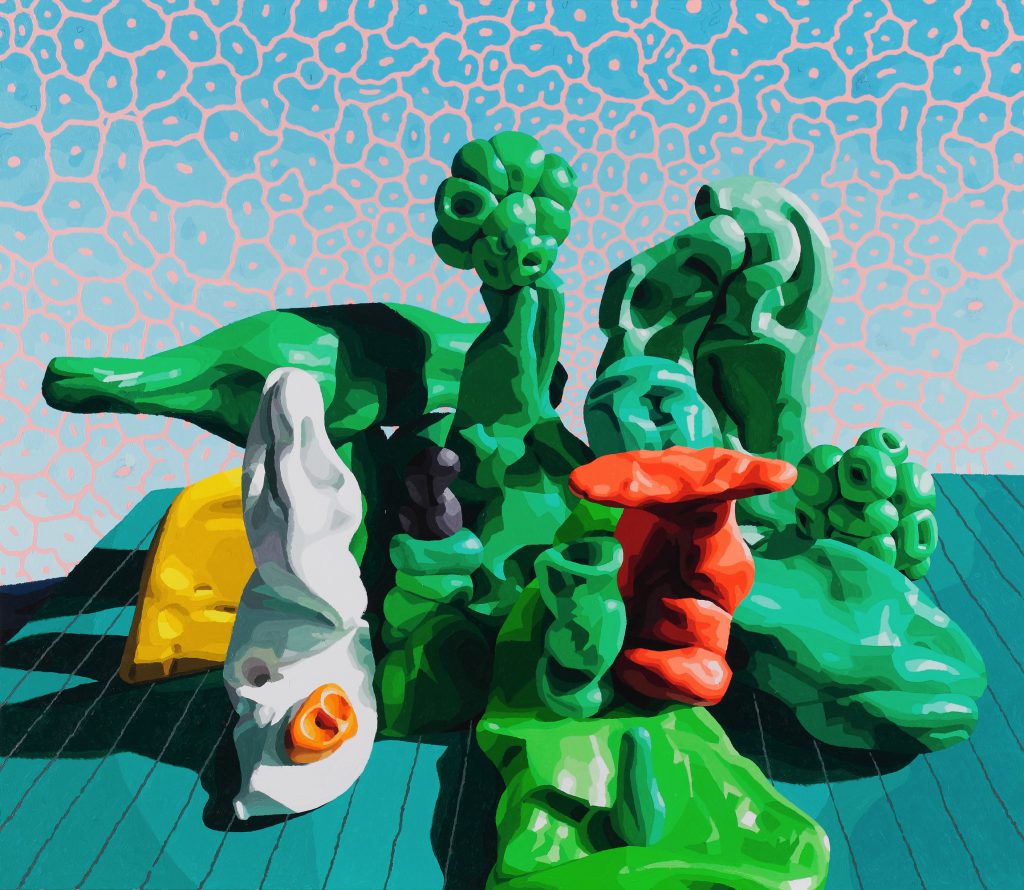 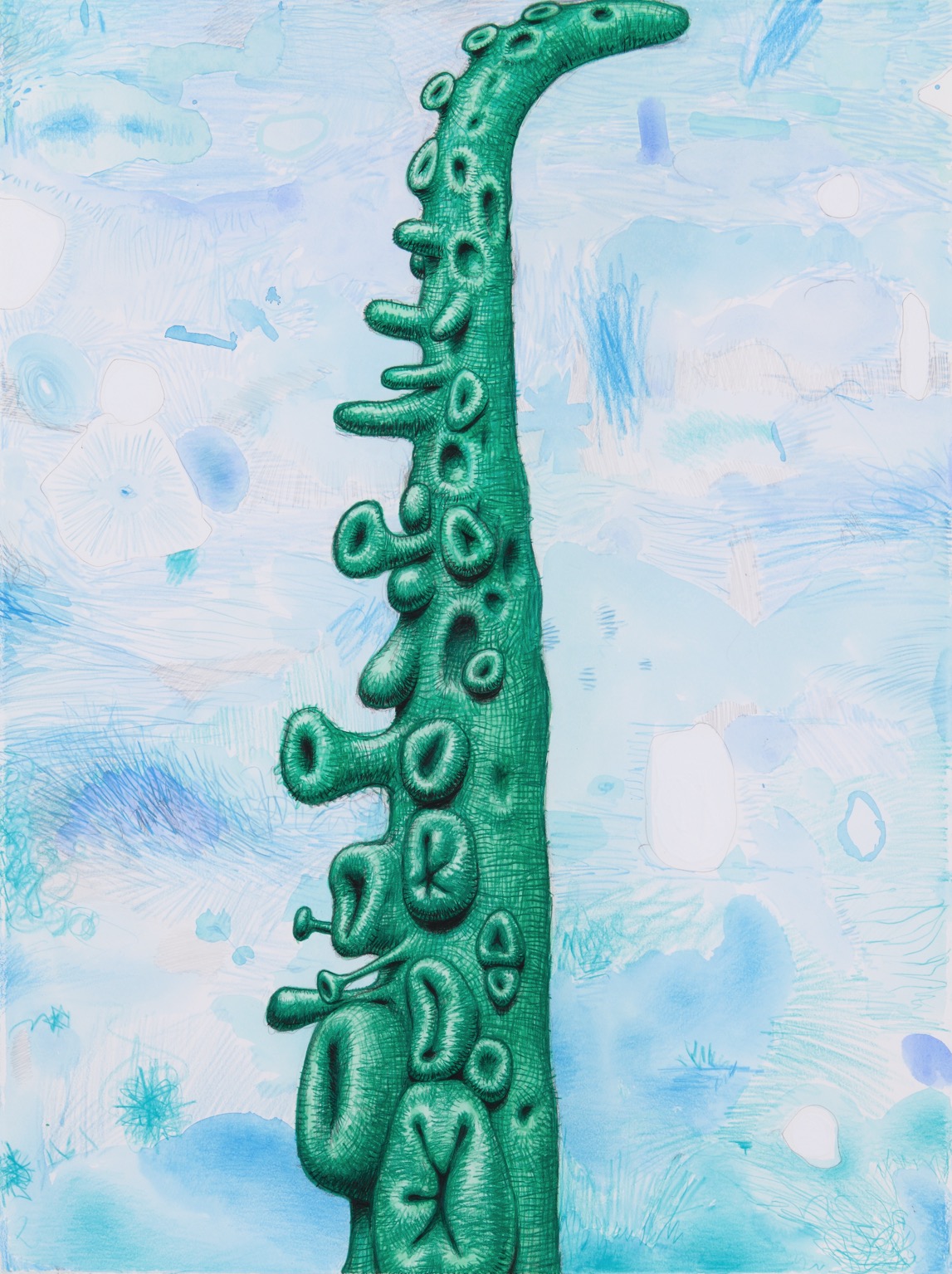 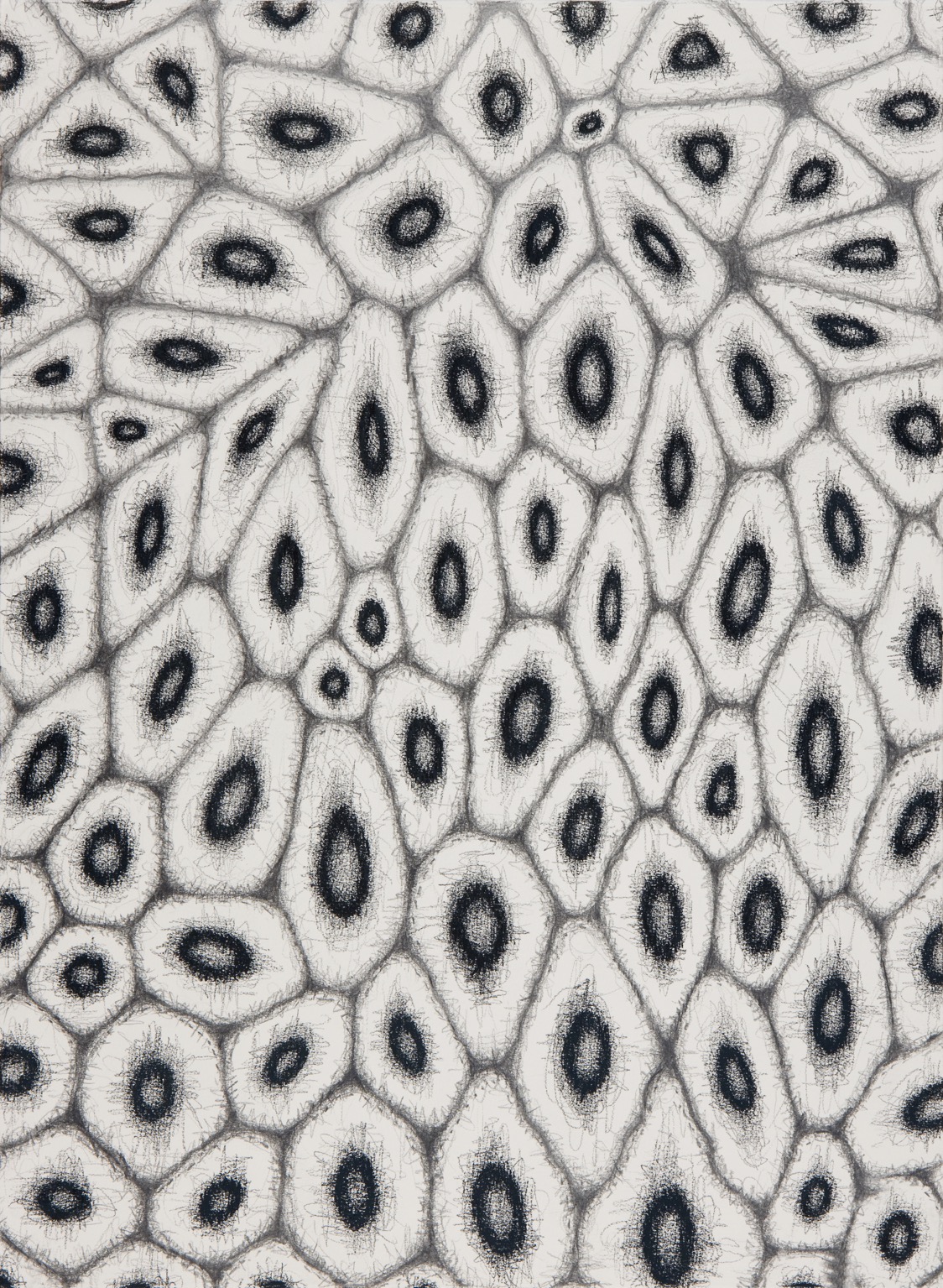 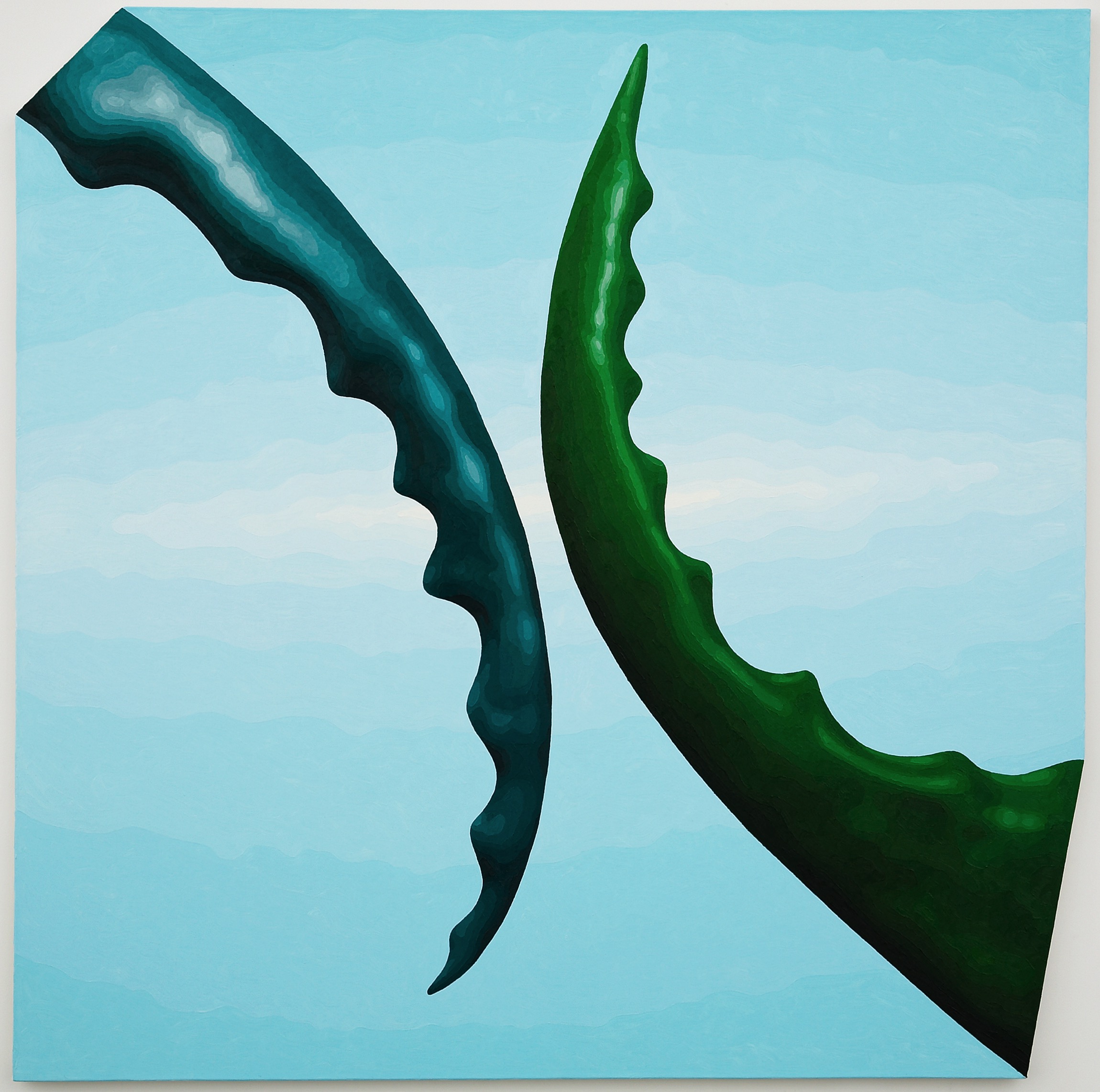 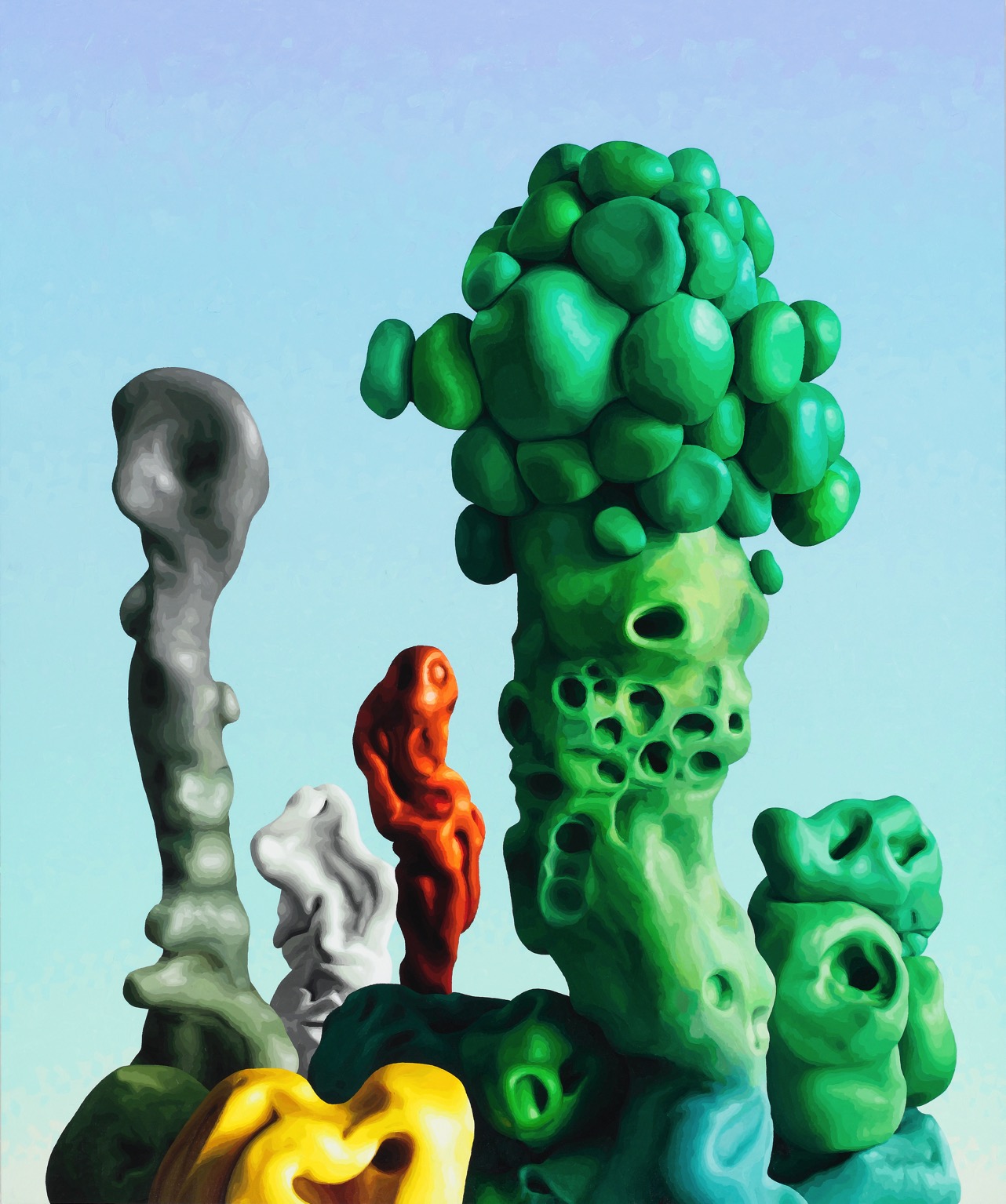 The studio of New York artist Alexander Ross can best be descibed as a laboratory where the natural and artistic worlds collide. His process is experimental, but essentially simple. Each work begins with his creation of plasticine models that suggest cellular structures, plants and scientific specimens. After photographing the models and manipulating the resulting images in Photoshop, he then paints these newly altered and digitized versions of reality.

Like a microbiological sorcerer’s apprentice he creates worlds that appear to be based on scientific accuracy, but originate entirely in the artist’s imagination. The suggestive power of his paintings lies in the the synthesis of abstraction and representation, nature and artifice – and his dramatic play with scale. Known for his color palette of muted greens, grays, and blues, Ross’ sensual application of paint and labored surfaces convey a synthetic quality reminiscent of science-fiction and unearthly discoveries. At the same time the works evoke landscape and ecological elements found in the natural world. The forms rendered in the paintings look like computer generated images, emphasizing their otherworldliness.

Recently, Ross has become inspired by the tradition of painting en plein air. This new interest has expanded his practice in the studio to evoke the spontaneity and romance of recreating nature as if he were standing in the midst of it outdoors. For the first time, realistic landscapes appear in his paintings as though we are experiencing the images from an airplane or an overlooking mountain. The light and colors of these new works are more vibrant but still have the flat graphic quality that is the artist’s signature. They embrace notions of virtuality, spanning from Yves Tanguy’s iconic skies to the contemporary aesthetics of Google Maps.

Nolan Judin are pleased to present 20 new paintings and drawings in Terrestrial Exemplars, the gallery’s second exhibition with Alexander Ross in Berlin.

Born in Denver, Colorado in 1960, Alexander Ross earned his B.F.A. from Massachusetts College of Art in 1983. His works have been exhibited in museums and galleries worldwide since the mid 1990s. In 2005, he was part of the pivotal group show Remote Viewing at the Whitney Museum of American Art, propelling his name into the international spotlight. The same year, he was honored with a solo show at The Contemporary Art Museum in St. Louis that surveyed the previous eight years of his work. Many museums, including the Museum of Modern Art in New York, have acquired his work for their permanent collections.