How Soon is Now 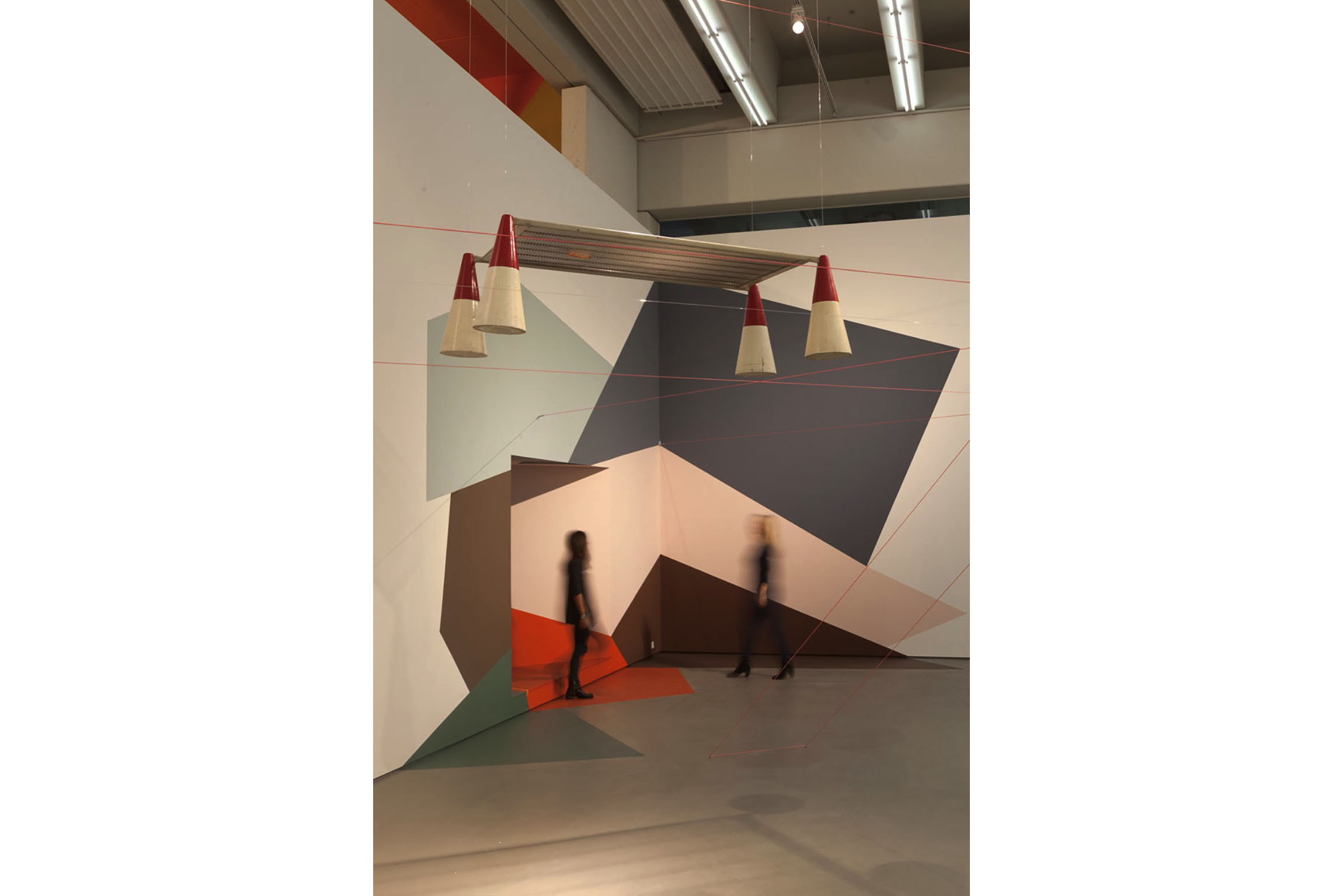 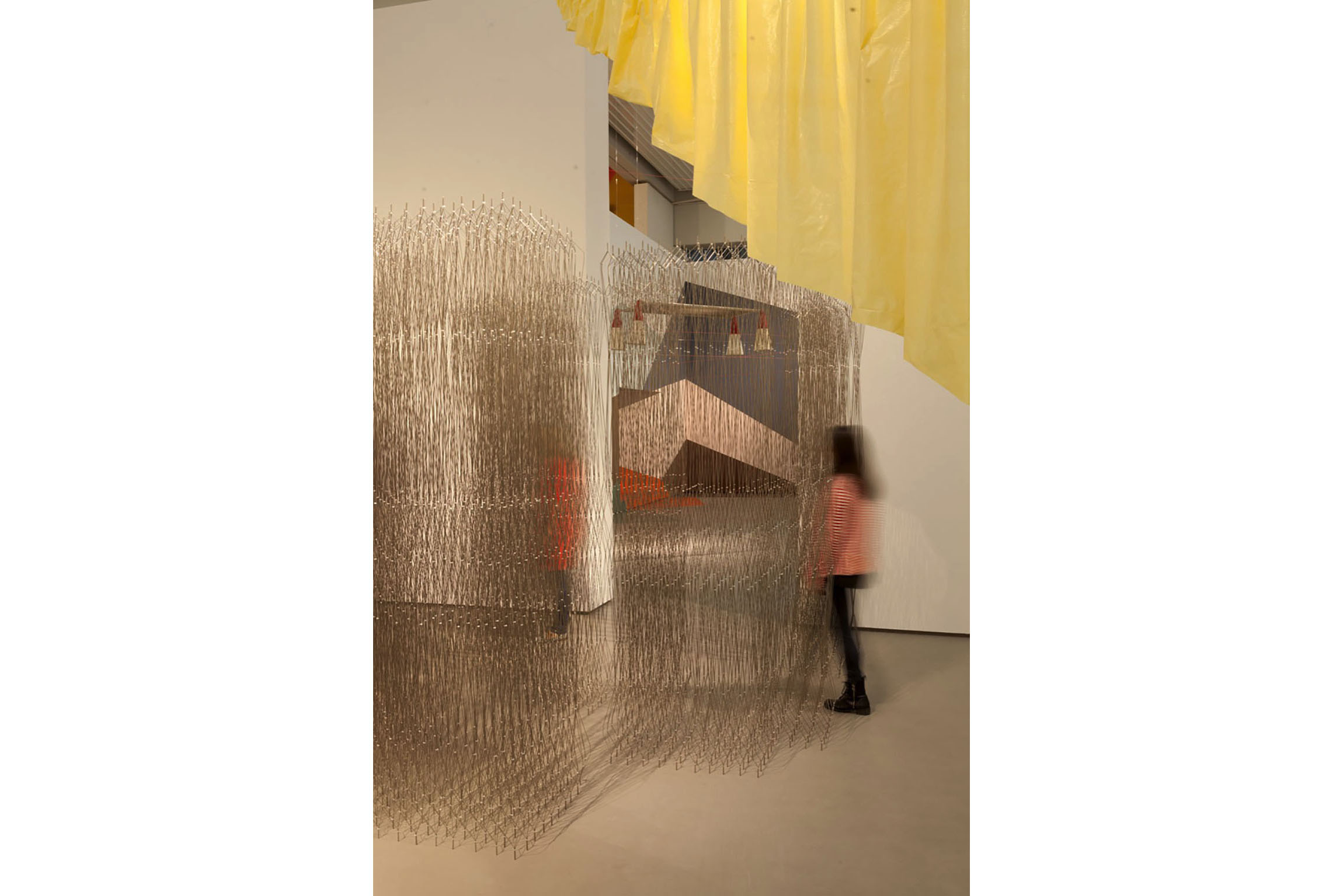 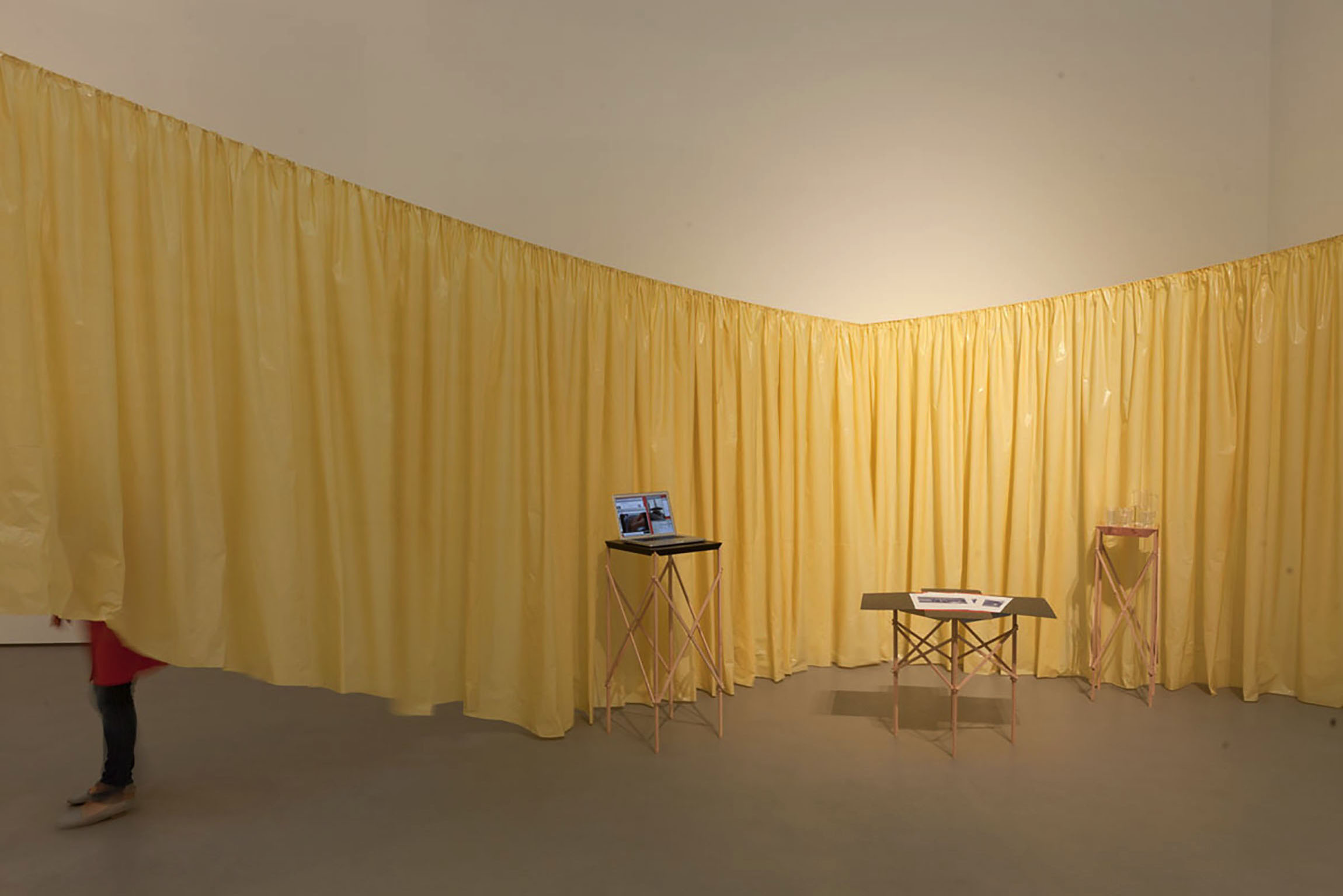 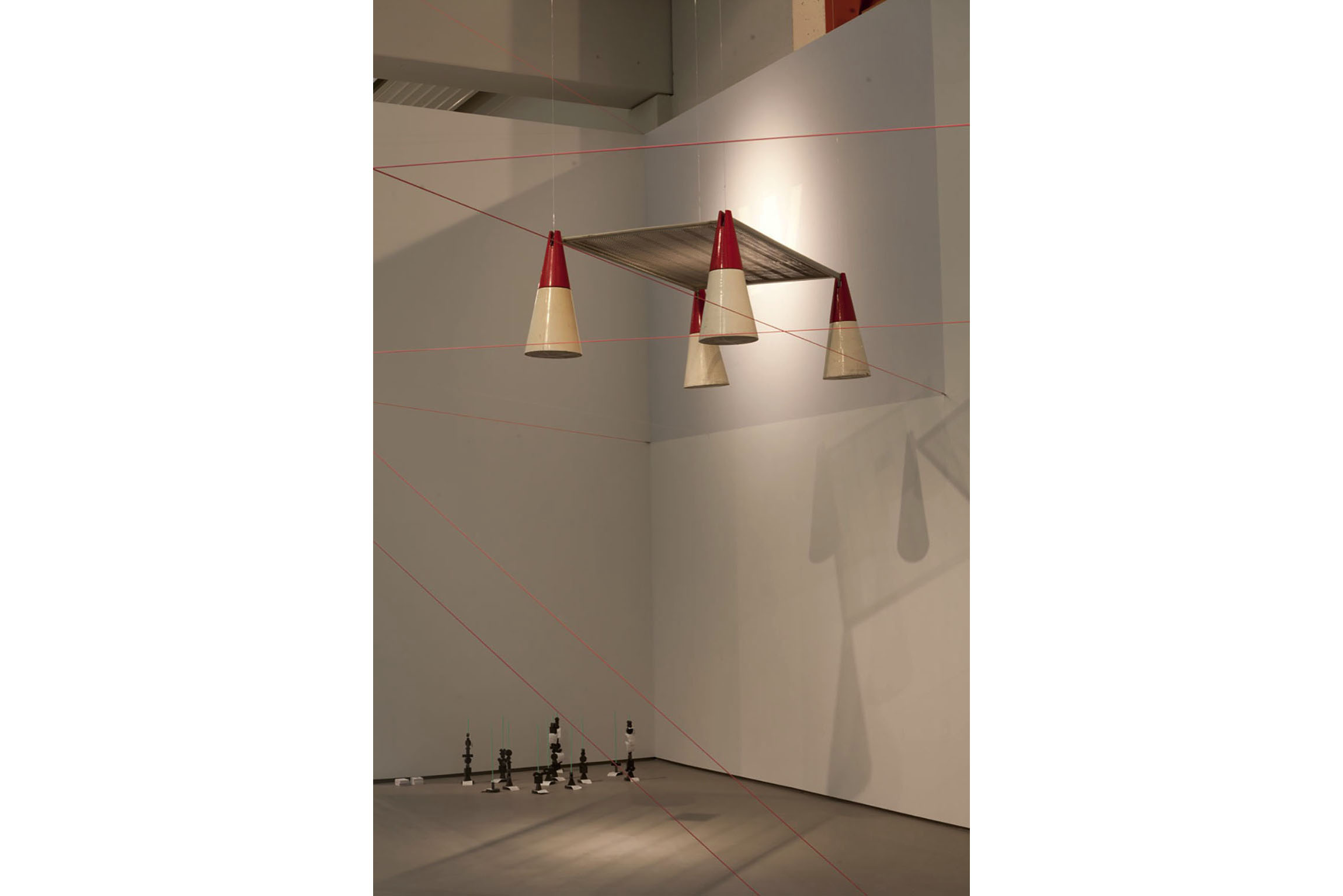 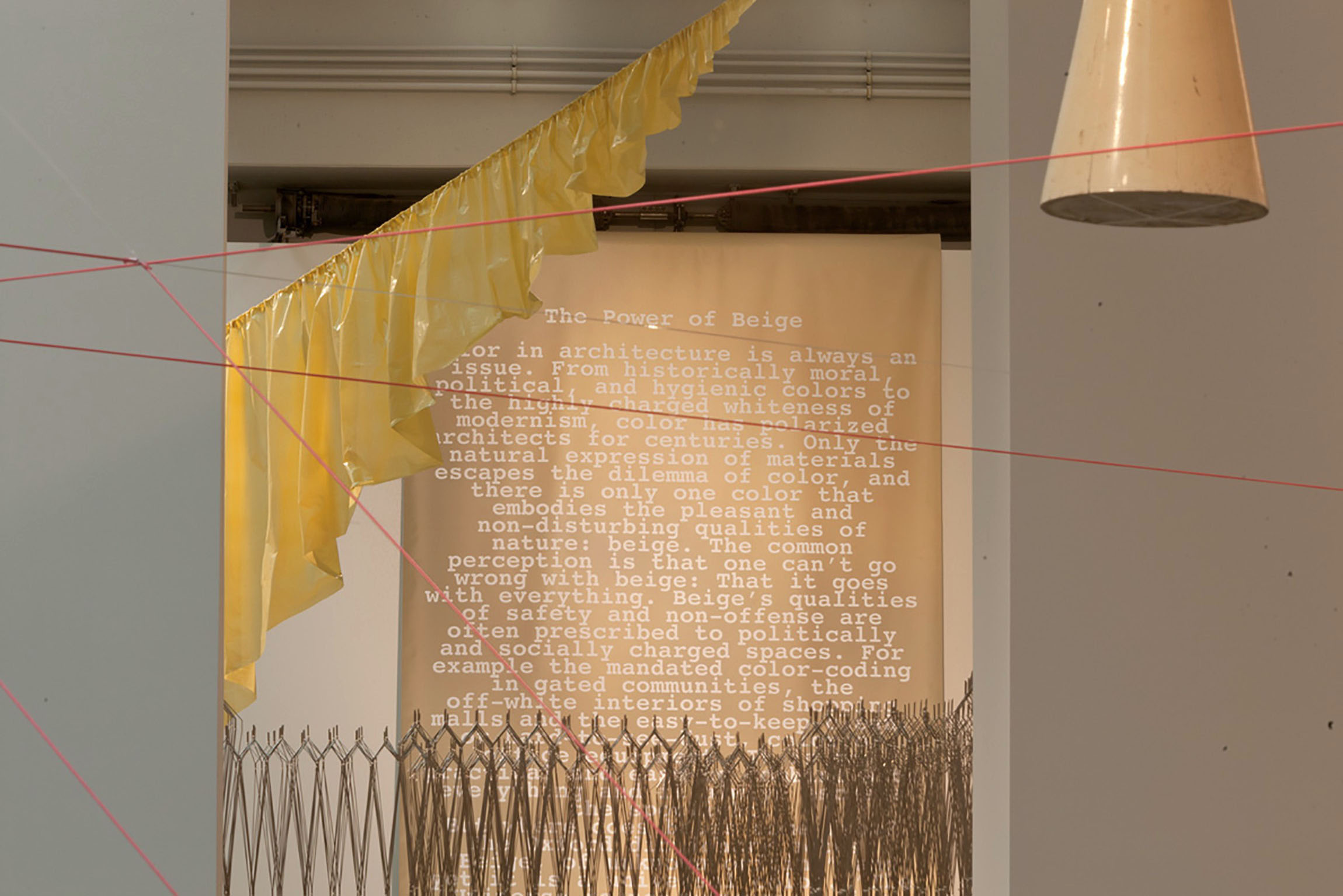 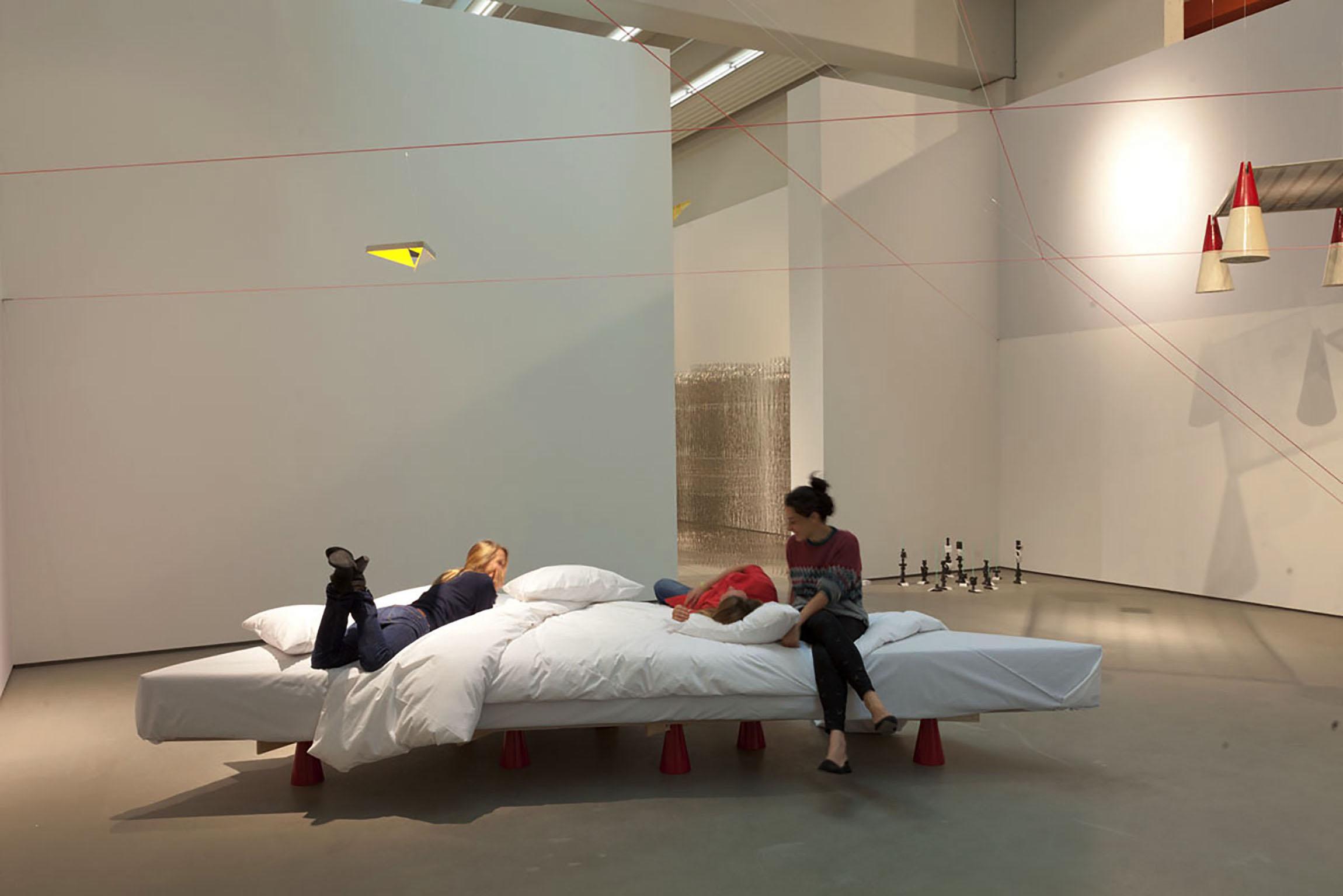 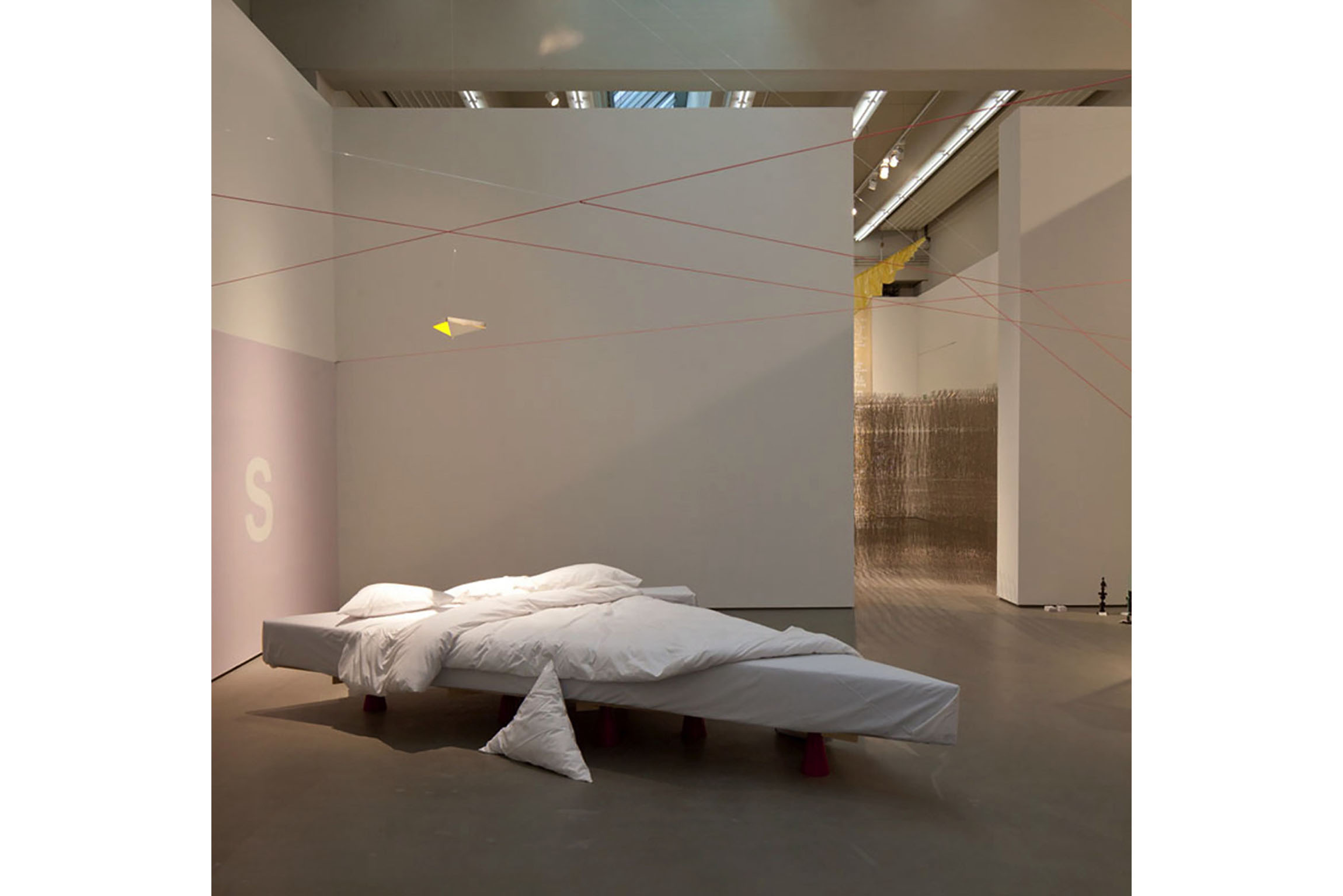 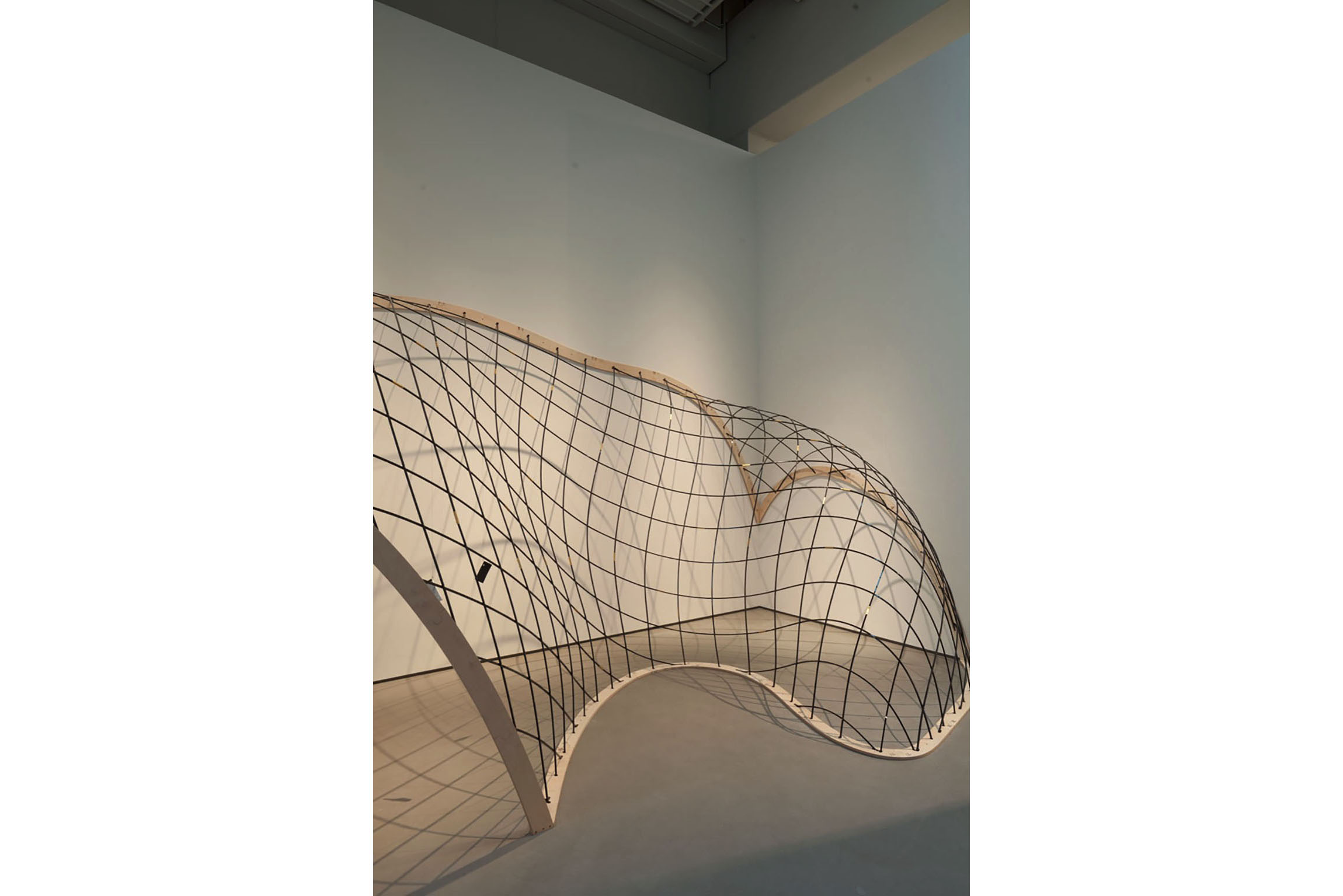 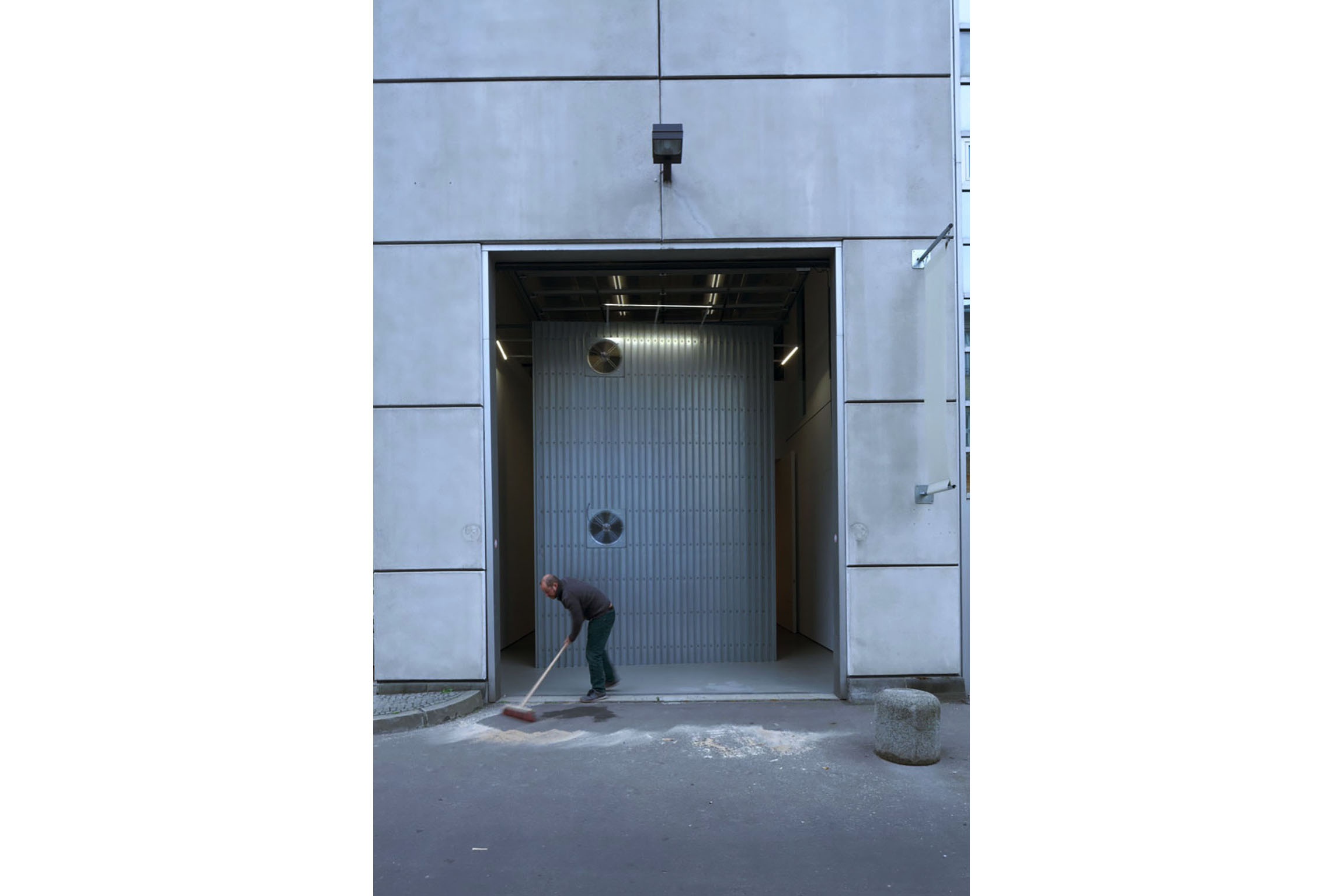 An exhibition by a group of 12 Berlin-based studios of architects, designers and engineers revisits some themes of the legendary exhibition This Is Tomorrow, held at the Whitechapel Art Gallery in London in 1956.

Given the range of contemporary social, economic and ecological issues in combination with the acceleration of technological change, we are positioned in an inclusive and complex time. If yesterday’s tomorrow is not today, how soon is now? What values and possibilities can we imagine with a more speculative approach that is unburdened by the constraints of everyday practice?

Through spatial interventions and manifestos, the exhibition will discuss what today’s sensibilities and needs might be and where they might be leading. Speculating in antagonistic collaboration, How Soon is Now – initiated by Frank Barkow, Arno Brandlhuber and Sam Chermayeff – sets up a programme for the future.

As part of the exhibition programme, a series of talks with the participants of How Soon is Now and invited guests will take place every Wednesday at 6pm, beginning on the 17th of September and continuing through to the 29th of October.

Anticipating a near future of increasing material efficiencies, scarcities, and performances this prototype is a tessellated thicket. In this one-to-one scaled installation the boundaries between physical materiality and space-making are blurred where an ephemeral poché of bundled rods (wires) defines a series of spaces and passages between them. „Thicket“ also begs for a comparison between our artificially contrived one and those found in nature as in: to be lost in a thicket, a kind of labyrinth.

The bundles are self-stabilizing structures that define space and as a prototypical system it is infinitely configurable; the exhibition offers simply one such possibility. The logic of the prototype is an accumulating one where 2 mm × 2500 mm (super thin) rods are gathered and bundled to form a 8 x 8 cm cluster of four rods that add up 25 bundles (a component) that consists of 100 rods, and so on, generating a flexible matrix like a mosaic. The individual part, the 2 mm rod, is CNC bent in order to allow them to configure and combine with like (identical) rods. This is an existing ready-made technology to produce every-day objects like wire coat hangers.

The thicket is a research example of a new idea for a building block that is both latent and suggestive of endless possible configurations speculating on spaces where we might live and work.

Modified for HOW SOON IS NOW and based on the “housing subsidy provisions in Berlin in 2014 (WFB 2014)”, VierRichtungsModulDiagonal (FourDirectionalModule-Diagonal) is created through a volume of rope tensions by Brandlhuber+. The provisions of 2014 stipulated a flat module of 56.5 square meters. For the exhibition, the modules are turned against one another, so that they cross not perpendicularly, but diagonally, juxtaposed independently of the orientation of the plot itself. The “€6,50/m2-Apartment” illuminates the possibilities of an architecturally-challenging living and working space within a small space on two floors, for the rental price of a mere €6.50 per square meters. The principle was developed as a tool for sustainable construction.

The lamp is a prototype for a new lighting concept by Daniel Gogel as part of his planned transformation of the Luisenkirche in Charlottenburg The lamp was left behind in the planning stage of this prototype, without a source of energy, without light.

A loan from Karla Gogel-Pfefferkorn.

In November of 2011, the Studio for Experimental Design of the HFBK Hamburg began public design consultations in St. Pauli. Every Wednesday afternoon since then, they offer assistance in researching and solving everyday problems of the residents in the local community centre. People who otherwise could not afford to hire professional designers are supported to develop problems and investigate solution strategies in a collaborative design process. The approach of Öffentliche Gestaltungsberatung (Public Design Support) is to intervene in local processes by encouraging residents to take the initiative, in order to raise social and design issues and to work on them. The designers provide practical assistance for self-reliant action and promote the discussion of the development of collective claims and of alternative conceptions of urban life. The exhibition shows a tool of stackable elements – each representing a certain step in the communication and design process – used to document the status of collaborative design projects.

CHRISTOPH GENGNAGEL
Bend it, shape it!

Elastic bending as a simple shaping technology for complex geometries is a fascinating research topic in which both new and old worlds of rapidly deployable and flexible structures and spaces can be explored. One specific type of structure in this field is the elastic grid shell. The KET team is delving into this field in novel ways: form-finding and geometrical optimization, application of new materials such as fibre reinforced plastics (FRP) as well as innovative jointing systems and methods of construction using pneumatic formwork. The work is an example of ‘hybrid prototyping’ – a combination of digital and physical models allowing for a higher freedom in the design, development and realization of complex structures. The shown scaled physical prototype is a snapshot from the design development of a mobile shelter system for temporary use with a final span of 30 m.

The Interior I Like is a two-storey building with an unremarkable outer design. The structure, measuring 4 m × 3 m × 5 m, is erected by using steel studs for dry gypsum walls, a typical material often used for building interiors. On one façade, a functioning ventilation system that blows air inside is installed. Consequently, air is released through the skin of the façade, causing air to be circulated on the inside. Although no light shines from within, all four of the façades light up like standardised advertising billboards through spots installed in U-profiles.

A second work, Catastrophe Colours is a colour scheme presented in book form. It explores the way in which colours and their names are typically associated with a beautiful world and seeks to turn it upside down.

The tetrahedron with two appendages is made of a thin membrane developed for high performance sails. The material is reinforced by strands of teflon fibres laminated between layers of ultra light plastic foil. As such, the work can only support itself if fixed in a 90 degree corner of an external, solid form.

That was the idea: creating a minimal construction which is enabled, activated and hosted by an existing architectural structure. The work is highly simplified and abstract. It is not meant to resemble anything concrete. I think of it as larger than an object but smaller than a building.

J. MAYER H. WITH MARC KUSHNER
The Power of Beige

Colour in architecture is always an issue. From historically moral, political, and hygienic colours to the highly charged whiteness of modernism, colour has polarised architects for centuries. Only the natural expression of materials escapes the dilemma of colour, and there is only one colour that embodies the pleasant and non-disturbing qualities of nature: beige. The installation displays text, sculpture and found reference projects about a monochrome future.

The exhibition presents objects originally from the private home and office of Ludwig Leo, which were given to the former Bauhaus director Philipp Oswalt after his death. For Oswalt, the twisted, wooden, two-part, and therefore height-adjustable cones on which the industrially produced bed frame was established (Leo’s own bed and probably a guest bed) represents a throwback to the Co-op Zimmer (Co-op Room) by Hannes Mayer.

A loan of the Bauhaus Dessau Foundation; A special thanks for the generous support Dr. Claudia Perren, Director of the Foundation.

We are taken with the work of Group 2 from This Is Tomorrow. Both Richard Hamilton’s refusal to express tomorrow through ‘rigid formal concepts’ and his intent to develop our perceptive potentialities ‘to utilize the continual enrichment of visual material’ as well as John Voelker’s ‘To know this instant is proof of life.’ are key to us.

Being alive is an experience. Without perception there is no being. But in times of sensory and virtual overload not all perception results in a clear sense of existence. We extend John McHale’s mission to ‘underline the discrepancy between physical fact and perception of this fact’, differentiating between being and being here. Architecture has the capacity to root one’s presence in the present.

Since 1956 art has recovered a vitality that architecture cannot claim for itself. At the same time its erstwhile insistence in its autonomy has given way to tacit complicity with the financial markets, and now art seems to have lost the ambition to create ‘a total sense of environment’ as Richard Matthews observed. Intelligent interventions in the built environment with the ordinary citizen in mind have become the pursuit of a few endangered idealists – mostly architects. At the same time, the only way for architecture to be alive is in the creation of spaces that envelop and reunite us with our own existence. It is the sum of such individual experiences that – shared by many – notably distinguishes architecture from art.

Louisa Hutton and Matthias Sauerbruch
Team: Caroline Wolf, Sruti Thakrar, Walid Matar
sauerbruchhutton.com
With thanks to ZUMTOBEL and Brillux for their generous support.

SOMETHING FANTASTIC WITH FRIEDEMANN HECKEL
This Is Tomorrow (für einen Kopfarbeiter)

The objects of the installation represent the studio’s ideas of what tomorrow should be like. Basic statements that were first presented at one of the group’s early meetings, like ‘it will be painted,’ ‘it will be thin,’ ‘it will be heavy,’ ‘it will have a roof,’ and ‘not everything will be aligned,’ are now translated and combined into several objects that were especially made for the exhibition: A set of all-wooden table stands designed on the basis of the Cavalete, a lightweight foldable table popular with street vendors in Rio de Janeiro, a large diagonal curtain screen made from a common contemporary building material, and a number of small objects and prints, like a set of engraved water glasses by Friedemann Heckel. The overall installation can be read as a loosely defined, open working environment that displays Something Fantastic’s idea of not only a basic office space, but also one for an architect.