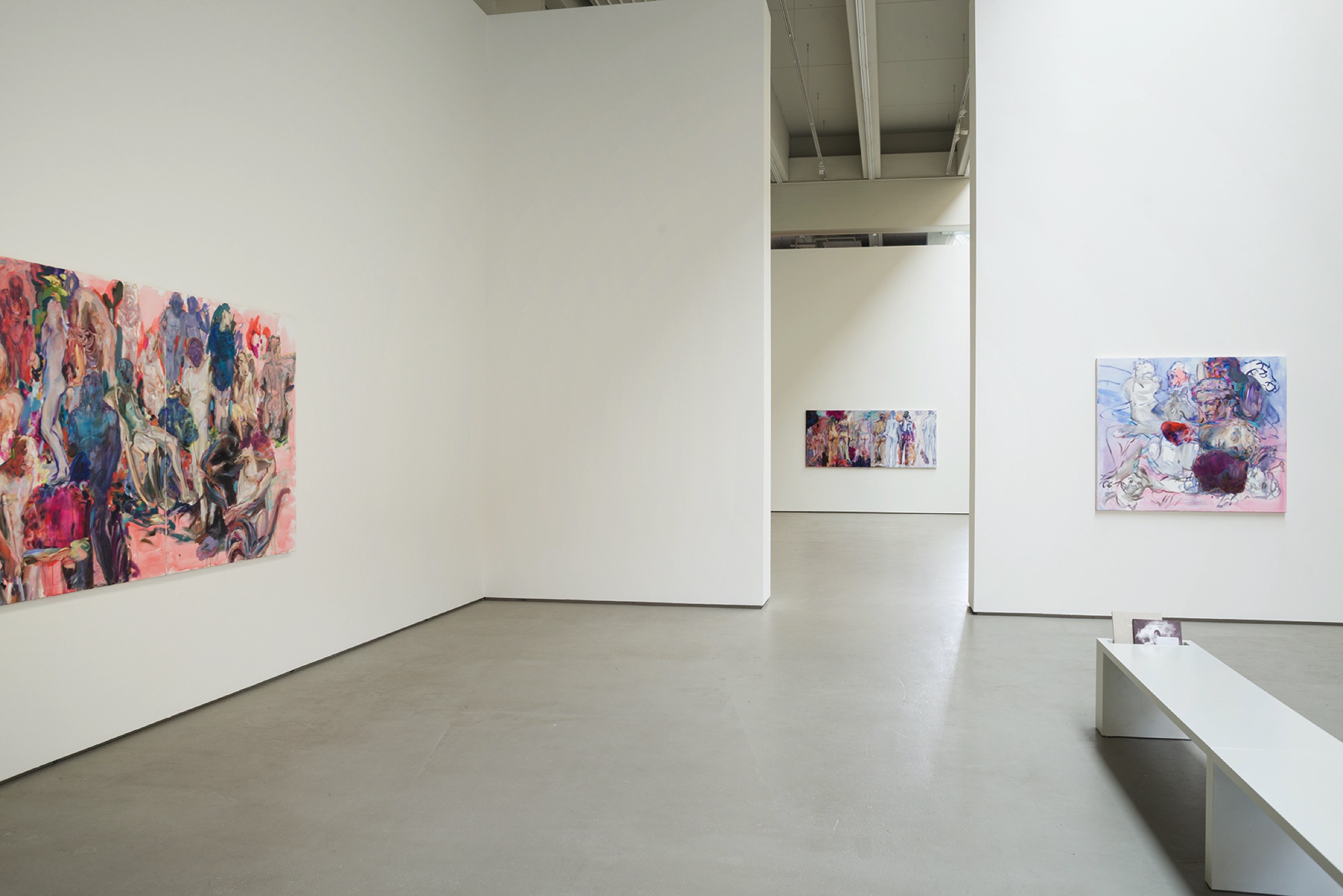 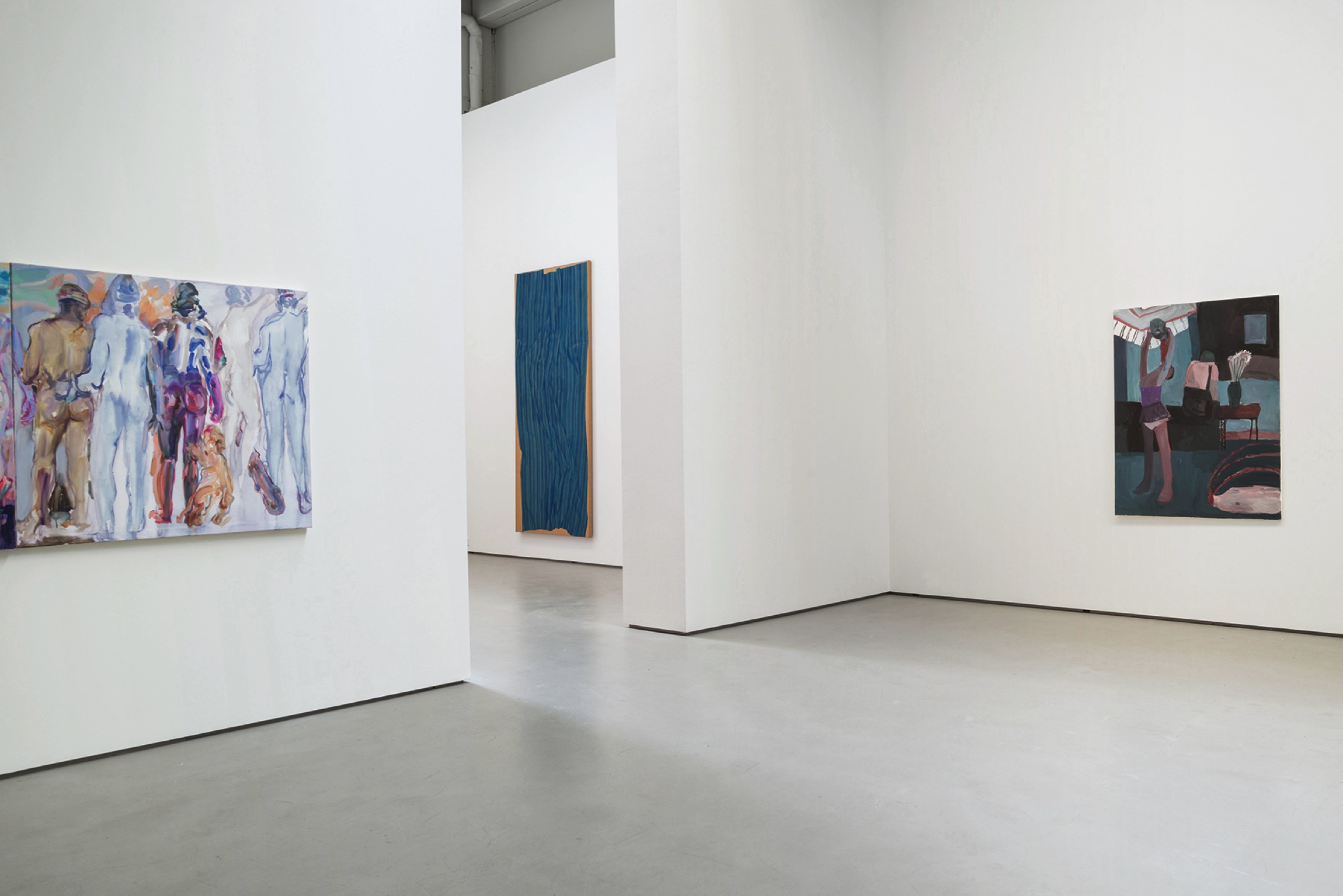 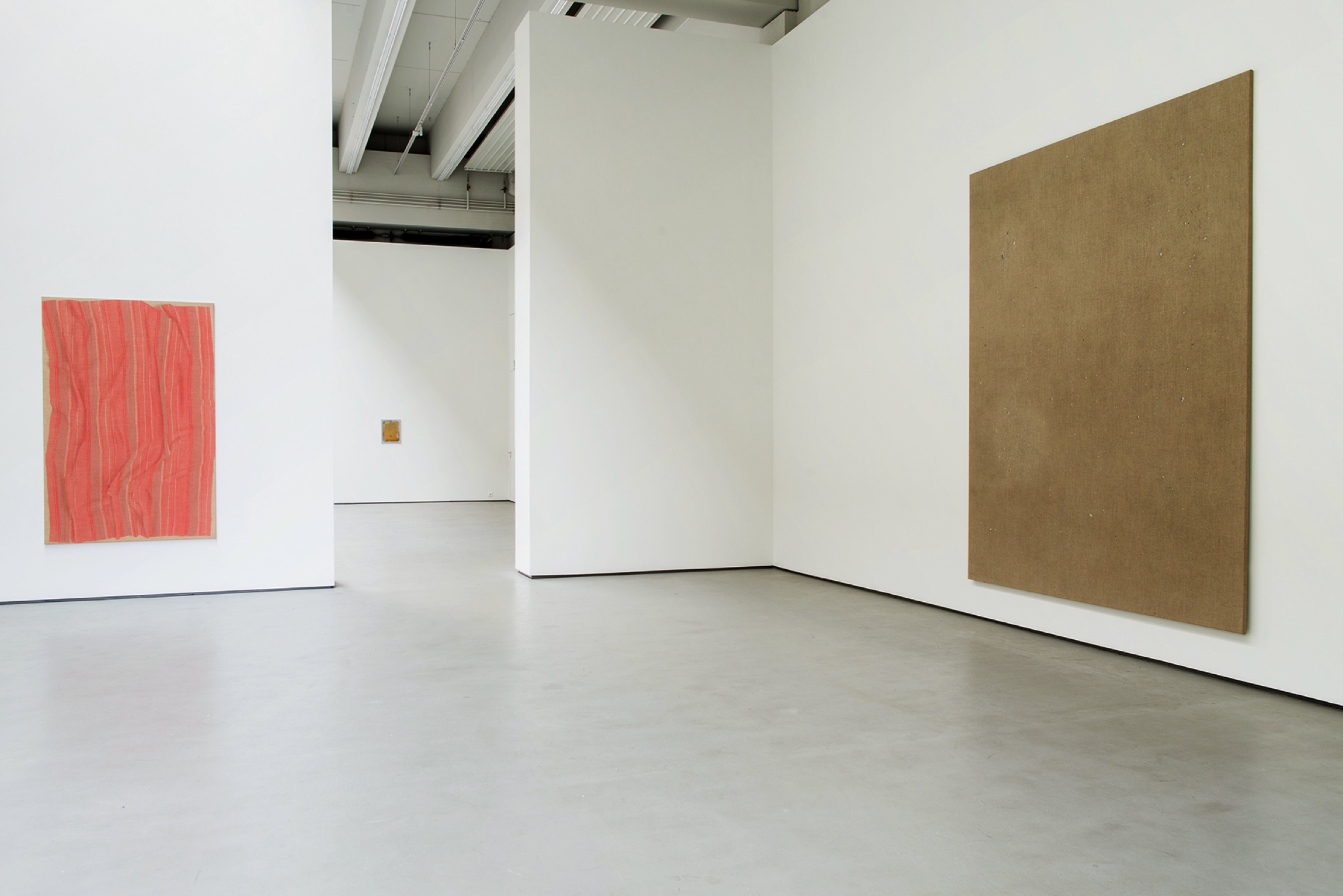 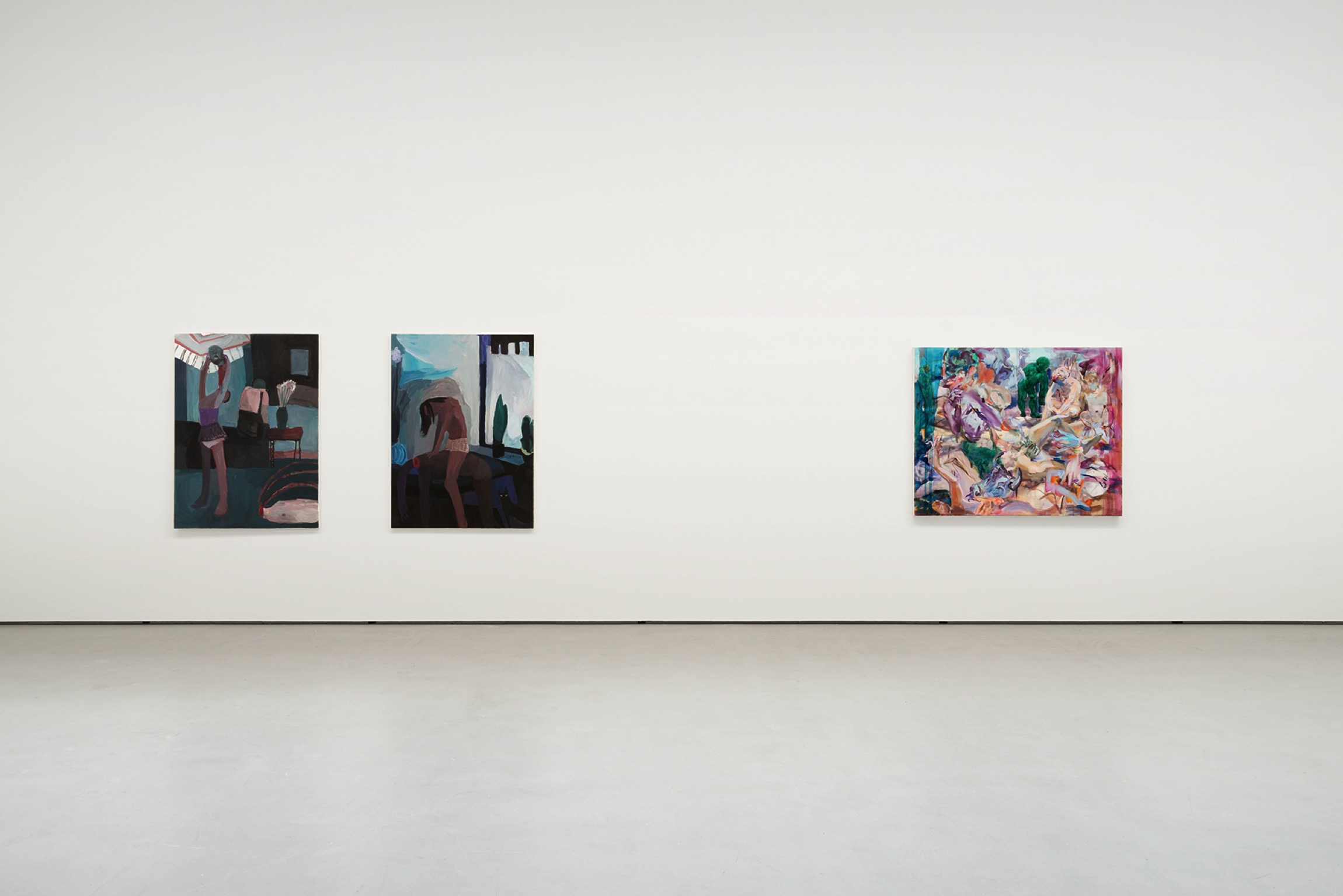 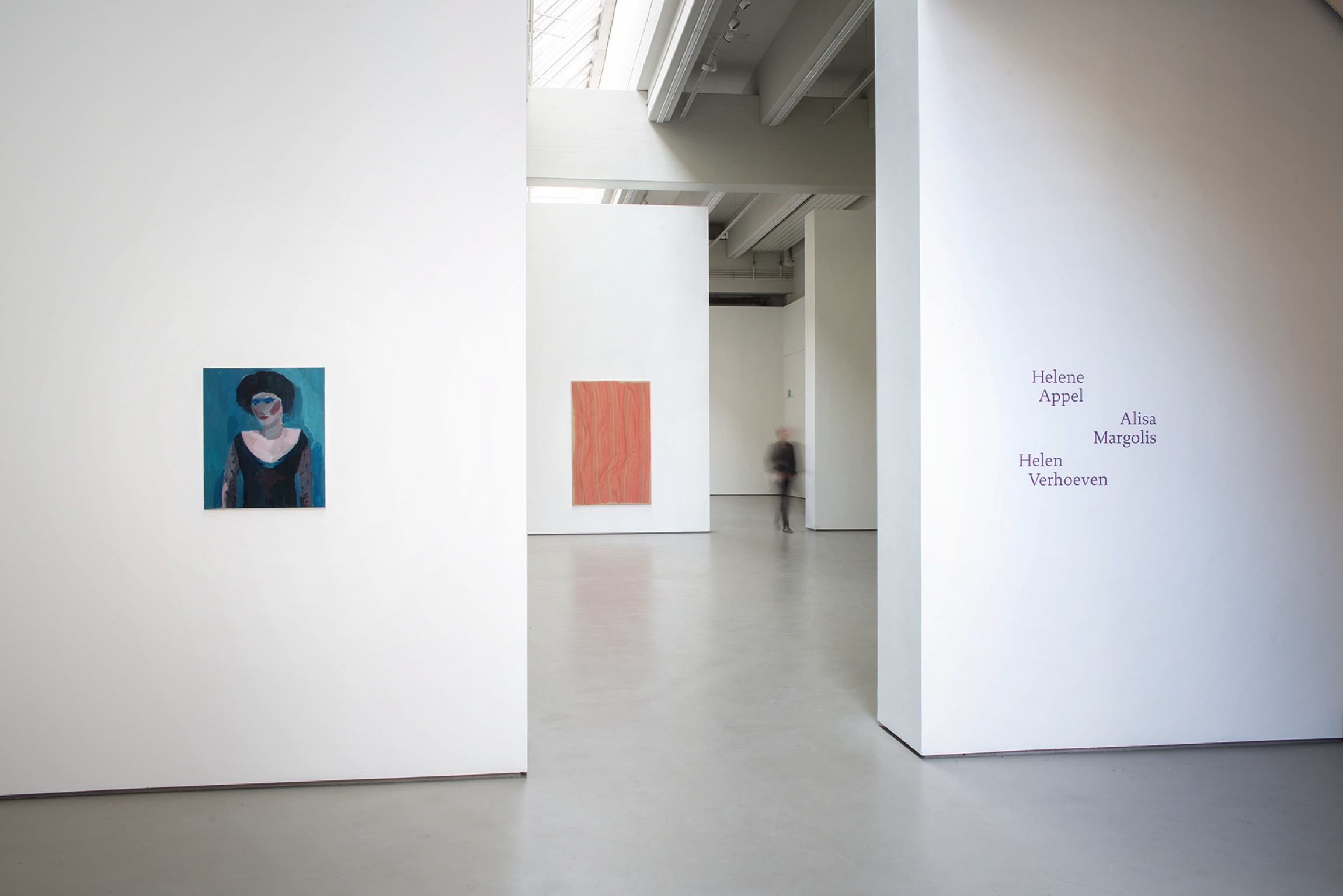 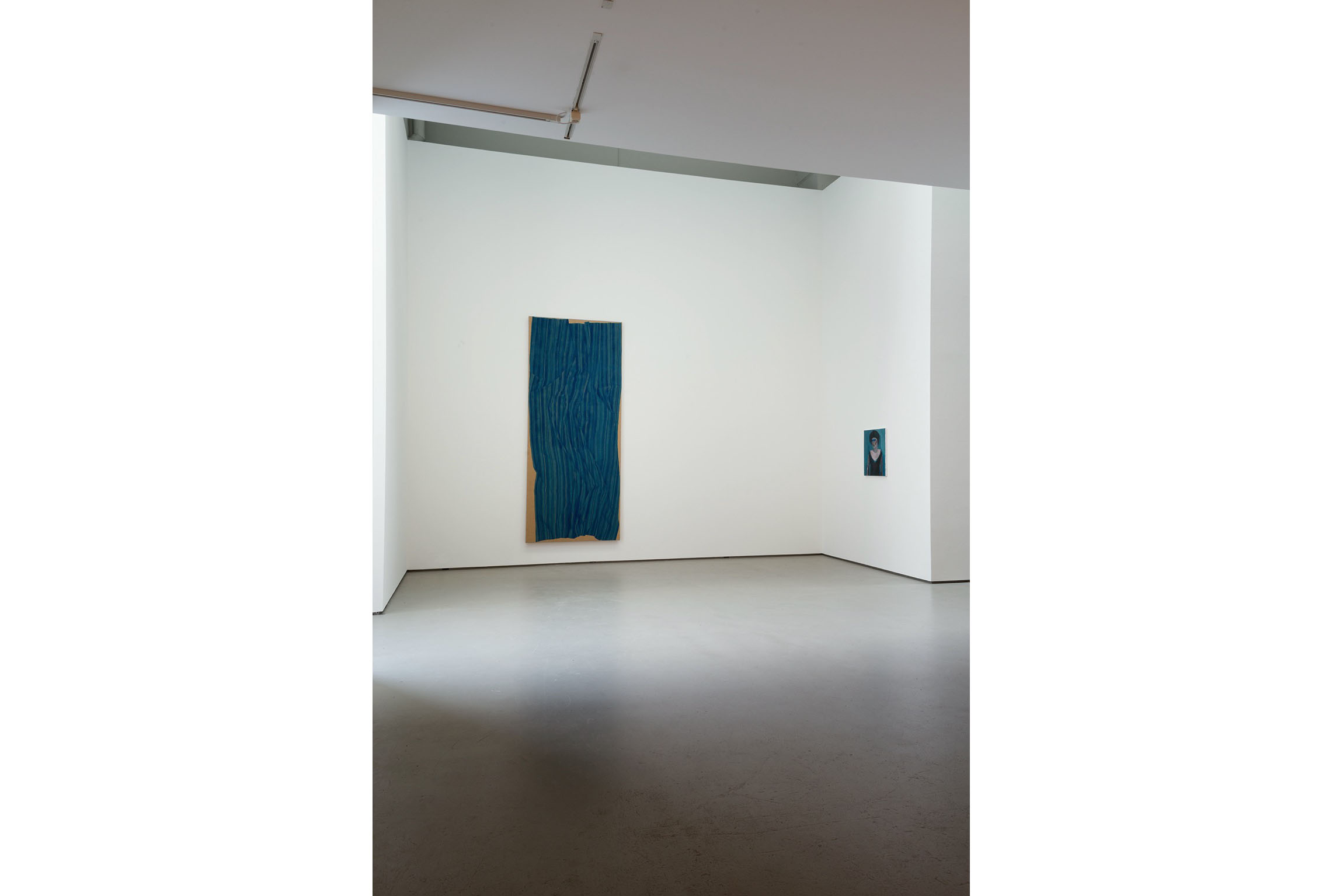 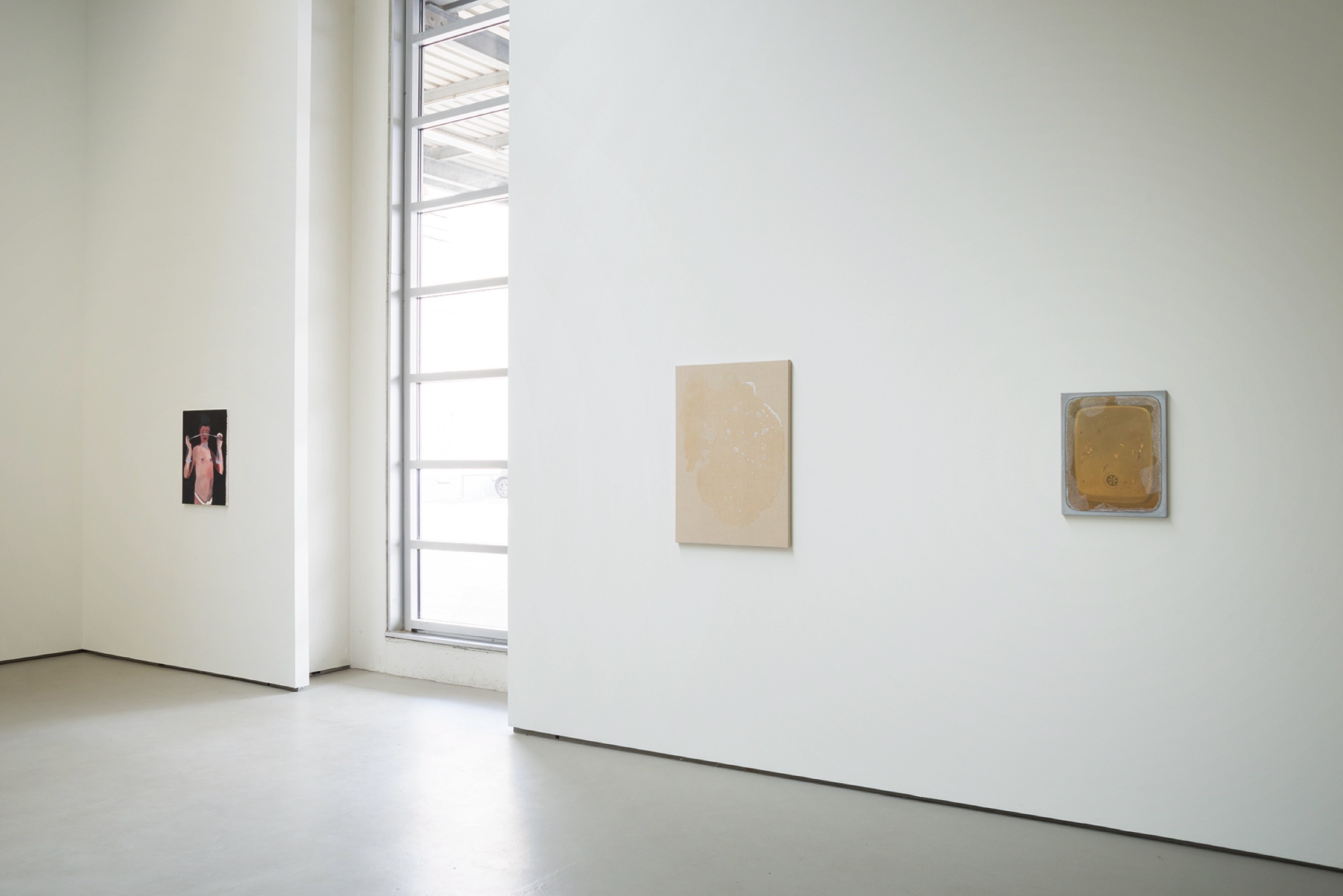 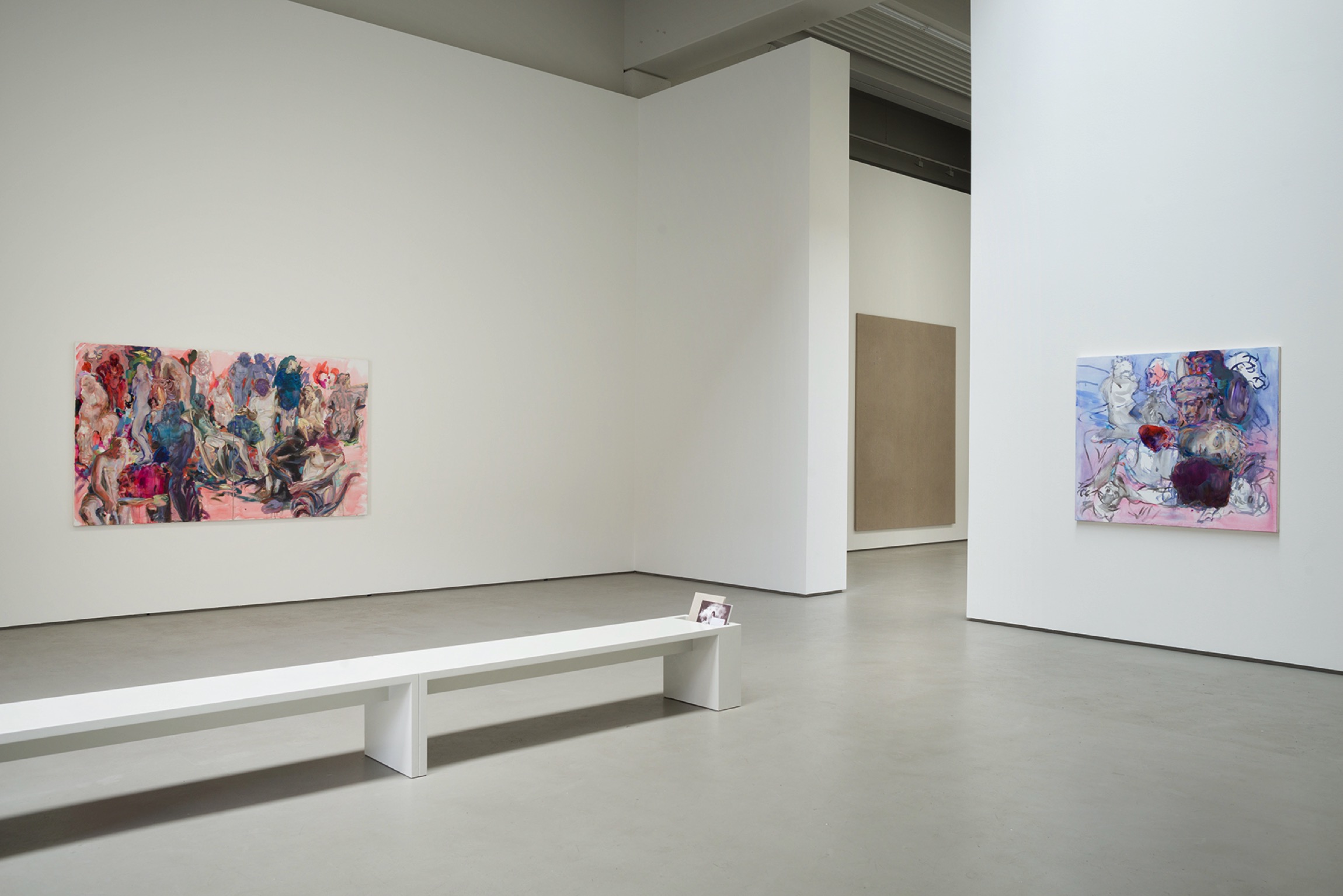 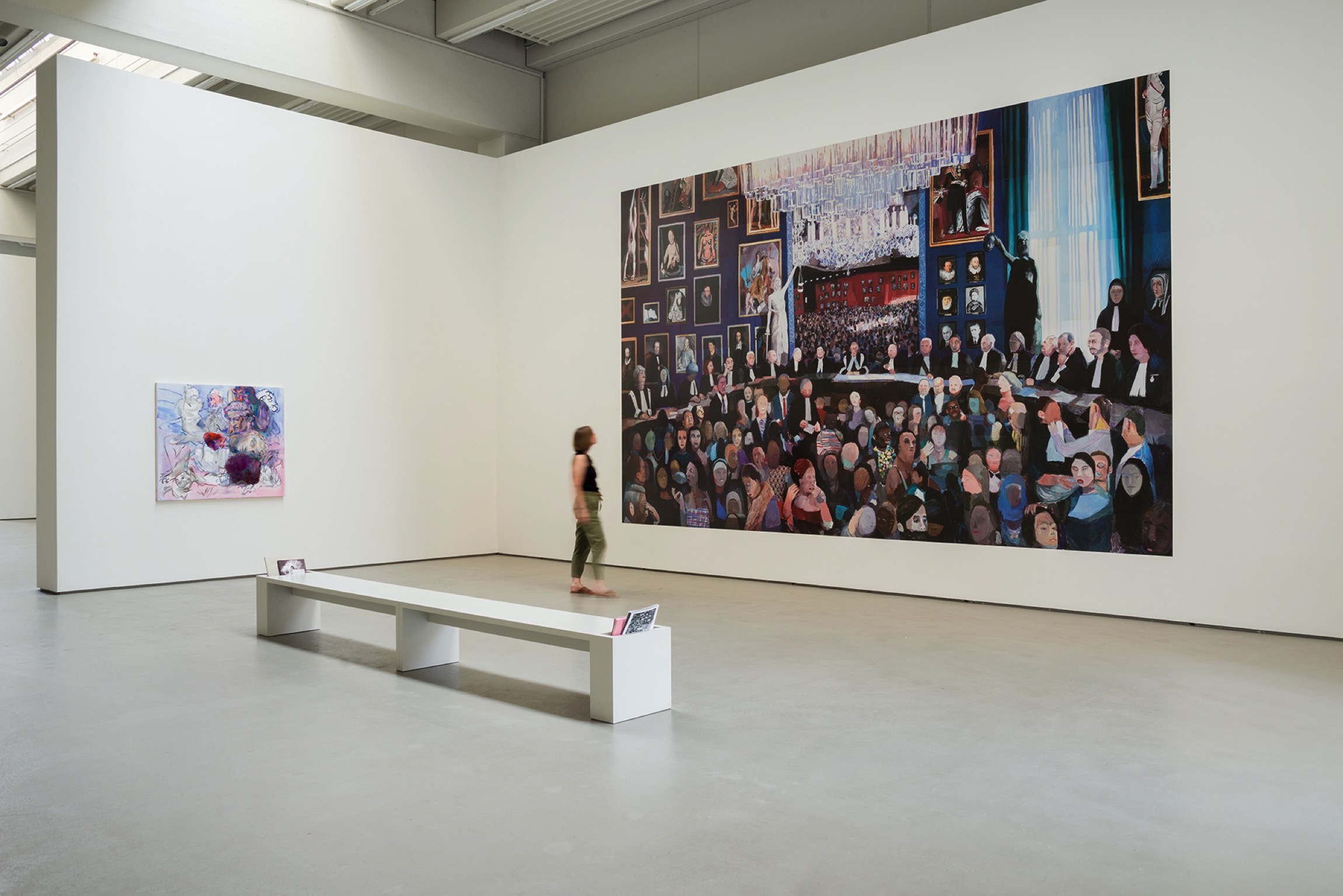 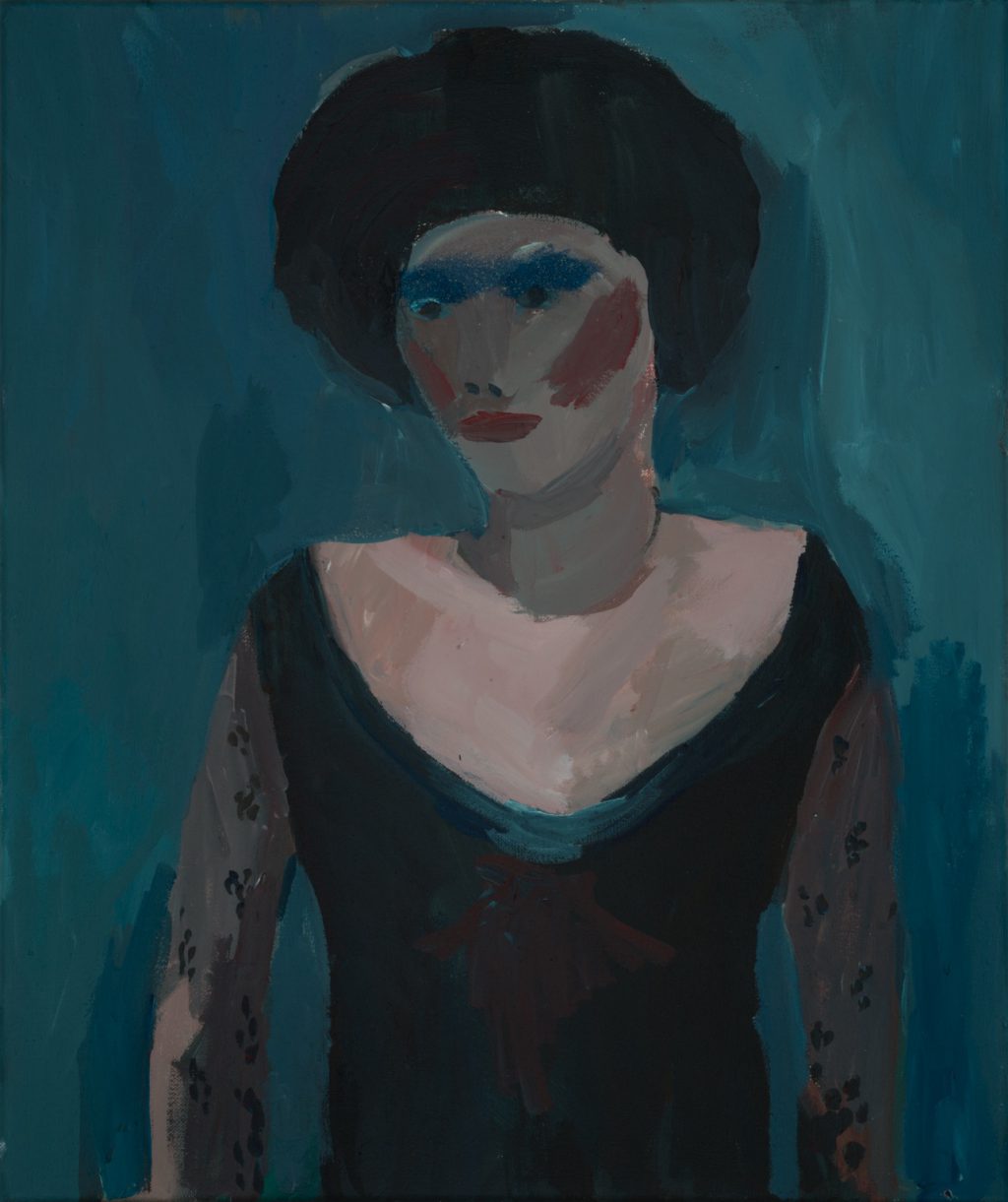 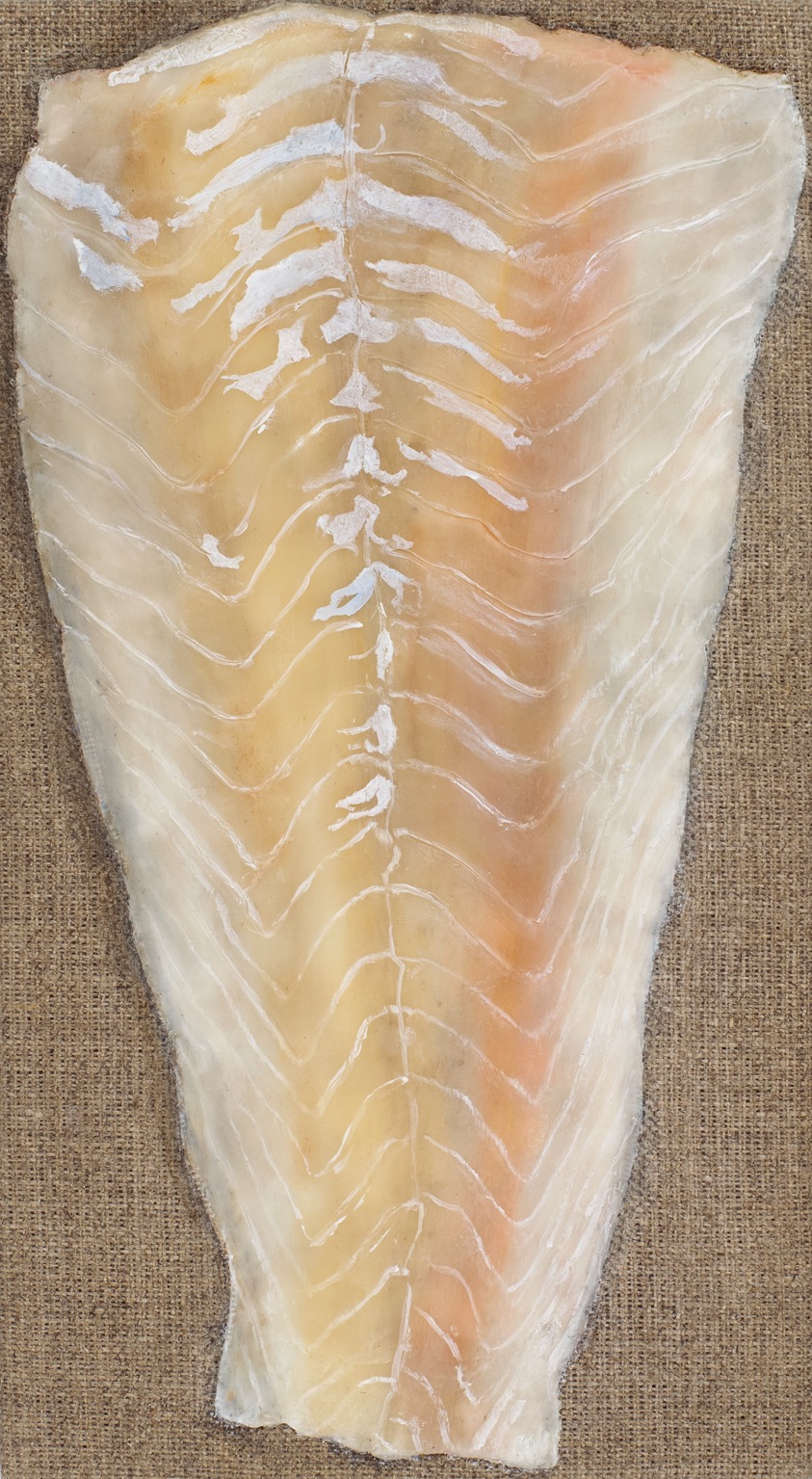 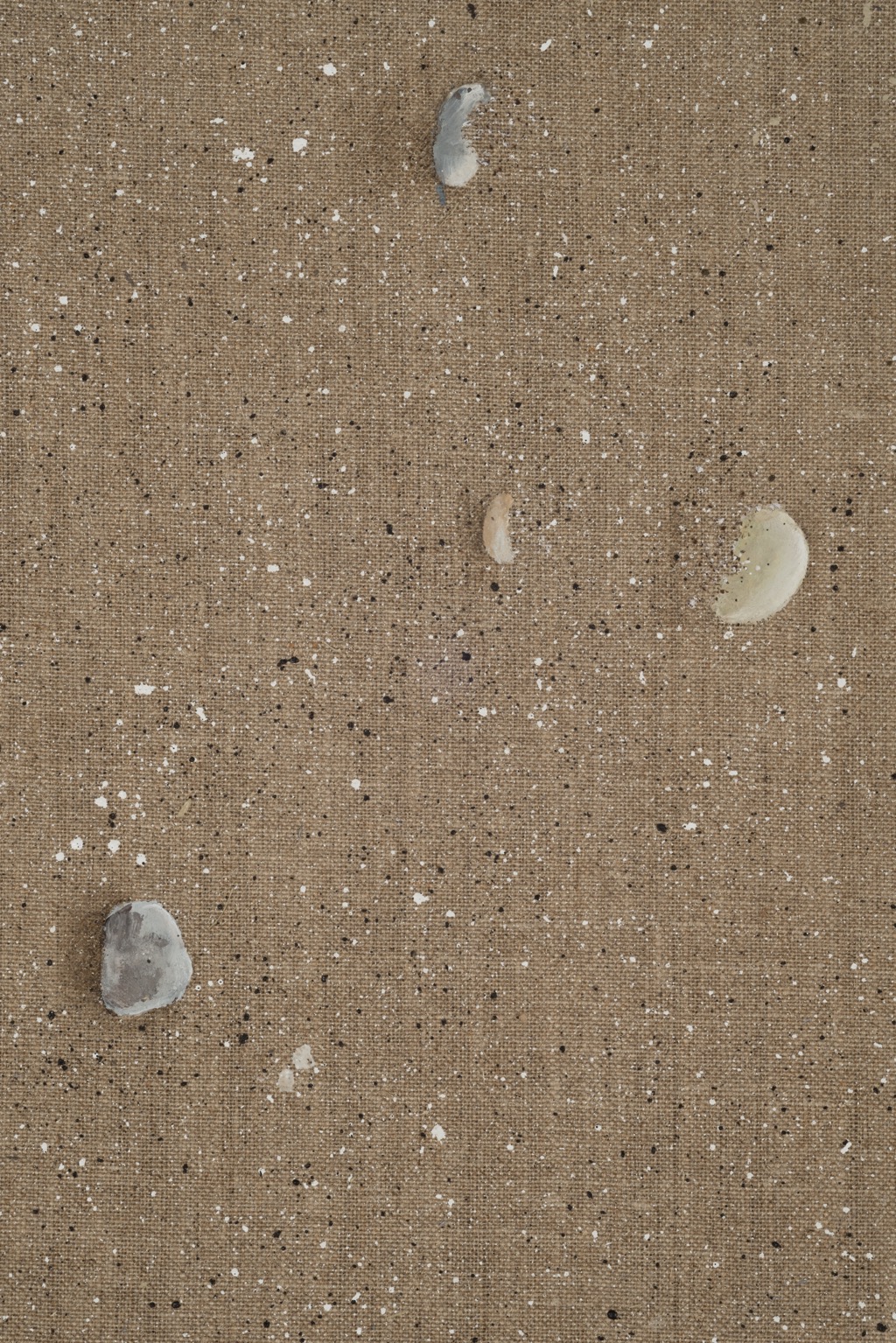 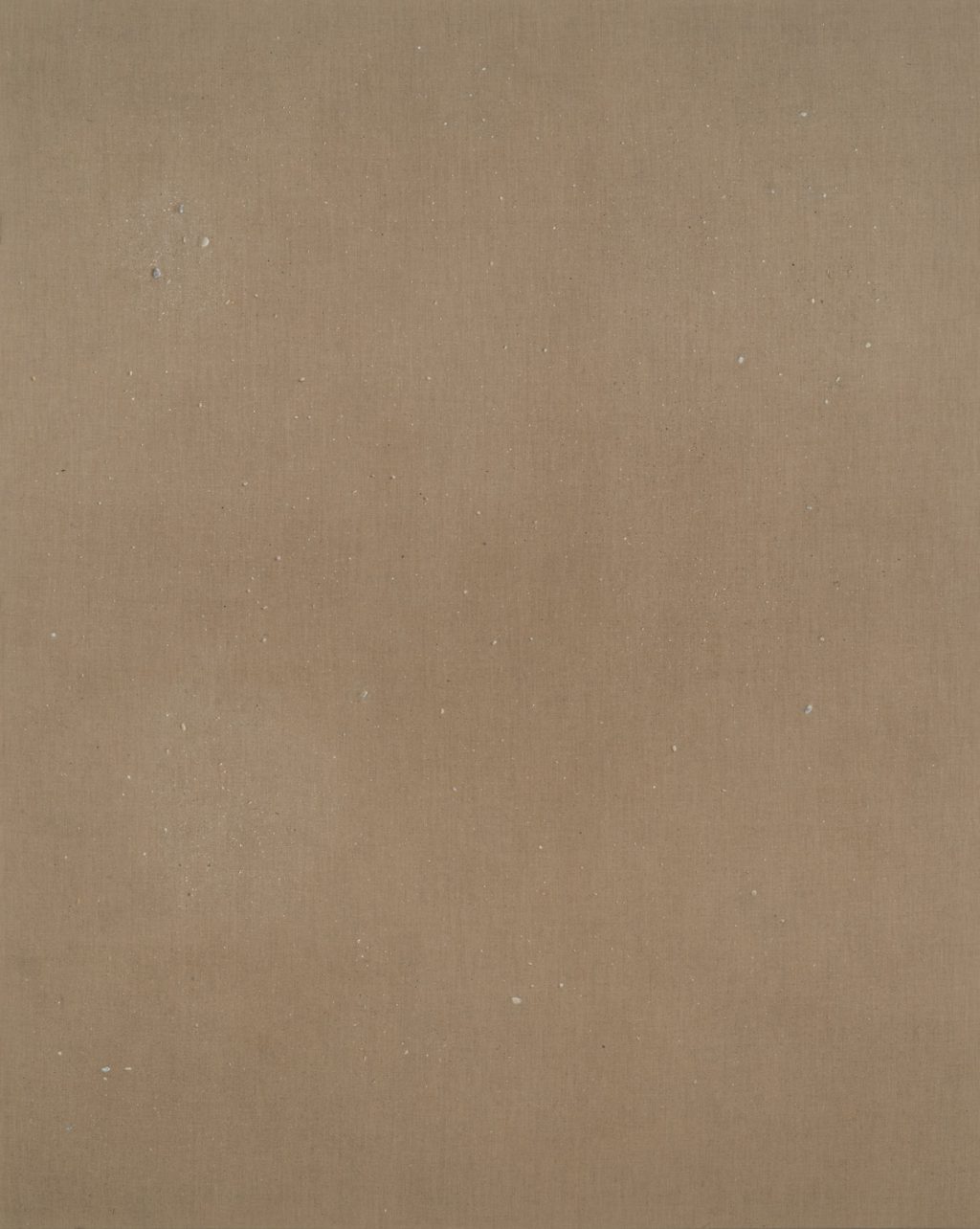 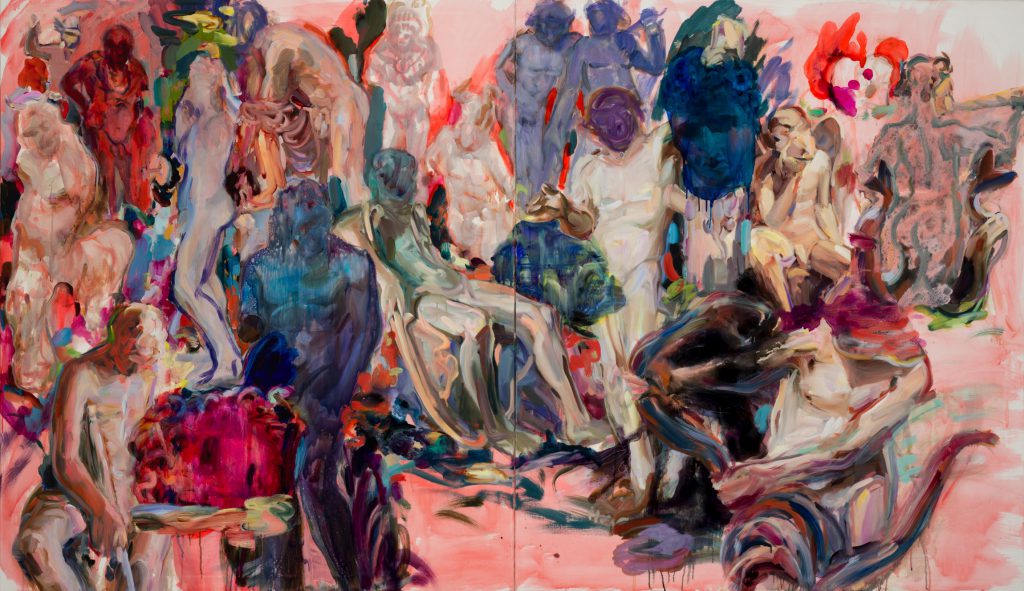 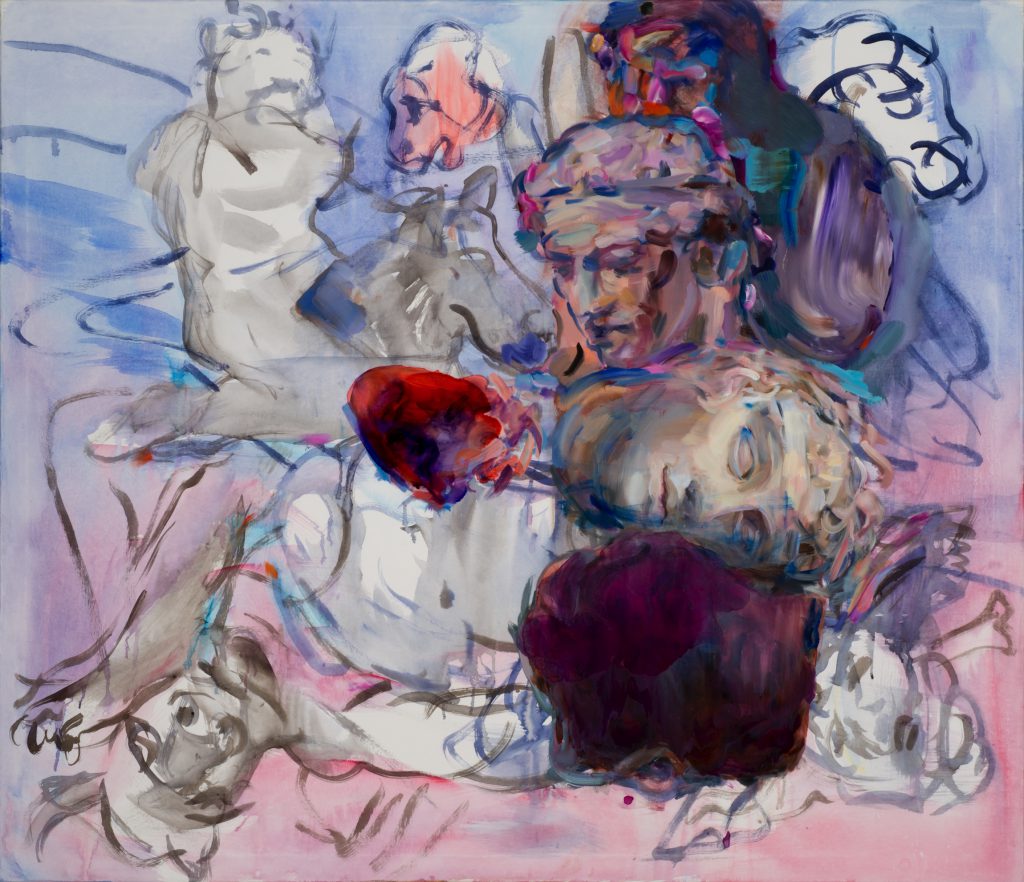 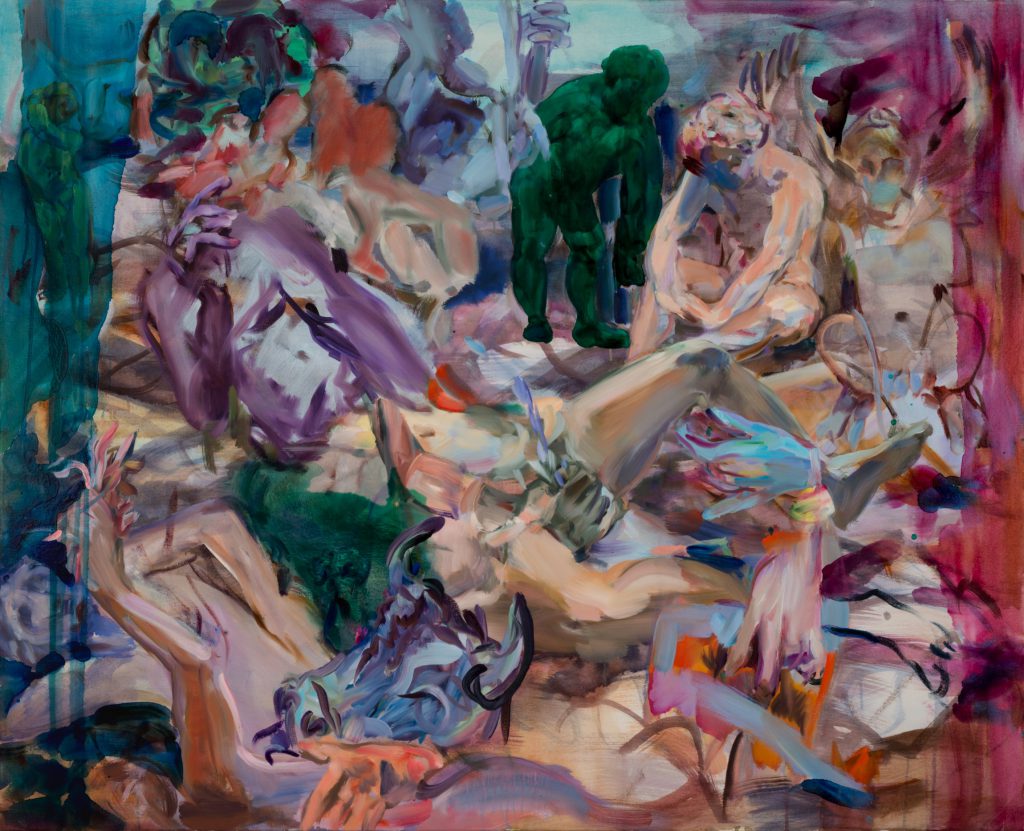 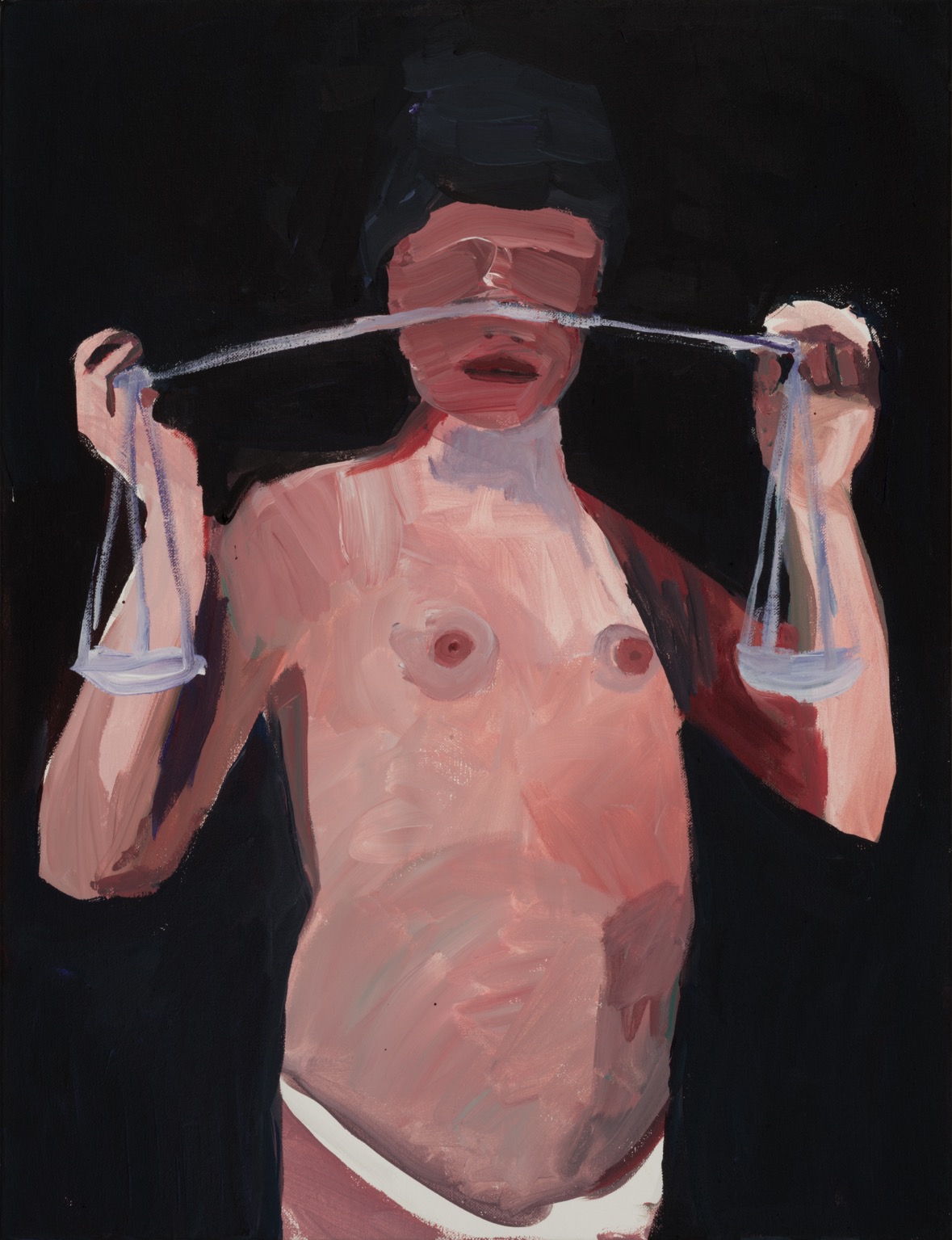 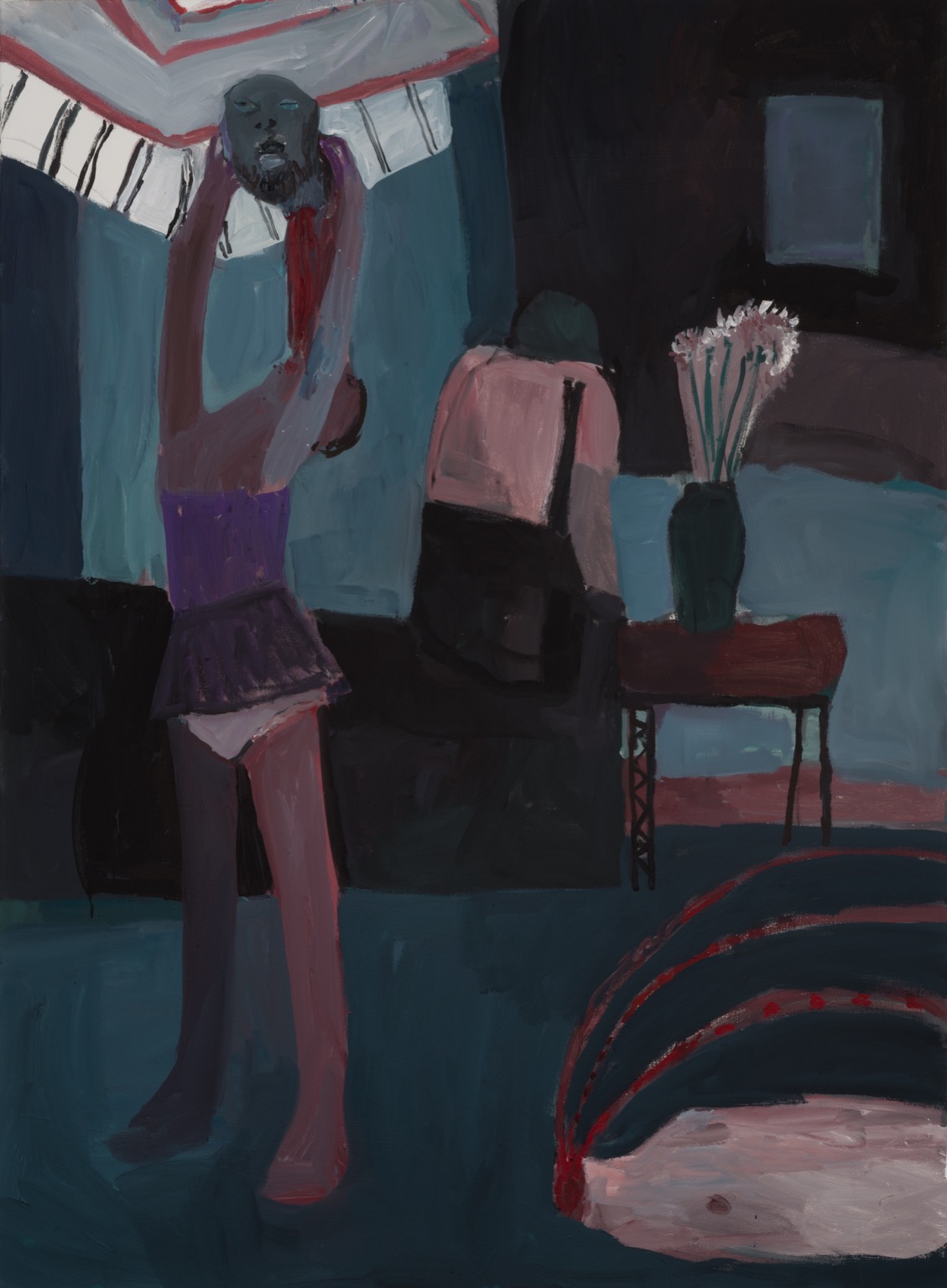 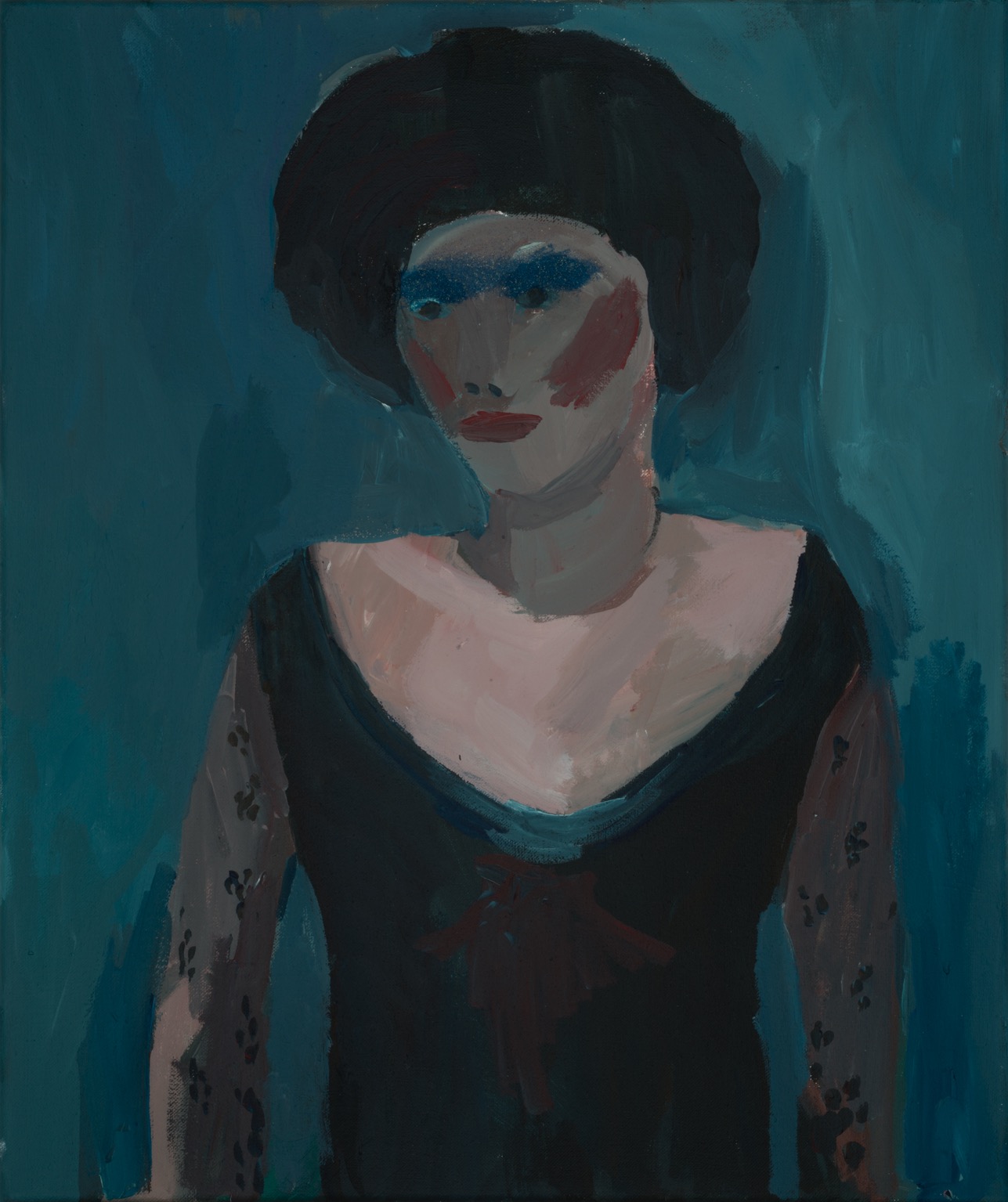 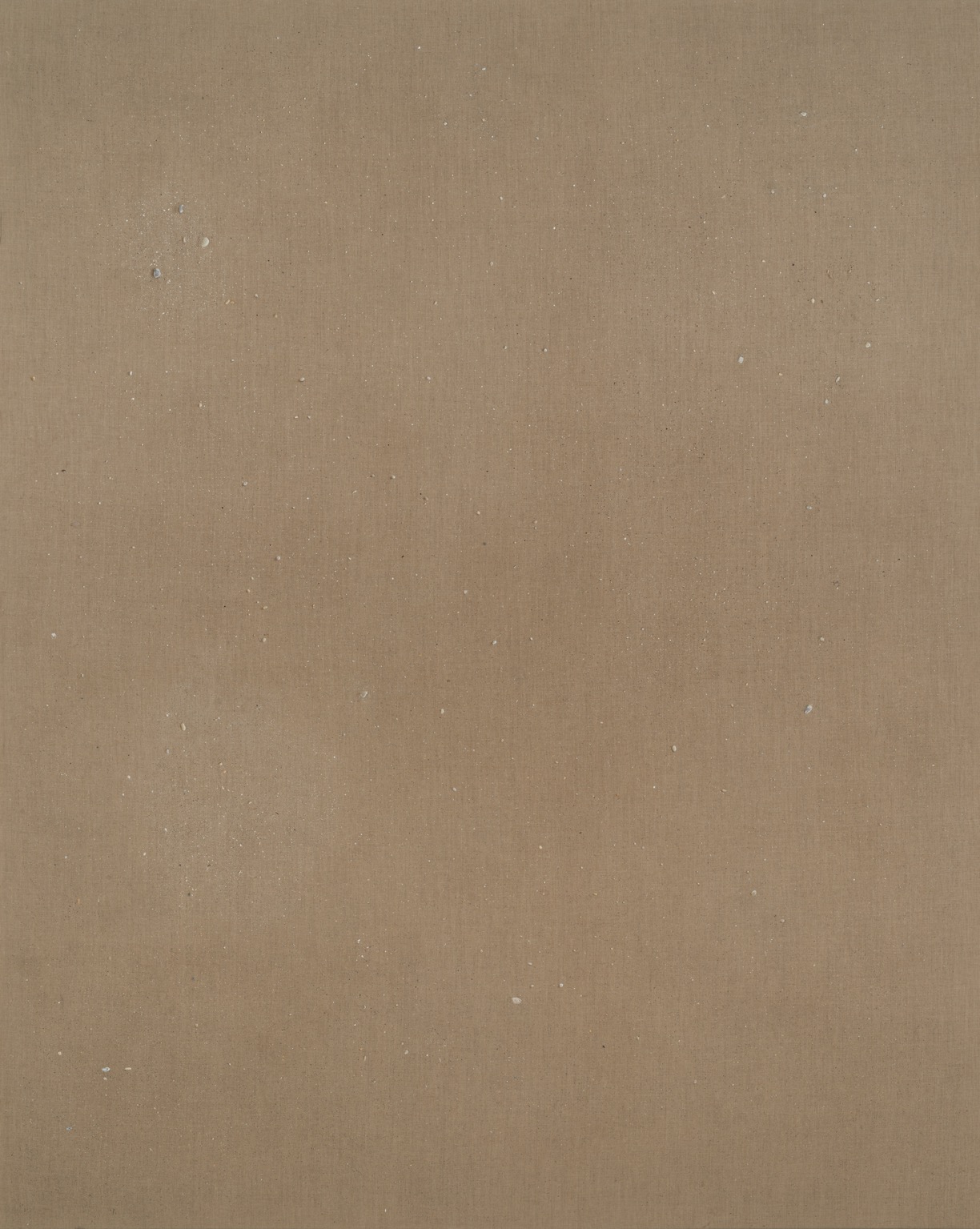 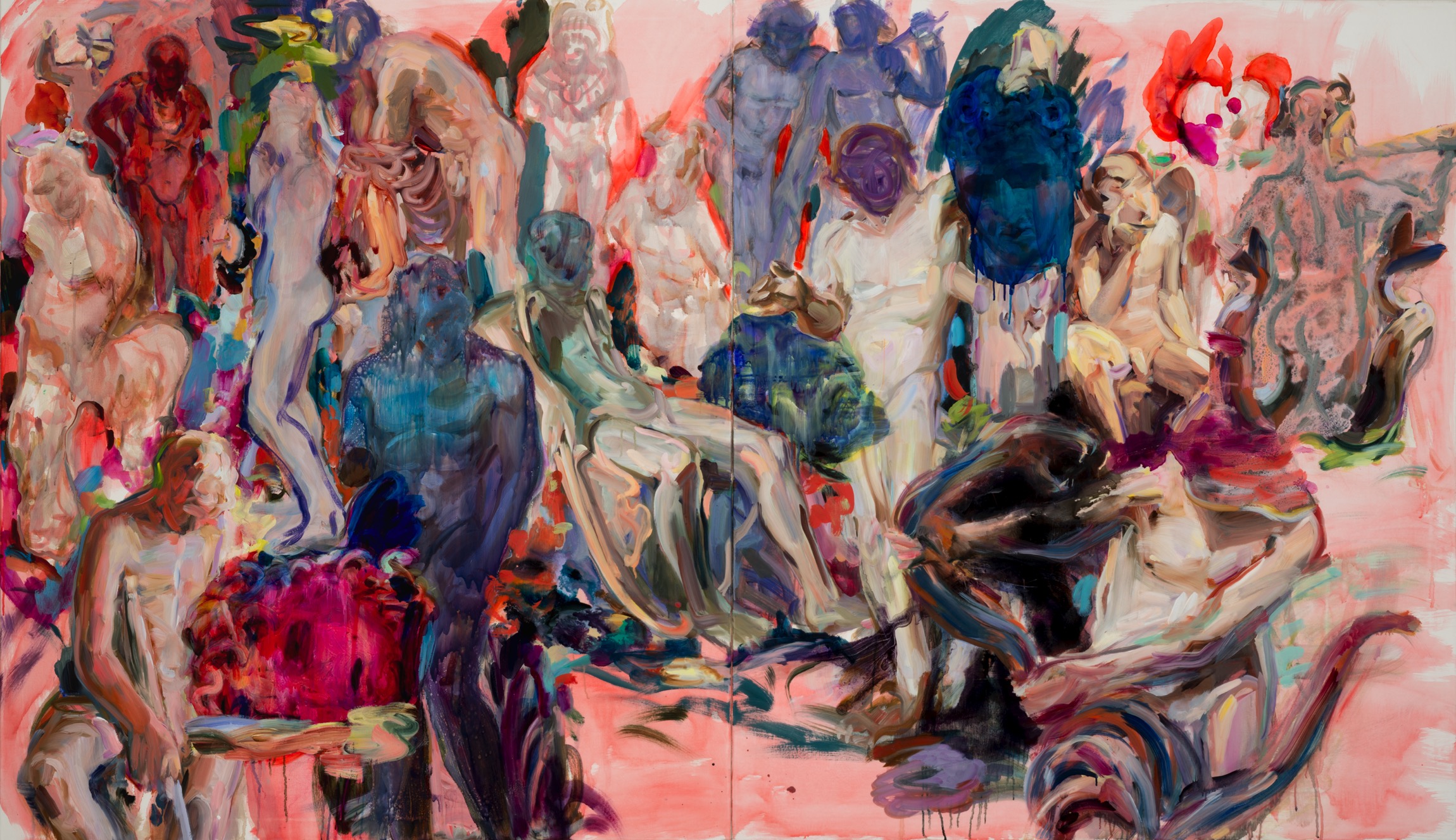 One must pluralize, refine, continuously

With its current exhibition, Galerie Judin presents a discourse of extraordinary depth in its display of works by Helene Appel, Alisa Margolis, and Helen Verhoeven. Together, these paintings offer a sustained meditation on questions of figuration and representation; each of them toys with the centralizing narratives of history and genre, arresting our sense of certainty about what we see and what we understand to be true about the world and its descriptions, taking us from high to low, and deep into the granular level of things. On the gallery’s walls we are confronted with residues, ruins, traces, disappearances, and spectral and sublime reconfigurations; with intrepid interplays of scale; with classical bodies that float across the picture plane like displaced signifiers, creating a beautiful sense of absurdity; with a host of severed heads, former icons that are now obsolescent; with muses, medusas, and furies—symbols of muted, incomplete justice or its bloody return; or with the detailed minutiae of sand, water, meat, and stones, observed with microscopic intensity and depicted with precise, forensic introspection. Each of these studied observations leaves an unmistakable trace of the uncertain, and in so doing achieves the profound effect of heterotopic thought in action. The paintings featured in this exhibition allow us to witness the intricate turn of representation back onto itself, to observe the migration of things, of figures and objects, as they are skillfully liberated from their customary functions through a kind of Warholian repetition of the image—subtle acts of reconstitution of the everyday into the epic or transcendent, yet on the modest scale of daily life.

Appel, Margolis, and Verhoeven focus on the craft aspect of daily practice, on the rituals of habitual process and the interior life of painting, and this provides another register in which their shared discourse unfolds. If it can be said that the works on display together pose a unifying question—namely, what it means to be a figurative painter today, directly confronting the laden issues of representation and verisimilitude—their responses are nonetheless thrillingly divergent. Foundational to all three artists is the device of the recursive sequence, the subject whose essence is altered dramatically through the mise-en-abyme act of its multiplication or, in the case of Appel’s work, its repeated illusionistic reproduction. We have before us a beautiful riot scene of accumulations, walking a tightrope between realism and abstraction, between presence and absence, between the reverent analytic and the base sublime.

Appel’s work unfolds in a minor register, at 1:1 scale. In these paintings, each of them life-size depictions, she presents us with meticulously rendered illustrations of the interaction between the subject as pure sign and the subtle abstractions, or refinements—the shifts in its essence—that occur in the process of its painterly depiction. Appel’s subjects are the overlooked and humble objects of daily life: linen, sand, meat, water, plastic, and stone. Through a process of repeated distillations, her paintings take us deep into the mysterious material realities of these things. These simple, scrutinized objects and their surface representations become increasingly stripped of affect, almost dematerialized. Her method refuses easy access to tactility, that common conductor of experience. Yet remarkably, we discover that in the extracted and bare essence of her subjects—in their base, abstracted state—they achieve a kind of exalted, sublime power: a cut of meat becomes a relic; an array of stones or sheath of plastic is made almost holy in its ability to communicate through near-abstraction or transfiguration. Her images, then, hover symbolically between the figurative and the non-figurative, a result of her penetrating inquiry into her subjects’ conditions of existence, and what these subjects can be seen to represent in their material absence.

In making visible this elusive interplay between the subject and its planar representation, Appel’s paintings reveal the apparatus of the artwork in its most elemental form. Her work speaks directly to the sometimes difficult negotiation between the support or armature of the painting, and the application of effect. With her penetrating, forensic gaze, Appel situates this interplay between two competing states: between the detectible residue of the canvas in its raw, untreated form, and the delicate, patterned filaments of the image—painted particles of sand, ligaments of flesh hewed to the bone, water as it spreads slowly across a surface. This tension, so faithfully evoked, serves to decontaminate the idea of pure, one-to-one trompe l’oeil illusionism, drawing us ever further into her transformative world of shifting truths. Appel, like Margolis, plays expertly with the genre of still life and its detailed exposure, its calculated dissection of the object. In the hands of these artists, the genre is tranformed, its ability to speak heightened; it becomes resituated as a medium of philosophical speculation.

This exhibition marks a subtle shift in Margolis’s practice, as she further abstracts the recursive applications of decorative craft elements in her paintings. Here she maintains her meditations on the human scale or in the minor register (like Appel’s everyday objects) as a way into the transcendent or sublime, subversively approaching painting, as it were, from the wrong angle: through the repetitive markings or iterations that belong more formally to craft technique. Related to this, and forming a link with her previous work—deeply evocative and abstracted still lifes that read like bleeding arabesques of matter in cosmic motion—are her sustained interests in the decorative heritage of the Baroque and the studied illusionism of still life painting. The work displays Margolis’s fascination with what might be termed the Ur-image and the venerated role it has played in aesthetic and moral discourse through the centuries, from the sacred place it was afforded in classical mythology to its unifying position in the iconography of modern fairy tales. Her perversions of these foundational signifiers and their centralizing tropes saturate the work on display.

Margolis takes the process of the recursive image and anchors it to a broader concept of practice that she has described as “endless painting”: the notion of the constantly unfolding narrative, the accumulation of mark making as a new path to the epic or the divine. This is a critical theme that unites her work across the years. Her paintings forge surprising connections to the tradition of modernism, specifically to Abstract Expressionism and its assertive claims to the sublime (think the color fields of Barnett Newman). Uneasy with such unquestioned entitlement to the grand scale, Margolis opens a new and subversive path to the transcendent—from below, through a process of daily making, mark upon mark. Margolis’s work, like Verhoeven’s, performs subtly powerful acts of blasphemy; it demystifies canonical ideals and their deep hold on the structures of modern thought. Her paintings depict the most venerated images of classical antiquity, painted with brilliant technical skill, but leaves them adrift in aimless, absurd uselessness, liberated from the yoke of traditional ideals of masculinity, power, and beauty yet still, amidst the wreckage, reconfigurable. Forced into modernity, floating, exposed, they enter our own messy, contradictory physical world simply as a collection of guys on the move—absurd, sublime, but somehow also fully present (if fundamentally altered) in their antique form. These interventions by Margolis, like those of Verhoeven, hint at a method of historical transfiguration, what Walter Benjamin called “the tiger’s leap into the past”—a sudden, bold movement into the “open air of history.” That Margolis does this through a process she calls minor mark making is all the more striking. Much like her earlier work, her recent paintings are arresting in their compositional ambiguity; figures bleed into one another and appear in their repetition to disintegrate into some greater but more uncertain whole. The ambiguity is disconcerting, but one experiences it, above all, as an opening, a possibility.

Verhoeven, too, treats the figure recursively, as a thing in endless repetition; it is a banal assembly of parts but with an intrinsic, already unfixed mutability. In Verhoeven’s paintings the subject hovers, portentously, threateningly, on the edge of total transposition. One thing threatens to become another, leaving the viewer expectant, fearful, roused. Verhoeven’s paintings concentrate the mind. The spectator, like her subjects, becomes unmoored in her clever and provocative plays of representation. The grand reconstruction she has devised for this exhibition of her 2015 painting Hoge Raad, which depicts the densely crowded interior of Holland’s Supreme Court (where the painting is hung and thus rarely seen in person), performs a profound act of uncertain, ambiguous return, repeating the motifs of recursiveness and distilled, secondary representation that so animate the work of Appel and Margolis. Her replication of the painting leaf by leaf from the more widely accessible book format sees her revisiting and perhaps altering one of the critical themes of the original work. In reconstructing the painting for us, Verhoeven brings forth another powerful aspect of the body politic and the play of representation (political and otherwise) that lie at the heart of the Hoge Raad.

Verhoeven’s oeuvre, as compellingly illustrated in the paintings on display here, is populated with specters of violence and desire, transcendence and subjugation, malice and aggression, suffering, forgiveness, guilt, and absolution. In an interview with the Dutch writer and poet Maria Barnas, Verhoeven underscored her fixation on the violent extremes and contradictions of human experience, and on “our capacity to live with such ruthless discrepancies.” Like Margolis, Verhoeven confronts the complex, layered iconographies of her subjects with a concentrated, penetrating intensity; the effect is a series of stunning revelations. Verhoeven’s paintings reveal what discourse buries or disguises, what it overdetermines and burdens, what it misrecognizes, or resists. It could be said that she makes visible what is repressed or omitted in the stories we tell about ourselves—about culture and history, about politics and its institutions, love and death. Verhoeven’s acts of erasure, alteration, or displacement suspend our sense of order in the world, the relation of things to one another, the web of significations we are wrapped in. Margolis similarly troubles, or disenchants, our faith in history’s narratives, offering in place of our former convictions a thrillingly new experience of the world, which can strike like a Damascene conversion, in all its sublime incarnations.

Both Margolis and Verhoeven play with this disruption of symbolic regimes, generating tension in the cyclical choreographies of their compositions and producing, as Appel does, a kind of generative grammar all their own, one that refuses in very subtle ways the simple machinery of illusionism, even as they continue to mobilize it. The aim of these artists, then—seen together here for the first time—is not, to borrow from Gilles Deleuze and Claire Parnet, “to rediscover the eternal or universal”; the goal is not to answer questions but to pose them, to pull assertively at the center; not to conclude but rather “to find the conditions under which something new is produced,” to free thought and creative expression, to free painting itself from any sense of completion or fealty to the grand gesture. Like a series of archaeological speculations, produced from teeming accumulations of history and matter, the paintings on view at Galerie Judin were created from fragments either banal or overlooked; forgotten, unseen, or hidden; overdetermined or narrowly historicized. Perhaps most importantly, and most powerfully, Appel, Margolis, and Verhoeven present us with images that are themselves propositions on the subjects of representation and process; each of their paintings—in their infinite reconfigurations and irreverent arguments—offers wholly transformative models of practice.