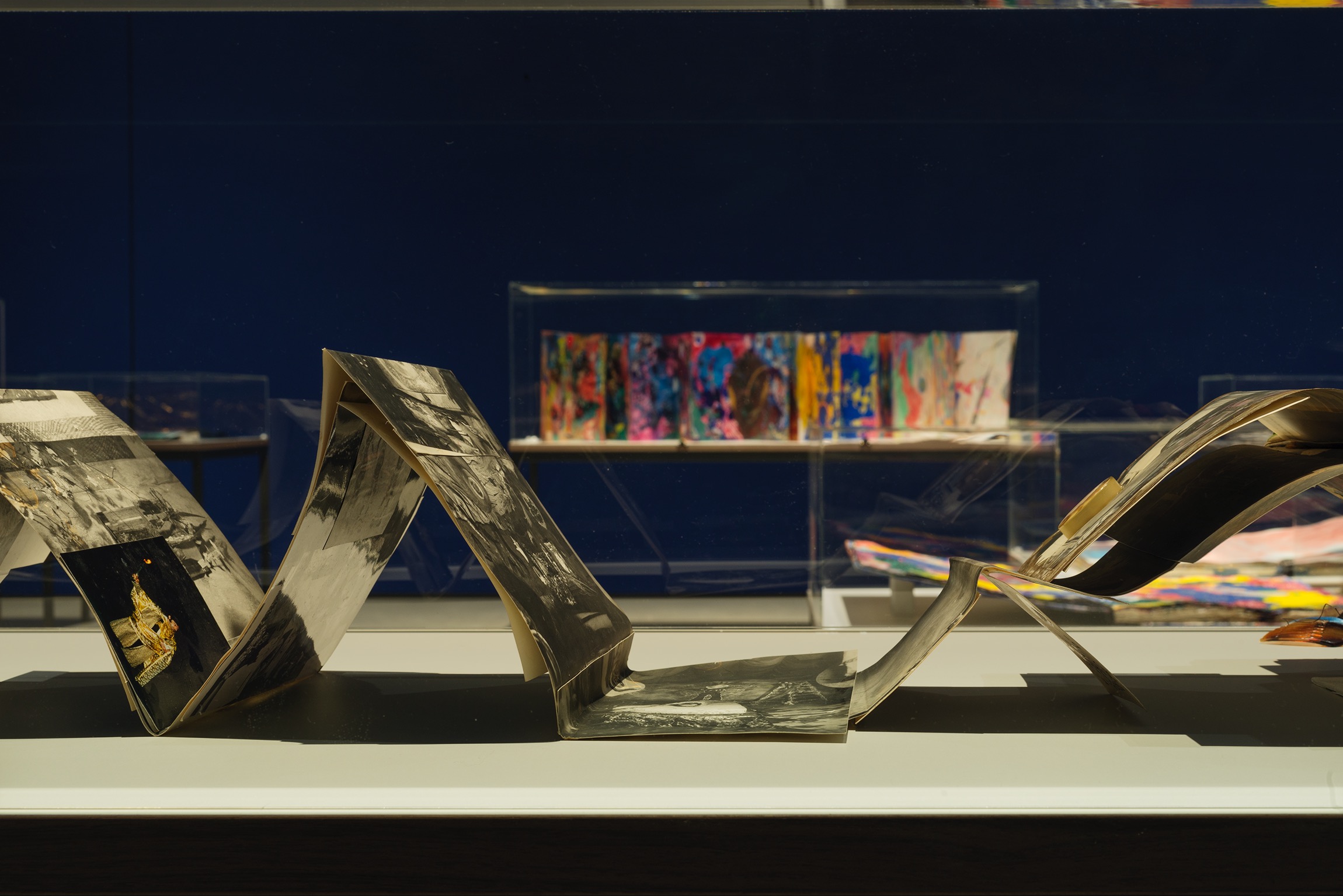 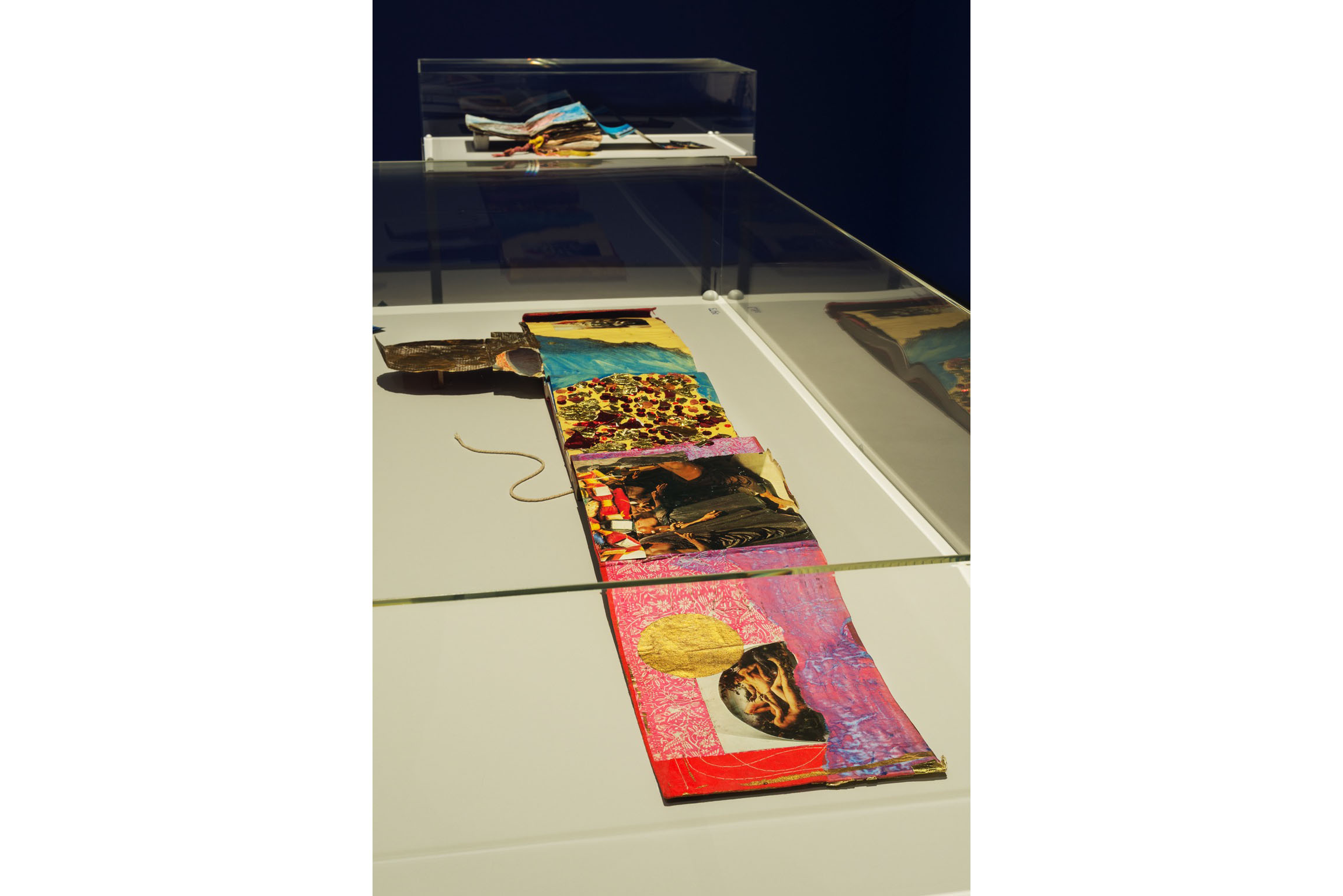 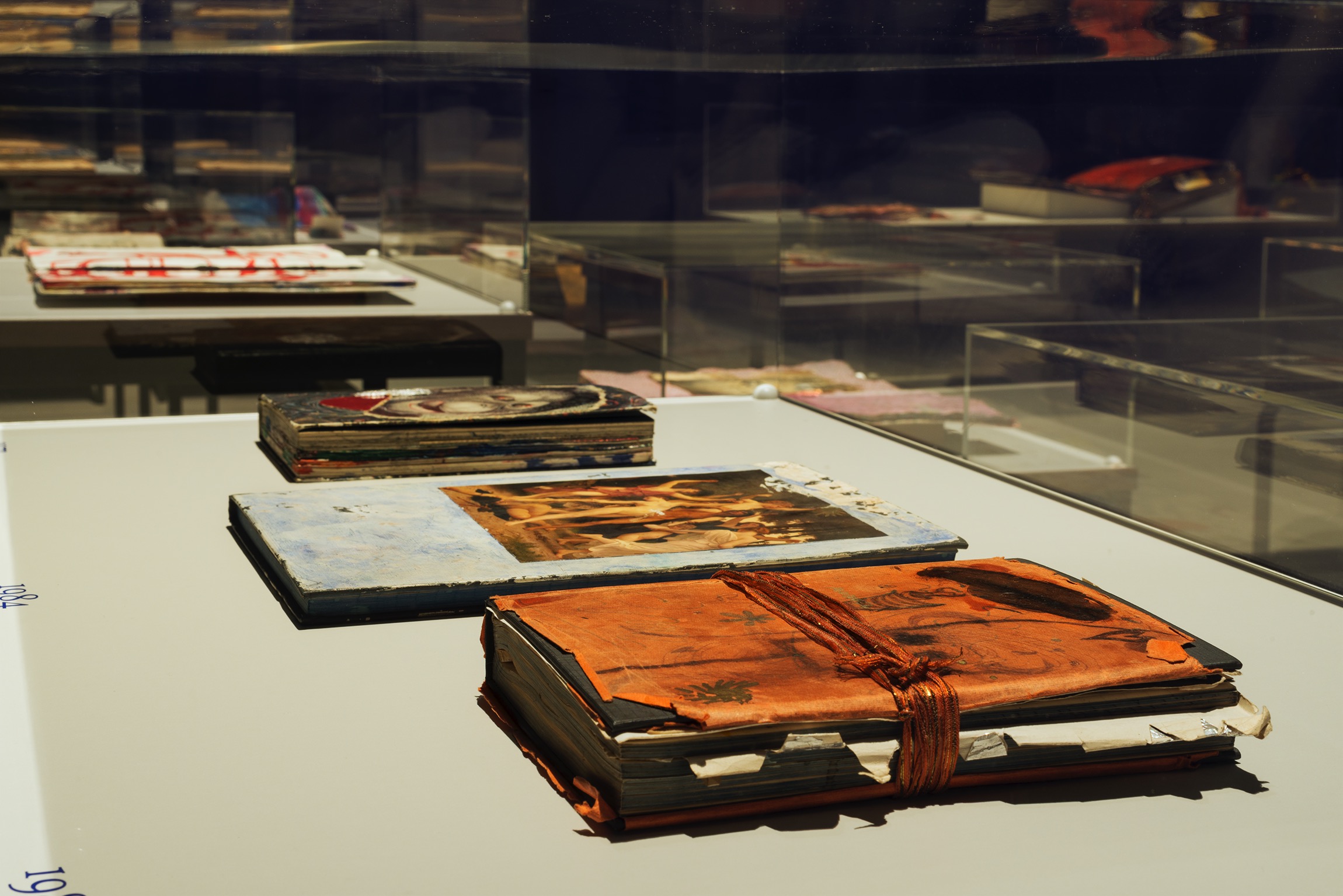 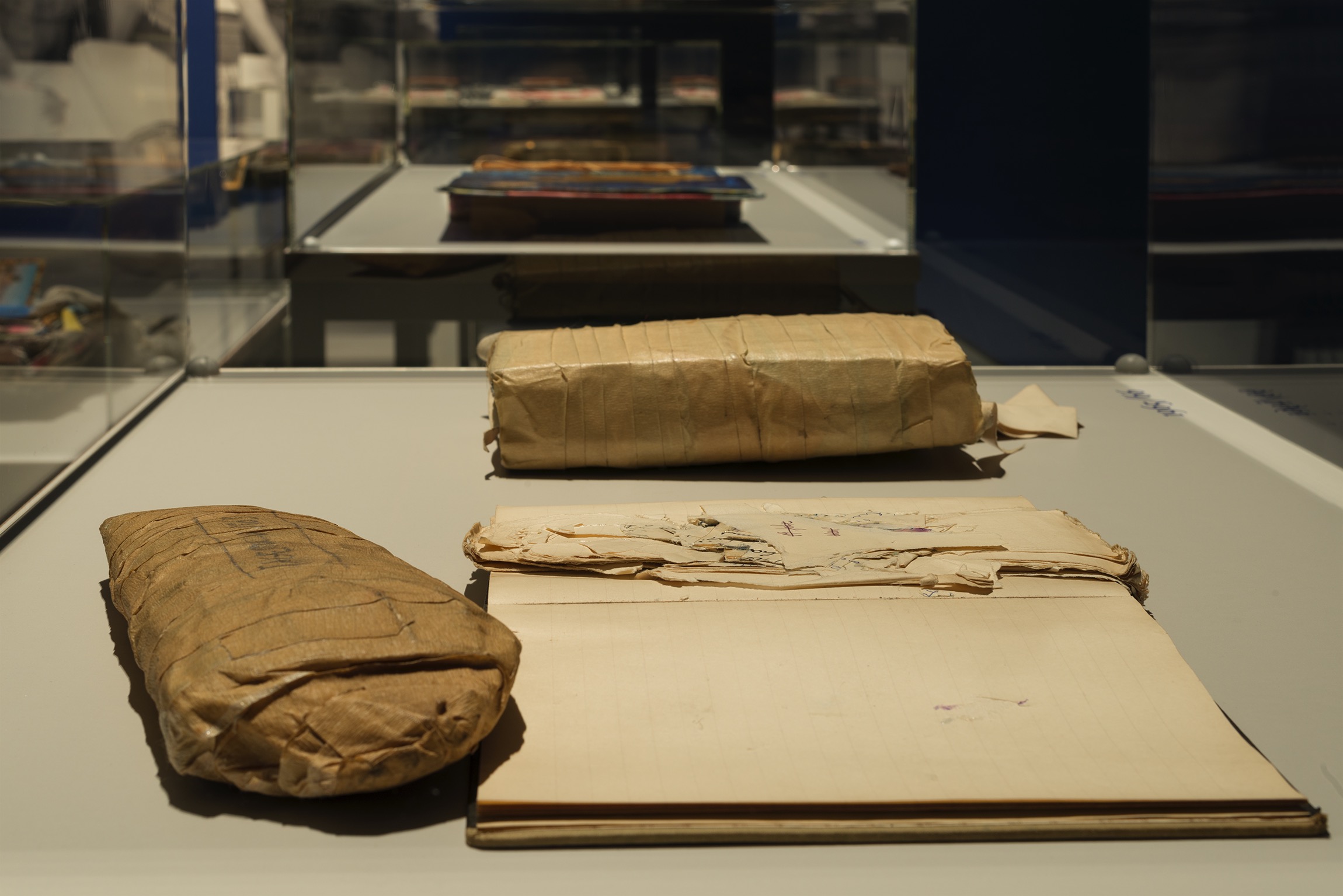 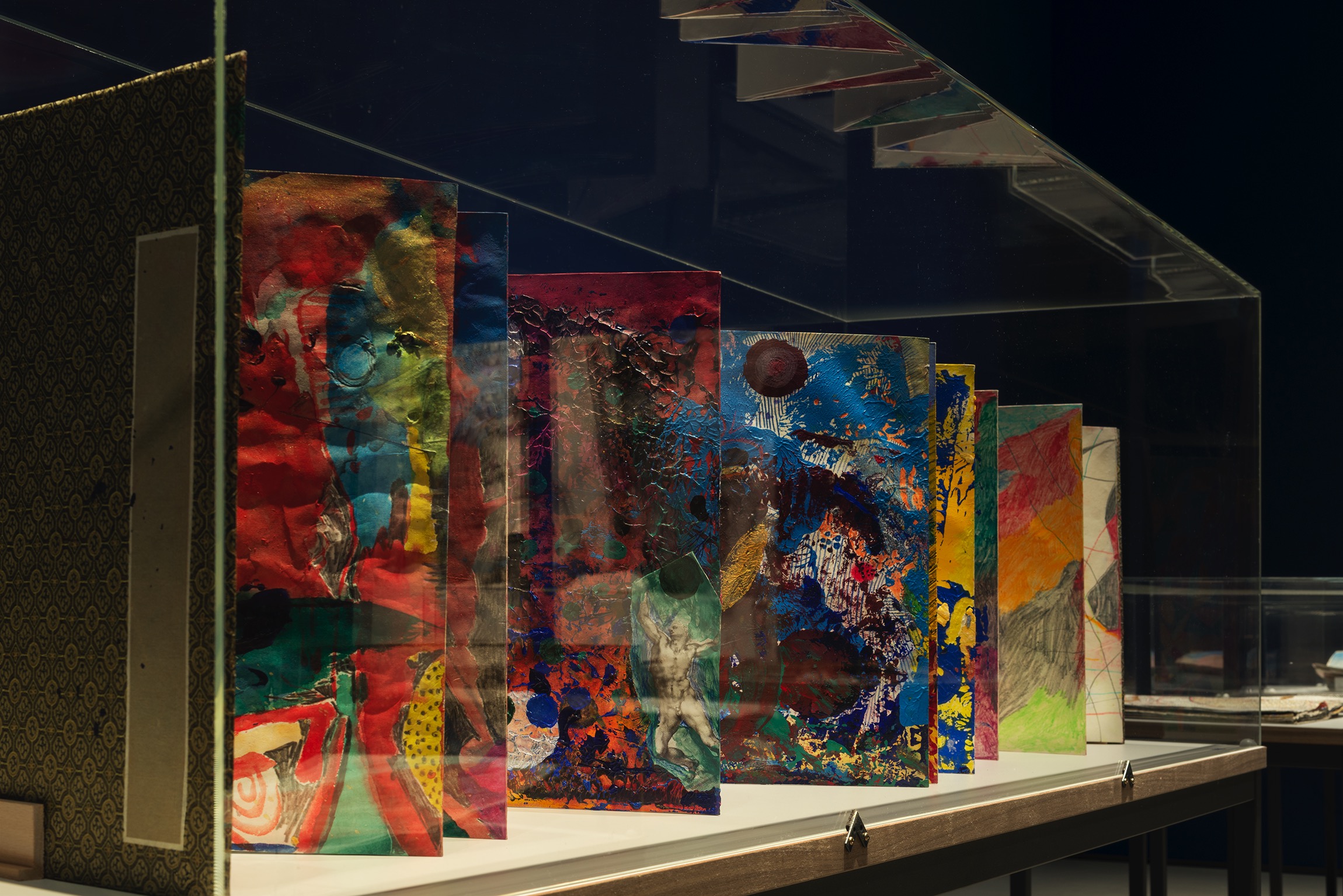 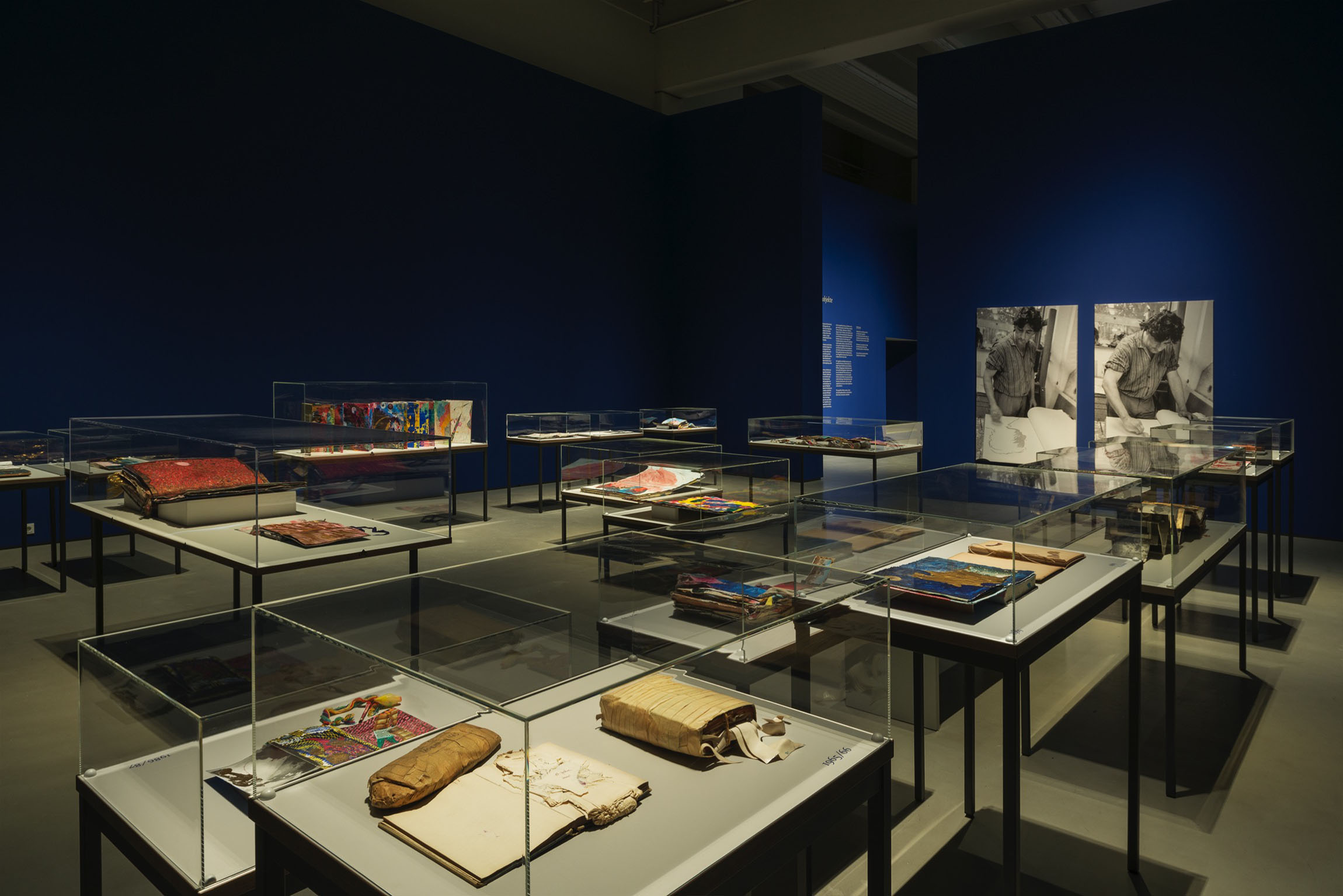 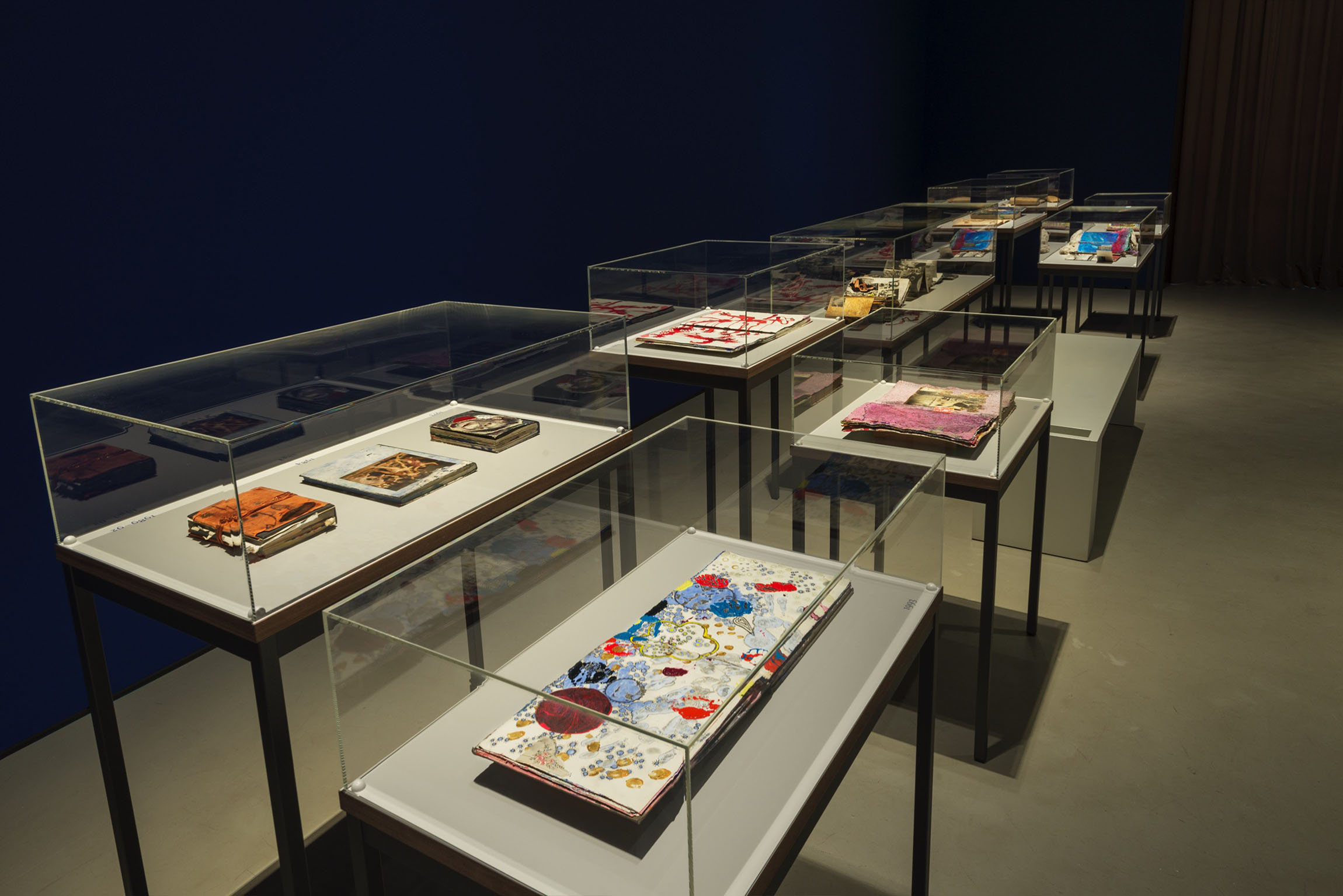 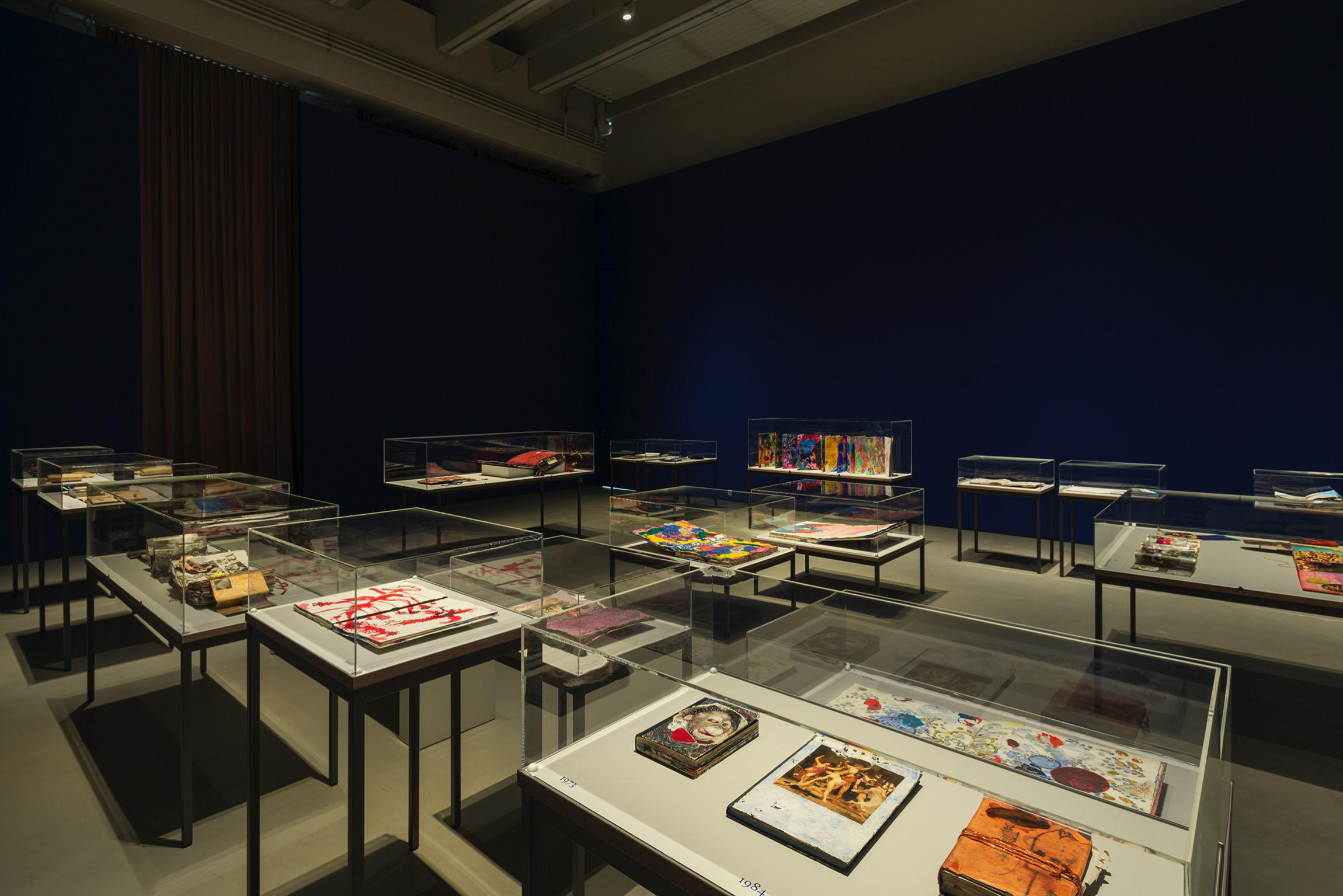 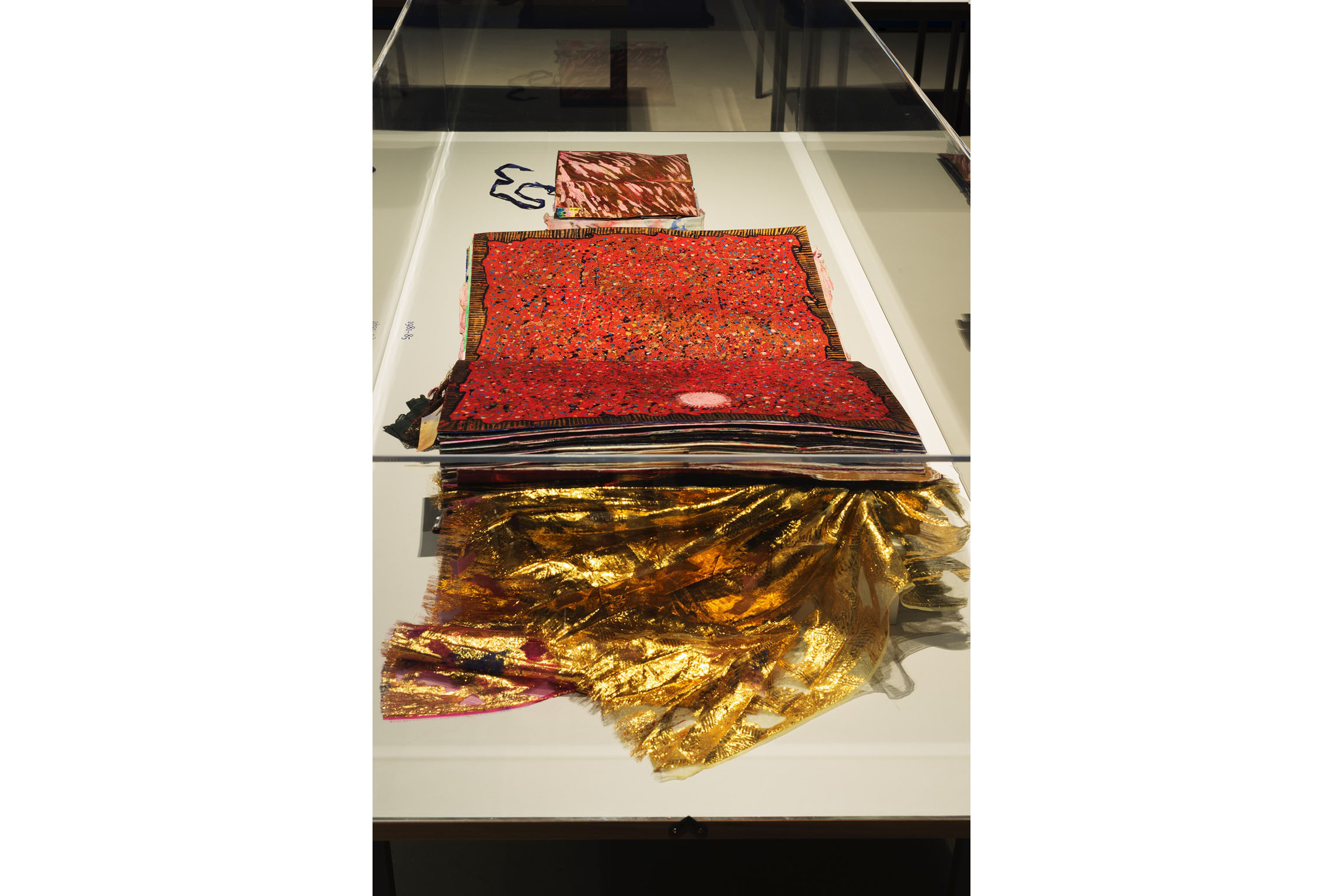 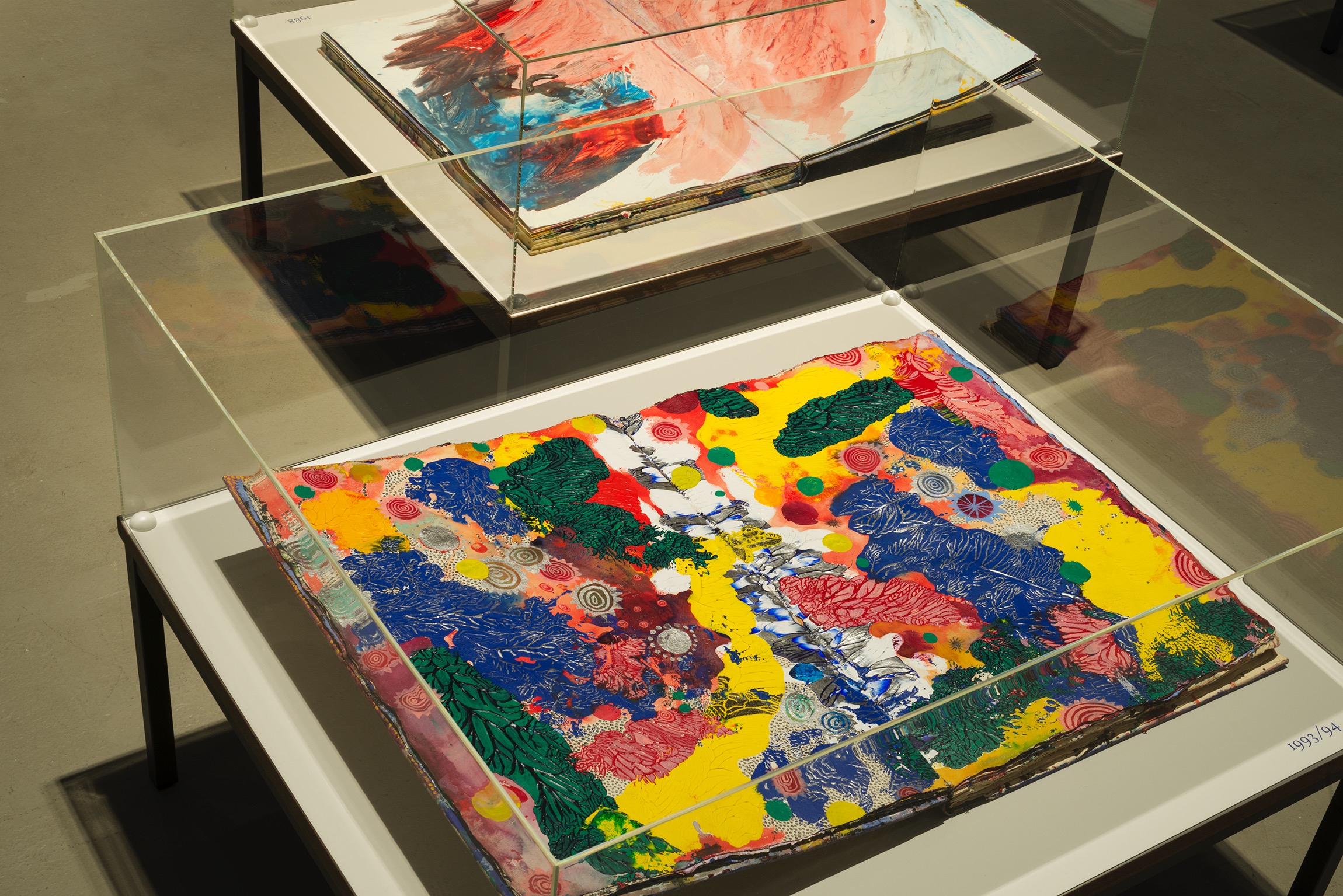 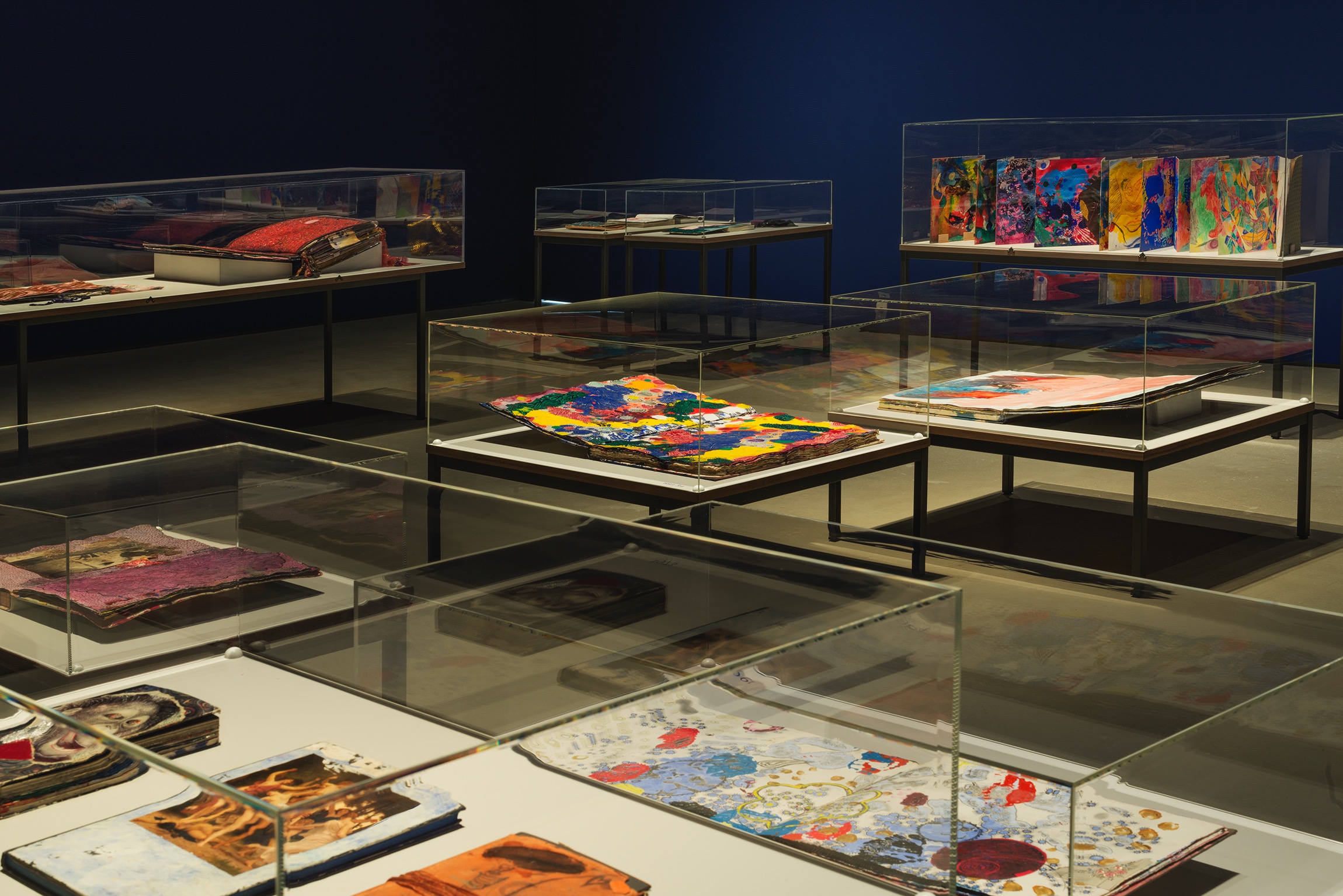 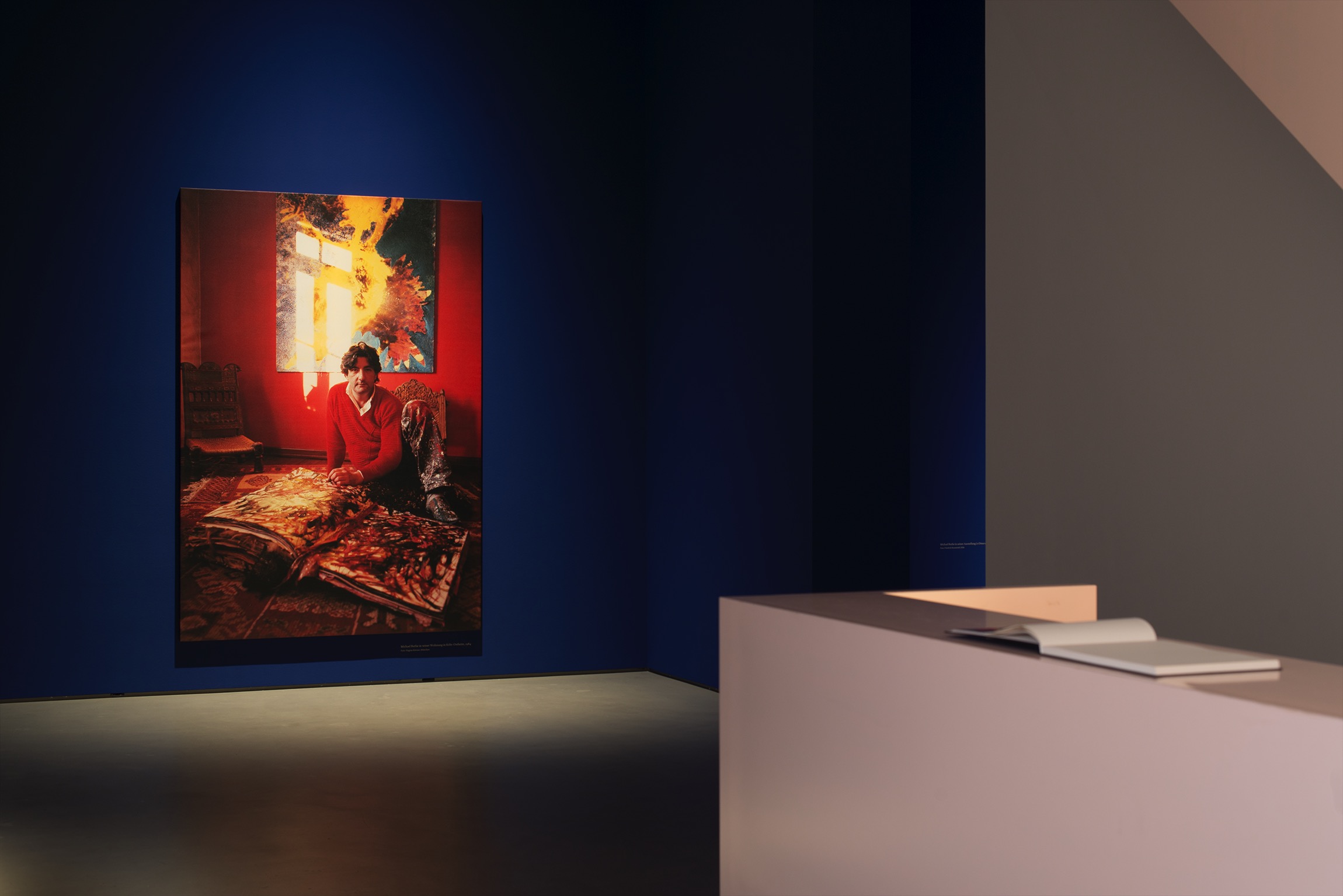 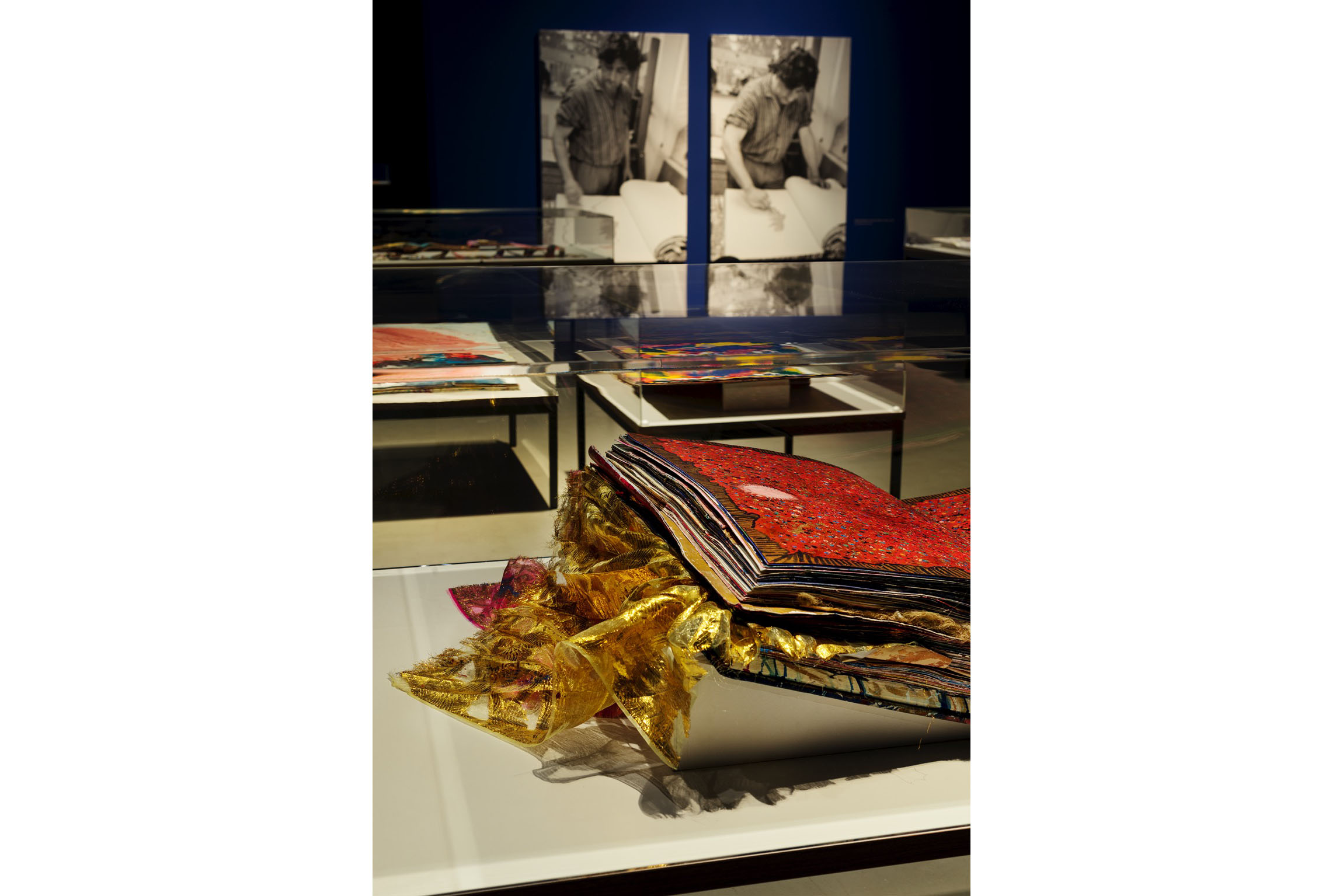 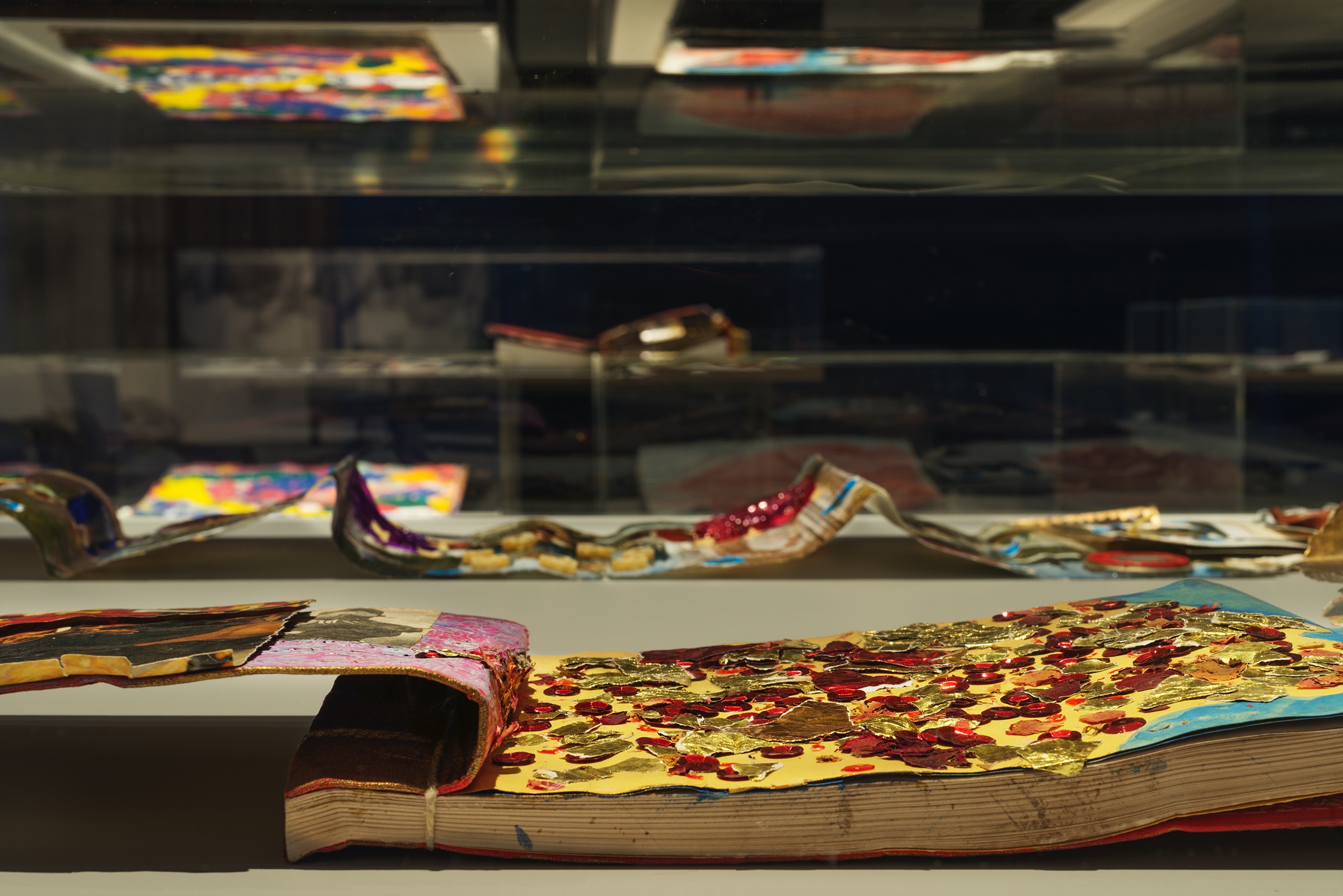 Michael Buthe, celebrated twice in 2019 on the 75th anniversary of his birth and 25th anniversary of his death, is one of the most fascinating characters in post-war German art. Sculptures and space-consuming installations, highly innovative assemblages and spiritually charged paintings by this four-time documenta participant have found their way into the collections of many German museums and major institutions abroad, including Tate Modern and the Centre Georges Pompidou.

Buthe’s brightly hued oeuvre, far from being a casual, aesthetically motivated response to the “Orient”, was rooted in a conceptual approach to art, and no aspect of his work illustrates this as powerfully and movingly as what he called his “diaries”. These artists’ books – for which Buthe used drawing, painting, collage, assemblage, but almost never writing – not only provide us with abundant insights into the artist’s work in general, but mirror to the story of his life: the formative years as a teenager and student in Höxter and Kassel (until 1968), the open studio in Cologne where artist friends came and went at all times (until his death in 1994), his second home in Marrakesh (from 1986), and, of course, his adventurous globetrotting.

Indeed, these diaries and book objects testify to how intricately interwoven art and life were for Buthe, a principle that many of his contemporaries proclaimed but few pursued with such rigor.

As the diaries are such a seismographic record of his artistic and biographical development, he sold or gave away only a handful of them: most remained in his possession until his early death and can now be exhibited for the first time, almost in their entirety, thanks to the generous support of the Michael Buthe Estate in Cologne.

The first book objects date from the early 1960s. Buthe wrapped tape around notebooks he had found or acquired second-hand so that their contents were no longer revealed but mystified. Other diaries from this early period testify to his roots in conceptual art and arte povera: the materials are cheap, rudimentary, yet voluptuous.

Buthe’s notorious trips to Morocco in 1970 and 1972 were an artistic turning point with implications for his motifs, his style, and the materials he used. His work became more playful, more colorful, more opulent, and richer in contrasts. Gradually he liberated his paintings and drawings from the rigid constraints of their substrate: his literally sculptural use of collage and assemblage started to invade the space beyond the two-dimensional surface – the picture acquired a body. The collage-based diaries, which often fold out into objects many times the size of the original book, grew out of Buthe’s intense curiosity about the creative potential of collage in the 1970s. Their genesis relates inextricably to those lengthy journeys which took Buthe to countries outside Europe, including Nigeria, Afghanistan, Uzbekistan, Egypt, Kuwait, Tunisia, Israel, Jordan, and Iran. Here Buthe resorted to collage as a faster technique than drawing or painting to capture the flood of fleeting visual impressions: the diaries became portable studios, enabling Buthe to work on a train or at an airport. The artist and his diaries became inseparable and travelled with him at all times: for the biggest book in this exhibition, his companion Hannelore Kunert created a tailor-made bag.

The diaries, thus, form an integral part of the Michael Buthe cosmos. They illustrate the full spectrum of his impressions, experiences, encounters, artistic concerns, and threads of evolution. They provide a key to the work and life of an exceptional artist. Actor Udo Kier, close friend and occasional collaborator of Buthe, puts it nicely: “There are ways to reconstruct what Michael Buthe experienced. But how he felt about it can only be understood through the diaries.”

The exhibits, unless otherwise indicated, belong to the Michael Buthe Estate. They are not for sale.

An elaborate facsimile edition of the diary Der Vorfall mit dem Körbchen [The Incident with the Basket] (1989–91) will be published in a limited and numbered edition to mark the exhibition. It can be purchased at the gallery.

This summer, Verlag der Buchhandlung Walther König will publishing the first volume of the Buthe Catalogue Raisonné. It is devoted to the artist’s diaries and book objects. 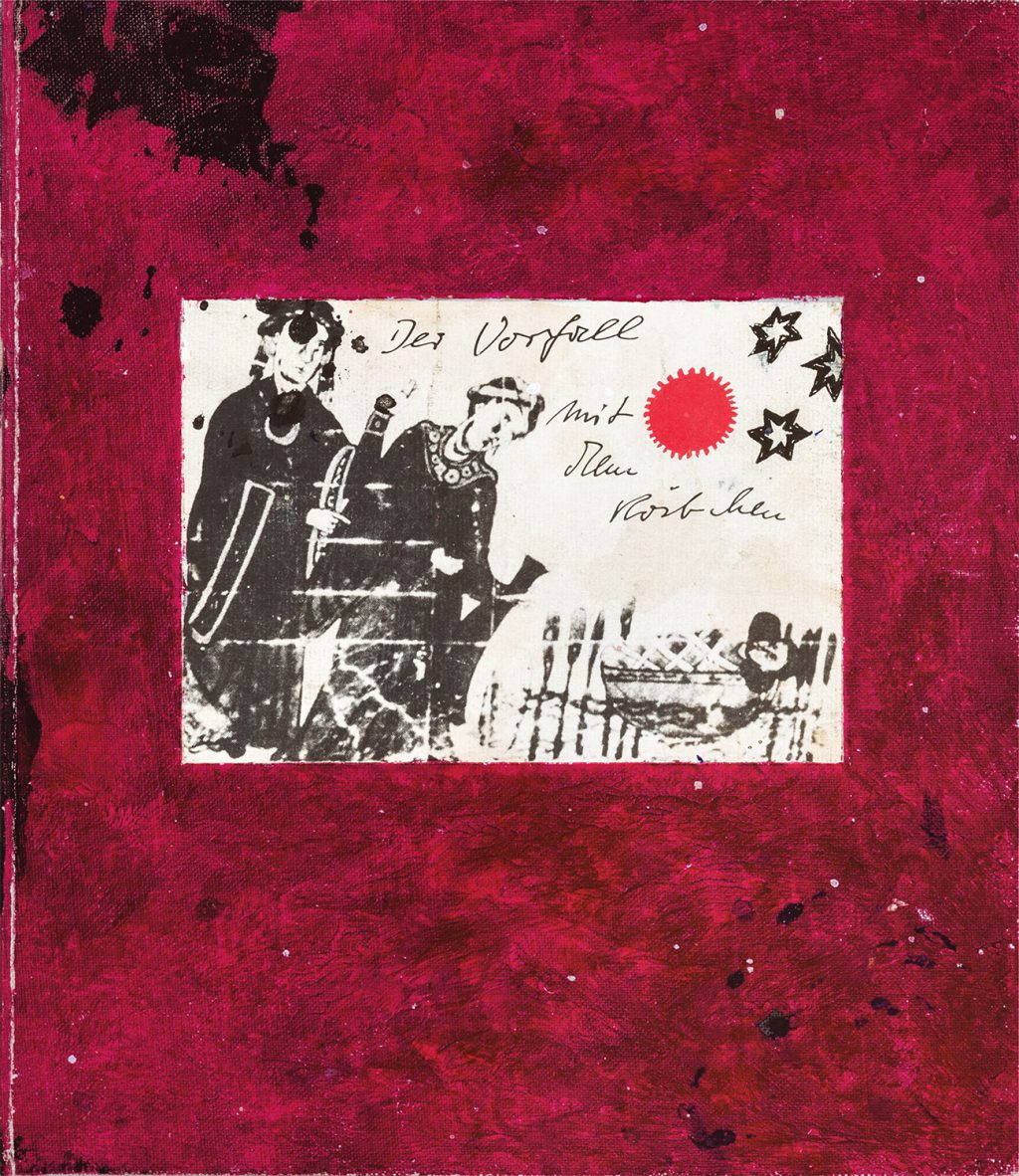